The Canucks won't run out of goaltenders this season 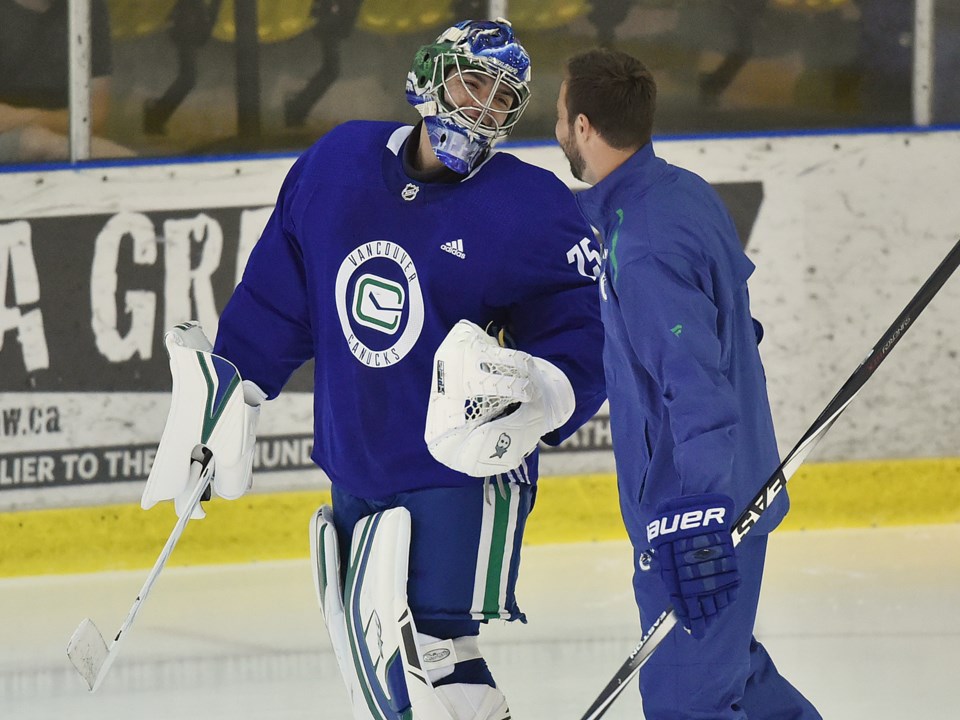 Michael DiPietro’s first NHL start was one of the oddest stories of last season. Thanks to a series of unfortunate events that would make Lemony Snicket jealous, the 19-year-old DiPietro made his NHL debut against the San Jose Sharks, the highest-scoring team in the Western Conference.

DiPietro is a solid prospect, proving himself with another great season in the OHL and a lights-out performance in the World Juniors for Team Canada, where he posted a .952 save percentage and a tournament-leading 1.23 goals against average. He wasn’t, however, ready for the NHL.

The Sharks lit DiPietro up for seven goals on 24 shots, including three goals on the first five shots he faced. What made it worse is that DiPietro didn’t have an escape hatch: Jacob Markstrom was on the bench, but wasn’t game-ready with an injury suffered during the morning skate. DiPietro was the Canucks’ only option.

“Everybody talks about the size and the speed and how hard shots will be,” said DiPietro about the experience, “but not many people talk about how much higher the IQ is and how much faster things occur, how something is always generated and things are done with a purpose.”

DiPietro took the tough experience in stride and has already made adjustments to his game, though he admits he tried to rush some of those adjustments and struggled when he first got back to the OHL.

“Sometimes you can get a little ahead of yourself, you want to just fix everything at once, but it’ll eventually happen with time,” he said. “That’ll come with experience. I'm not not going to fix it just in one day and I'm not going to snap my fingers and everything's fixed. I know it takes time and I'm ready to put the work in.”

Meanwhile, the Canucks have made adjustments as well, hoping to avoid putting an unprepared goaltender into a similar situation next season.

The reason why DiPietro got the start is simple: the Canucks ran out of goaltenders. AHL veteran Richard Bachman suffered a season-ending injury in December and wasn’t replaced with a goaltender on an NHL contract. Canucks general manager Jim Benning traded backup Anders Nilsson to the Ottawa Senators in order to call up Thatcher Demko to the NHL, but the goaltender that came back in the trade, Mike McKenna, was claimed off waivers by the Philadelphia Flyers.

That left just three goaltenders on an NHL contract: Markstrom, Demko, and DiPietro. Demko suffered an injury a week before the game against the Sharks, Markstrom was pulled out for a lower-body injury, and DiPietro was the only one left.

Thanks to a couple signings over the last few months, the Canucks look a little more prepared heading into next season.

In April, the Canucks signed Jake Kielly, who was a finalist for the Mike Richter Award as the NCAA’s best goaltender last season. Then, on the first day of free agency, the Canucks added 26-year-old Zane McIntyre, an experienced AHL goaltender with a few NHL games under his belt.

Along with Markstrom, Demko, DiPietro, and Bachman, that makes six goaltenders on NHL contracts for the Canucks, which should provide ample coverage at both the NHL and AHL level in case of injuries.

Markstrom and Demko should split starts in the NHL, while DiPietro and McIntyre should do the same for the Utica Comets in the AHL. Kielly will most likely start for the Kalamazoo Wings in the ECHL. That leaves Bachman either filling a mentor role as a third goaltender in Utica or getting loaned to another AHL team.

If either Markstrom or Demko get injured, the Canucks will have three clear options for a callup in DiPietro, McIntyre, and Bachman. It’s possible that DiPietro will get another chance in the NHL next season, but this time the Canucks can take their time and make sure he’s ready first.

I’m dropping the gloves with Steve Simmons for erroneously reporting that Don Cherry wouldn’t be back next season on Hockey Night in Canada. While it’s long past time that Cherry retired, rumour-mongering doesn’t help anyone.

A tap of the stick to the Canucks prospects invited to represent their countries at the World Junior Summer Showcase: Jett Woo, Carson Focht, Nils Hoglander, and Toni Utunen.