His shop is tight and tidy, tucked into an unassuming mini-mall in Yaletown. He’s usually bent over his brightly lit desk, working with tiny tools and tinier parts. He has a soft German accent, even though he’s lived in Vancouver half his life.
Nov 14, 2016 11:53 AM By: Grant Lawrence 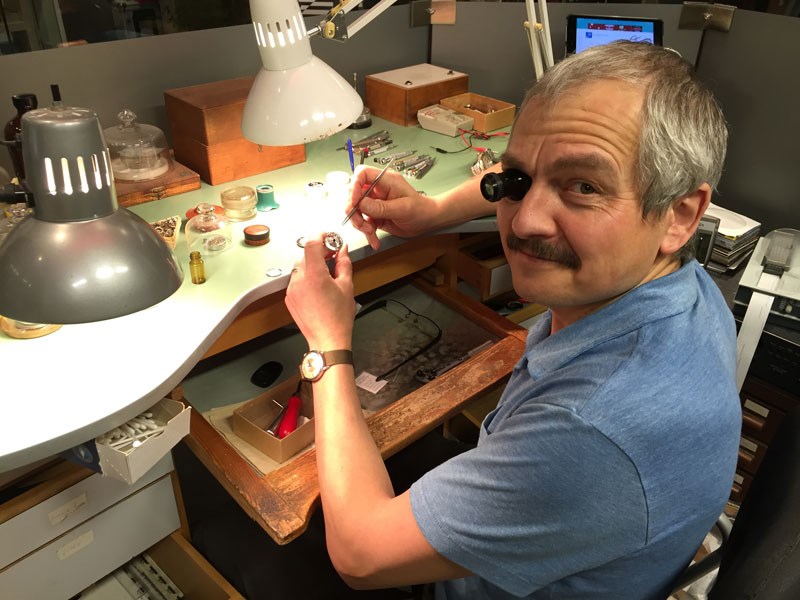 
His shop is tight and tidy, tucked into an unassuming mini-mall in Yaletown. He’s usually bent over his brightly lit desk, working with tiny tools and tinier parts. He has a soft German accent, even though he’s lived in Vancouver half his life. Now in his early fifties, he exudes a natural calmness – a good aura to have when you’re the man who pretty much single-handedly keeps Vancouver ticking. He is Norbert Zerbes, the self-proclaimed German Watchmaker.

“I’ve always been attracted to small things, ever since I was a boy,” Norbert says gently, as he works on a customer’s quartz. He came of age in Transylvania, but his family is from Germany and he considers himself German. “Growing up, I collected butterflies, beetles, moths and dragonflies. I did taxidermy and kept dead squirrels in the freezer – things like that”.

As a young adult, Norbert studied watchmaking at a school in Transylvania before moving to Germany to put his education into practice. After falling in love with the West Coast on a trip, he relocated to Vancouver to start his business. Don’t be fooled by the name of his shop, though: Norbert doesn’t actually make watches. “The term ‘watchmaker’ goes back to the 1800s,” he explains. “It simply means to restore or repair watches.”

And that’s just what Norbert has been doing in Vancouver, five days a week, for the past 25 years. He’s also one of the last of his kind.  I’ve been taking my various crappy watches to Norbert for years. “I service a lot of antique watches – pocket watches; vintage watches from the 1930s, ’40s and ’50s – but I do modern watches like yours, too,” he says. “Whatever is worth repairing.”

In other words, despite having made an exception for my Tintin timepiece, don’t bother bringing him that fake Rolex you bought for a couple of American greenbacks in Phuket. But if your Timex needs a new battery, Norbert will help you out.

Occasionally, a customer will show up with an extremely valuable piece. “A bike courier once came in with an 18-karat gold Patek Phillipe that was worth a quarter of a million dollars.”

Despite their staggering value, some watches also come with a serious potential health hazard. “Usually, any watch that is pre-1960 and that glows in the dark is radioactive, still to this day. It’s the luminous paint, and if the paint crumbles, it can be very dangerous. I always make sure I wash my hands and avoid touching my nose or mouth. You don’t want to ingest it.”

Besides poison, you’d think the ergonomics of watchmaking wouldn’t be great. Norbert spends most of his day hunched over, staring down at parts that are often smaller than a match head and contain hundreds of intricacies. Norbert balances out his sedentary livelihood by tackling the Grouse Grind after work, three nights a week, 52 weeks a year. He’s done the Grind over 3,000 times.

Back at the shop, the smartphone revolution (not to mention the Apple Watch) hasn’t been a distraction. “I’m busier than ever, likely because there are so few watchmakers, not only here in Vancouver but in North America. It’s a job I love to do, so I’m lucky. I like coming in to work.”

Norbert often listens to Tom Waits while working on a particularly difficult watch – it can sometimes take 10 or 15 tries to get a miniscule screw to catch an even smaller groove. Quoting a lyric in the Waits song “Raised Right Men,” Norbert smiles when he shares the secret to being a watchmaker: “You need the patience of a glacier”.