The longer Jacob Markstrom’s shutout drought endured, the less he cared about it

The celebration of Jacob Markstrom’s first career NHL shutout seemed short and to the point. His teammates streamed out onto the ice to congratulate him, but once they got off the ice, they slipped into their usual post-game routine.
Dec 6, 2017 2:30 PM By: Daniel Wagner 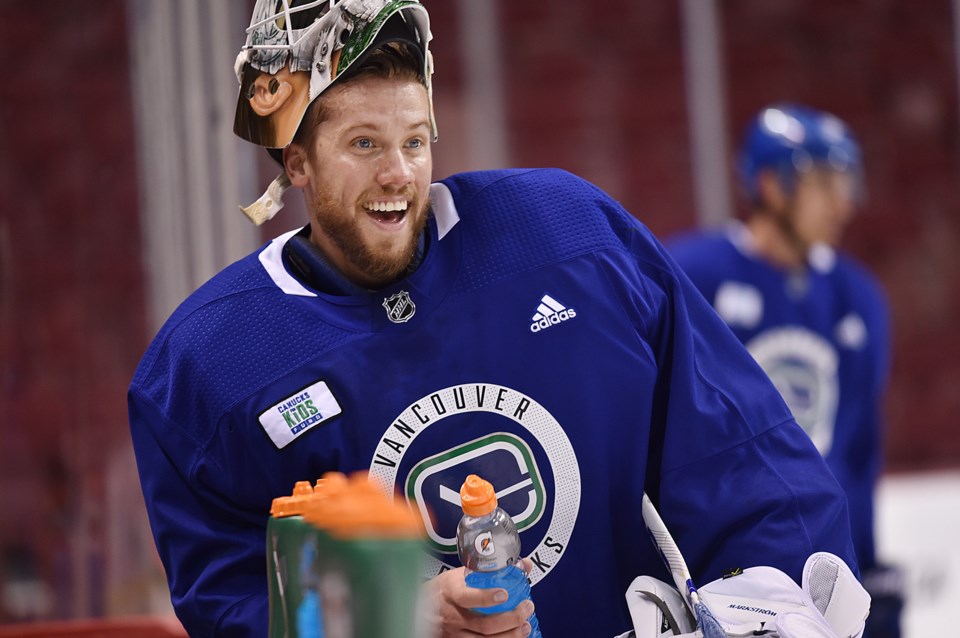 The celebration of Jacob Markstrom’s first career NHL shutout seemed short and to the point. His teammates streamed out onto the ice to congratulate him, but once they got off the ice, they slipped into their usual post-game routine.

Markstrom’s teammates were certainly happy for him to break the goose egg of having no goose eggs — “With the shutout on the line there, we wanted to play for Marky,” said Sam Gagner after the game — but Markstrom himself seemed pretty nonplussed.

About a month earlier, I asked Markstrom if never having a shutout ever weighed on his mind and he just laughed.

It might have seemed like a cliche answer, a classic example of making sure to put the team first in any public communication, but it became clear on Tuesday night that the individual accomplishment truly paled in comparison to winning the game.

“I think I’m just more happy about not getting the question anymore from you guys, to be honest,” he said to the media scrum after posting his first career shutout, and it wasn’t entirely clear if he was joking, half-joking, or some other smaller percentage of joking.

“You want to help the guys win and if you don’t let in any goals, that’s a good way to do it,” he continued.

If you want proof that the shutout streak didn’t matter that much to him, just look at his reaction at the end of the game against the Toronto Maple Leafs, after he lost the shutout with just three minutes remaining. After time expired, he emphatically pumped both his fists in exultation. There was no disappointment in that gesture, no feeling sorry for himself. There was just joy in a hard-fought victory.

After the game he even joked about being allowed to let one in because his teammates scored two goals to give him a cushion. He then reiterated that he wasn’t worried about the shutout streak.

“Obviously, you want to get rid of it and make it happen,” he added, “but I’ll take this, a win, any day of the week.”

On Tuesday, however, he admitted that wasn’t always his mindset.

“Early in the career, I had a couple really close ones,” he said. “I was 21 years old, and then you really wanted it, a shutout in the NHL, and then it just kinda went away, that urge… I just wanted to win hockey games. I just kinda accepted that I ain’t getting one.”

He was actually 24 when he came closest to posting a shutout. In March during the 2013-14 season with the Florida Panthers, he took shutouts late into the third period in two games against the Carolina Hurricanes and New York Rangers. In both games, he gave up a late third period goal, similar to Saturday’s game against the Leafs.

For Markstrom, pushing aside any thoughts of a shutout and focussing solely on team success was just part of becoming a more mature player, and that approach has likely helped the mental side of his game. Another boon this season: having another strong goaltender and great teammate in Anders Nilsson to help push him.

“With me and Nils, it’s wide open who’s going to get the net,” said Markstrom. “You gotta play good to stay in there, so it’s really healthy competition. It’s a new thing for me at this level.

“He’s a great guy. He works really hard in practice. We can talk and we ask questions. During games I talk a bit more than he does, I think, between periods. I ask him stuff from his point of view. It’s a team game, we need both of us. He started the year really well, so it’s a good push to have.”

Now he wants to take that team-first approach to the game and instill it in the younger players entering the Canucks’ organization. He talked about wanting to be a leader and the release of his desire to post a shutout can serve as an object lesson: individual milestones and achievements are certainly fun and something the team can rally around, but feeling successful when the team is successful is more important.

“Don’t get too high and don’t get too low. It’s really cliche, but it’s important for us with a lot of young players to kinda know that and don’t get too happy you won three in a row, don’t celebrate in the room: get in the gym, stretch, take care of your body, we’ve got a big game coming up in two days.”

Talking to Markstrom, it really does seem like this was just another win for him, that he was truly just happy that he won’t be asked about shutouts anymore. Hearing him talk about the change from his younger years when he would have cared a lot more also gives an insight into the type of culture that Travis Green and the Canucks are trying to build.