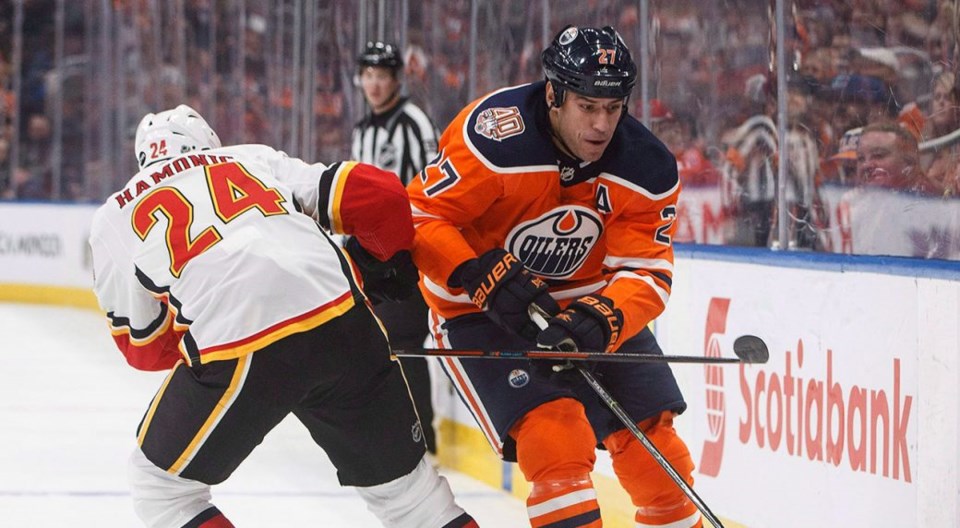 Loui Eriksson has one of the worst contracts in the NHL. This isn’t a controversial statement: he has three years left on his six-year deal, with a cap hit of $6 million a year, which makes him one of the top-60 highest paid players in the NHL, but he’s performed like a third-line winger for the Canucks.

To top it off, most of Eriksson’s contract is made up of signing bonuses, making it completely impractical to buy out. The contract has become an albatross, taking up a large chunk of cap space that could be put to better use.

There’s a reason why it’s “one of” the worst contracts, however: there are worse ones out there. Free agency is where NHL general managers tend to make their biggest mistakes, throwing more money than they should at aging players that are more likely to get worse than get better.

One of the few that is worse belongs to Milan Lucic.

Like Eriksson, Lucic’s contract has a $6 million cap hit and is mostly signings bonuses, making it very difficult to buy out. Also like Eriksson, Lucic has failed to live up to his contract, scoring just six goals last for the Edmonton Oilers last season and sliding down to the third line on a team desperate for scoring wingers.

What makes Lucic’s contract worse is that it’s for one more year than Eriksson’s and has a no-movement clause that would require Lucic to get protected in the upcoming Seattle expansion draft. Since there’s a limit on the number of players teams can protect in expansion, that means another player, one that is likely younger and better than Lucic, would have to be exposed.

It’s an awful contract that made Lucic nigh-untradeable, until the Oilers somehow managed to trade Lucic.

The Oilers sent Lucic to the Calgary Flames for James Neal, who is also on an unpalatable contract. Neal was signed just last year to a five-year deal worth $5.75 million per year. In the first year of his contract, Neal fell off a cliff. For the first time in his career, Neal scored fewer than 20 goals and he wasn’t even close, managing just seven goals in 63 games.

That doesn’t really capture how bad Neal was for the Flames. He was the only Flames forward that saw the Flames get out-chanced and out-shot when he was on the ice at even-strength. He gave up a lot defensively and did next-to-nothing offensively. He was a liability, to the point that he was a healthy scratch in the deciding Game 5 in the Flames’ first round series against the Colorado Avalanche.

So, neither player was very good last season, but both the Flames and the Oilers are gambling on each finding new life on a new team. The Flames want more grit in their bottom six and Lucic will provide that, while the Oilers are constantly looking for a goalscorer to play alongside Connor McDavid. There’s a chance that Neal could bounce back and score 20 goals again.

The deal makes more sense for the Oilers than it does for the Flames. The Flames get the worse contract, even though the Oilers retained $750,000 of Lucic’s deal to lower his cap hit. The probability of Neal bouncing back is higher than that of Lucic, but even if he doesn’t, Neal’s contract is a lot easier to buy out with no signing bonuses. On top of that, Neal doesn’t have a no-movement clause, so he can be exposed in the expansion draft.

Perhaps that’s why the Flames negotiated one extra condition. Perhaps worried that Neal will find his form and make them look foolish, the Flames negotiated for a conditional third-round pick to go their way if Neal outscores Lucic by ten goals. Quite frankly, every one-for-one trade should include a similar clause, just to make things more fun.

What is the takeaway for the Canucks? It means that Eriksson can be traded, if they want to move him. It just might require finding a terrible contract that another team wants to get rid of, but is just slightly less bad than Eriksson’s, along with a little creativity. What have Brandon Dubinsky, Justin Abdelkader, and Andrew Ladd been up to lately?

A tap of the stick to Mike Gillis, who opened up about his tenure as the Canucks’ general manager at the TeamSnap Hockey Coaches Conference in Toronto last week, giving insights into what worked and didn’t work with the Canucks and what he believes is the future of sports management. It was a rare peek behind the curtain to what happens in an NHL teams' front office.

I’m dropping the gloves with the Calgary Flames’ new arena deal with the city of Calgary. The supposed benefits to the city are misleading and city council has less than a week to make a decision on the deal. Taxpayers need to stop paying for arenas for billionaires.