The Paper Feature: The Sedins are irreplaceable, but someone has to score goals next season

A year ago, the Canucks were in a very similar position to where they are now. They had just finished the season in the NHL’s basement and had several veteran players exit the roster.

The Canucks traded Alex Burrows and Jannik Hansen. Nikita Tryamkin bolted for the KHL. Luca Sbisa was claimed by the Vegas Golden Knights in the expansion draft. Ryan Miller left in free agency.

On the first day of free agency, Jim Benning directly replaced the five departing players with five veterans: Sam Gagner, Alex Burmistrov, Patrick Wiercioch, Michael Del Zotto, and Anders Nilsson. These five players had varying levels of success — Wiercioch spent the entire season in the AHL, while Burmistrov was released from his contract and went back to Russia — but the intent was clear to replace the players they lost.

Once again, the Canucks have veteran players leaving the roster. The difference is that they are the best players in franchise history, who are a little more difficult to replace.

“It doesn’t happen very often where two of your top scorers are leaving the team,” acknowledged Canucks head coach Travis Green to the media on Monday. “I think to sit here and say some young guys are just going to fill those holes, we don’t know yet.”

“We need Bo Horvat to keep improving,” he continued. “We need Adam Gaudette to have a great summer. Brock Boeser, can he get better? Right throughout our lineup, you can almost go player-by-player and that’s the only way to improve. Newer players that come in, younger players that are trying to make the team. What kind of impact can they have?”

It’s asking a lot of the Canucks young core like Bo Horvat and Brock Boeser, or top prospects like Elias Pettersson and Jonathan Dahlen to step up and fill the shoes of two giants like the Sedins, but the alternative is fraught with risk: free agency. The departing Sedins leave $14 million in cap space behind, with the salary cap itself expected to go up by $3-7 million.

That kind of cap space opens the door for seeking out a quick fix by throwing money at the problem. Could the Canucks convince John Tavares to come to Vancouver for $11-12 million per year on a long-term deal? Should they or would that lead to massive salary cap problems in the future?

“We’re not going to replace Daniel and Henrik’s leadership in that locker room or their production on the ice,” said President of Hockey Operations Trevor Linden. “Rushing out and trying to do that I think is...I think we have to be very careful with how we approach that.”

“The thought of replacing 100 points and what they bring to the organization in leadership...I don’t think it’s replaceable,” he added.

The real issue is that the Canucks don’t just need to replace the 100 points the Sedins are taking with them into retirement. The Canucks had their 100 points this past season and were still one of the worst teams in the NHL. They need to find more than 100 points from some combination of young players stepping up or free agent acquisitions.

The Canucks were one of the lowest-scoring teams in the league last season and lost their second and third-leading scorers. It’s not enough to replace those points; the Canucks need a massive improvement to their offence heading into next season. 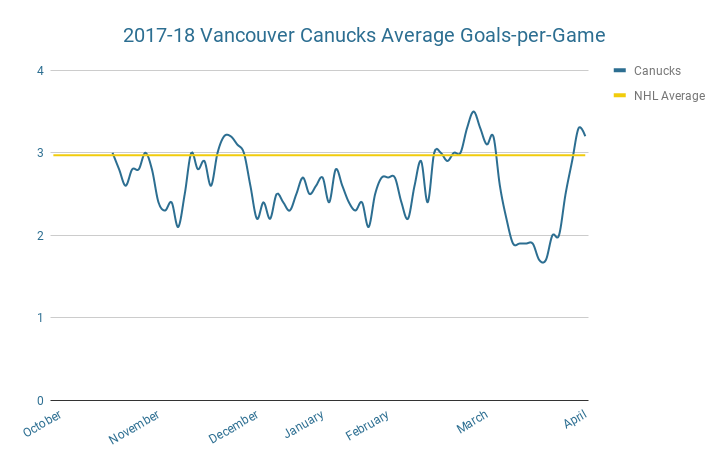 A tap of the stick to Ben Hutton, who faced the toughest media scrum of the day on Monday when the Canucks cleaned out their lockers and headed home. He stood in, taking tough questions about his conditioning, difficult season, and relationship with Travis Green and didn’t back down.

I’m dropping the gloves with NBC, who couldn’t clear some programming conflicts and will be airing two playoff games in the first round on the Golf Channel, of all places. That might be a bad omen for the teams involved — the Lightning, Devils, Ducks, and Sharks — suggesting that they might be playing golf a little earlier than planned.

15 - Thomas Vanek has been lights out for the Columbus Blue Jackets, putting up 7 goals and 15 points in 19 games since the trade deadline. While it remains to be seen how he performs in the playoffs, it’s beginning to look like a few more teams should have been interested in the savvy veteran, driving up the trade offers for the Canucks.