The Paper Feature: With trade deadline a month away, it’s time for Canucks to make moves 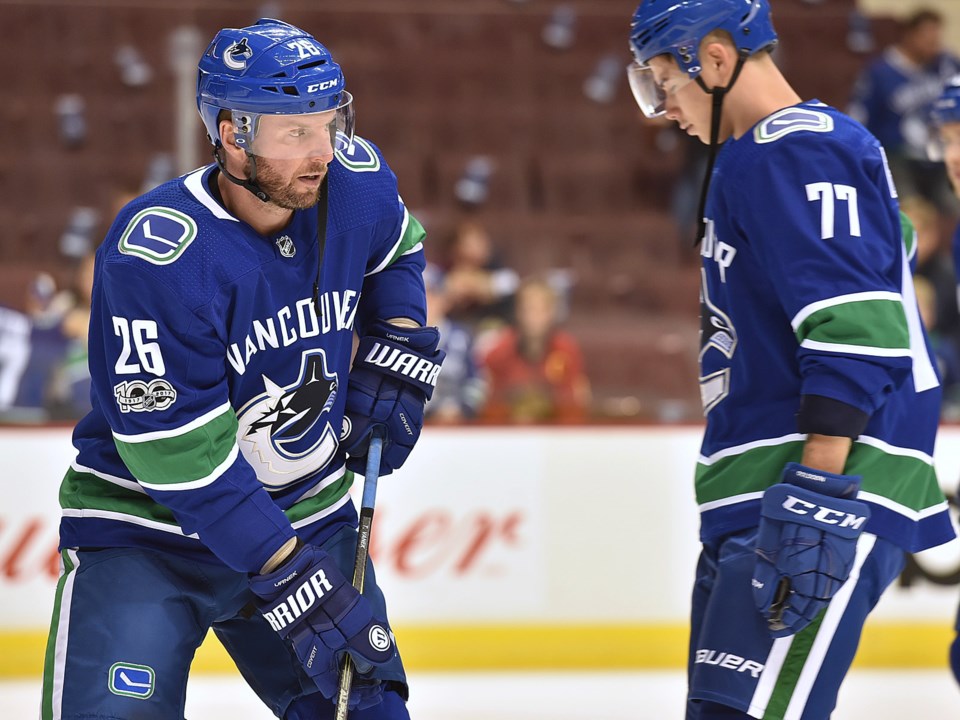 The Canucks should be looking to move Thomas Vanek at the trade deadline for draft picks and/or a prospect like Nikolay Goldobin.Dan Toulgoet / Vancouver Courier

The Canucks are not going to make the playoffs.

I apologize if that comes as a shock to you, though it really shouldn’t at this point of the season. Entering Tuesday night’s game against the Los Angeles Kings, the Canucks were sitting in 28th place in the NHL. According to Sports Club Stats, their odds of making the playoffs at this point are an incredibly slim 0.1%.

Making the playoff at this point would require an absurd run in the back half of the season, the likes of which this team simply is not capable. The Canucks have scored the 7th fewest goals in the NHL and allowed the fifth most.

If the Canucks were to make the pIayoffs this season, it was always going to be by the skin of their teeth. Everything would have had to go right. Everything did not go right. Injuries struck at all the wrong times, taking out key players like Chris Tanev, Bo Horvat, Sven Baertschi, and Brandon Sutter for extended stretches of time.

This does provide, however, an excellent opportunity to build towards the future. In some ways, the Canucks are fortunate that their fortunes have become so clear this season. Their dire situation offers Jim Benning and Trevor Linden no illusions: they are very clearly sellers at the upcoming trade deadline.

They should not, however, wait for that deadline to arrive.

One of the smartest things Benning did last year was to make his two key trades in the days leading up to the deadline, sending Alex Burrows to the Ottawa Senators for forward prospect Jonathan Dahlen and Jannik Hansen to the San Jose Sharks for Nikolay Goldobin.

He seemed to learn a lesson from the previous year, when he held out for better deals for Dan Hamhuis and Radim Vrbata and ended up with nothing to show for it, as potential trade partners went a different direction on deadline day. There seems to be a growing desire for teams to make trades in the week, or even month, leading up to the deadline, with fewer teams wanting to wait until the last minute.

For Benning and Linden, that means shopping their trade assets now, before the market gets flooded. Their two best trade assets right now are Erik Gudbranson and Thomas Vanek, who are both pending unrestricted free agents, but also be willing to listen to the rumoured offers for Michael Del Zotto and Ben Hutton, though the latter is young enough to still be part of their plans for the future.

Though it pains me to say this, the Canucks should also be open to offers for Chris Tanev, though negotiations should start with a blue-chip prospect and a first-round pick if Tanev is on the move.

At the very least, the Canucks need to trade Gudbranson and Vanek to acquire prospects and picks for the future. Canucks fans should keep their expectations low. Last season, Vanek only fetched AHL defenceman Dylan McIlrath and a third-round pick despite a strong season for Detroit. A comparable trade for Gudbranson would be the Luke Schenn deal from a couple years ago that brought back Jordan Weal and a third-round pick.

Even still, the addition of a couple mid-round picks will help the Canucks fill out a prospect pool that is missing some depth at centre and on defence.

The Las Vegas Golden Knights deserve a tap of the stick. They briefly hit first place in the entire NHL last week and are having the best first season for an expansion team in any sport. Their success is also making a lot of NHL GMs look bad, taking their castoffs and turning them into one of the best teams in the league.

I’m dropping the gloves with the NHL’s Department of Player Safety for dropping the ball on their decision to fine Dustin Brown last week. Brown crosschecked a vulnerable Justin Schultz from behind while Schultz was on his knees, sending him head first into the boards. It was a blatantly dirty play and it is unfathomable that it didn’t earn Brown a suspension.

17 - According to Sportsnet, there were 17 trades made on the day of last season’s trade deadline, though that includes two details made after midnight eastern time the night before. That’s not a lot of deals at the deadline and several of them were AHL-level trades that had no impact on NHL rosters.

78.6 - The Canucks are out of the playoff race, but have little hope of catching the Buffalo Sabres and Arizona Coyotes for last place in the NHL and better odds in the draft lottery. HockeyViz.com projects a final point total of 78.6 points, putting them in a battle with the Ottawa Senators, Edmonton Oilers, and Montreal Canadiens for third last.