The Prospector: Jack Rathbone is racking up points for Harvard without Adam Fox

The Canucks prospect defenceman is proving his freshman success was no fluke.
Nov 19, 2019 9:33 AM By: Daniel Wagner 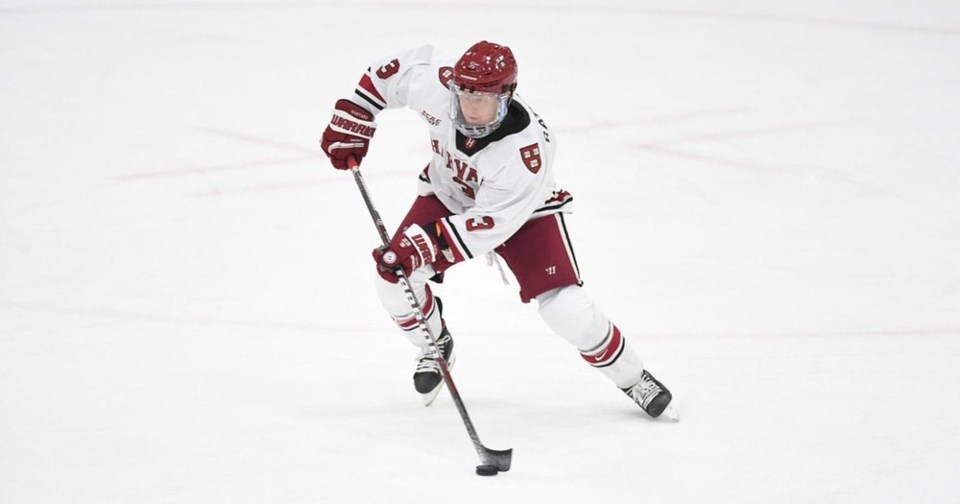 Harvard University is wrecking the ECAC conference to start the 2019-20 season and at the heart of their dominance sits Canucks prospect Jack Rathbone.

Through five games, the Crimson are undefeated, outscoring their opponents 27-7. That includes big wins over tough competition like Dartmouth and Quinnipiac. While they have yet to face their century-long rivals, the also undefeated Cornell, Harvard has quickly established themselves as one of the top teams in the conference.

Is it a concern that the Crimson have been out-shot 183 to 148 to start the season? Perhaps, but keep in mind they’ve taken multi-goal leads early on in most of their game; teams pushing for a comeback tend to take a lot more shots. You can’t take anything away from Harvard starting the season with five-straight wins for the first time since the 1988-89 season, which happens to be the only time the Crimson have ever won the NCAA championship in their long, storied history.

One of the players leading the way for Harvard is Jack Rathbone, the Canucks’ fourth-round pick from the 2017 draft. The smart, mobile offensive defenceman is off to a hot start in his sophomore season, showing that his strong freshman year wasn’t a fluke.

In his first year at Harvard, Rathbone had 22 points in 33 games and was named to the ECAC All-Rookie Team. That was good enough for third in the NCAA among freshmen defencemen in scoring, with much of those points coming at even-strength, an encouraging sign that he wasn’t dependent on power play production.

There was just one minor caveat: Rathbone was on a defence pairing with an absolute monster. Adam Fox was a beast for Harvard last season, leading the entire NCAA in points per game, with 48 points in 33 games. Yes, he outscored all the forwards too.

The 21-year-old Fox has made a seamless transition to the NHL with the New York Rangers, putting up 8 points in his first 18 games, good for third among rookie defencemen, while holding his own defensively.

Given that Fox more than doubled Rathbone’s point totals last season, it was understandable to wonder how Rathbone might perform without his playmaking partner. At least through his first five games, the answer appears to be “extremely well.”

Rathbone kicked off the season with two goals in his first game, then followed it up with three assists in his second game. He added another goal and an assist in his next three games, giving him 7 points in 5 games.

Beyond just the numbers, the way he’s getting his points is impressive. Defencemen often pick up points on good teams by happenstance: a good outlet pass (or even a chip up the boards) can turn into an assist if the puck lands on the stick of a talented teammate.

Rathbone, however, is primarily putting up points with excellent stretch passes, jumping up in the rush with his sublime skating, and his wicked wrist shot. Let’s take a look at a few of his points through Harvard’s first five games.

His deadly wrist shot was on full display on all three of his goals.

His first, the Crimson’s first goal of the season, saw Rathbone jump up in the rush, turning a 3-on-2 into a 4-on-2. John Farinacci spotted him, hit him with a great pass, and Rathbone wasted no time going bar down on hapless Dartmouth goaltender, Justin Ferguson.

His second goal of the game, which stood as the gamewinner, was even more impressive. While it may have looked like a power play, it was 5-on-5. Rathbone faked a slapshot at the point, then stepped around his man before firing a wristshot from the left faceoff circle top corner over Ferguson’s glove.

Those shots were absolute darts, flung with precision where a goaltender had no chance to stop them, but he showed in his second game of the season that he could make a fantastic pass as well.

Two of his three assists on the night were spectacular stretch passes to give his teammates breakaways.

The first assist was perfectly placed, just out of reach of the Princeton forward and right on the tape of Nick Abruzzese, who made no mistake with the breakaway opportunity.

His second stretch pass assist was even better, a gorgeous saucer pass to evade the Princeton forechecker that landed perfectly on the stick of Henry Bowlby, who went top corner on the breakaway.

He also added a secondary assist on the third Harvard goal, giving him points on all three goals in a 3-0 win.

The final clip shows Rathbone’s goal against Quinnipiac. Similar to his first goal, Rathbone joined the rush, turning a 3-on-3 into a 4-on-3. Some slick passing found Rathbone as the trailer, and he ripped a wrist shot past the Quinnipiac goaltender’s glove.

Rathbone is worth getting excited about, but that excitement should be tempered by the knowledge that it might be a long time before we see him in Vancouver. Because he delayed his freshman season in the NCAA by a year, he could stay all four years at Harvard to complete his degree, and not be available to the Canucks until the 2022-23 season.

Rathbone takes his education seriously and it would be understandable for him to focus on getting his degree. There is a way that he could become a free agent before 2022, as outlined by Jeremy Davis at CanucksArmy, but there’s little cause for concern just yet that Rathbone won’t sign with the Canucks. For now, it’s enough to enjoy another Canucks prospect showing fantastic potential.