There’s more pressure than ever on Nikolay Goldobin

The Canucks winger will have plenty of competition at training camp.
Sep 5, 2019 10:22 AM By: Daniel Wagner 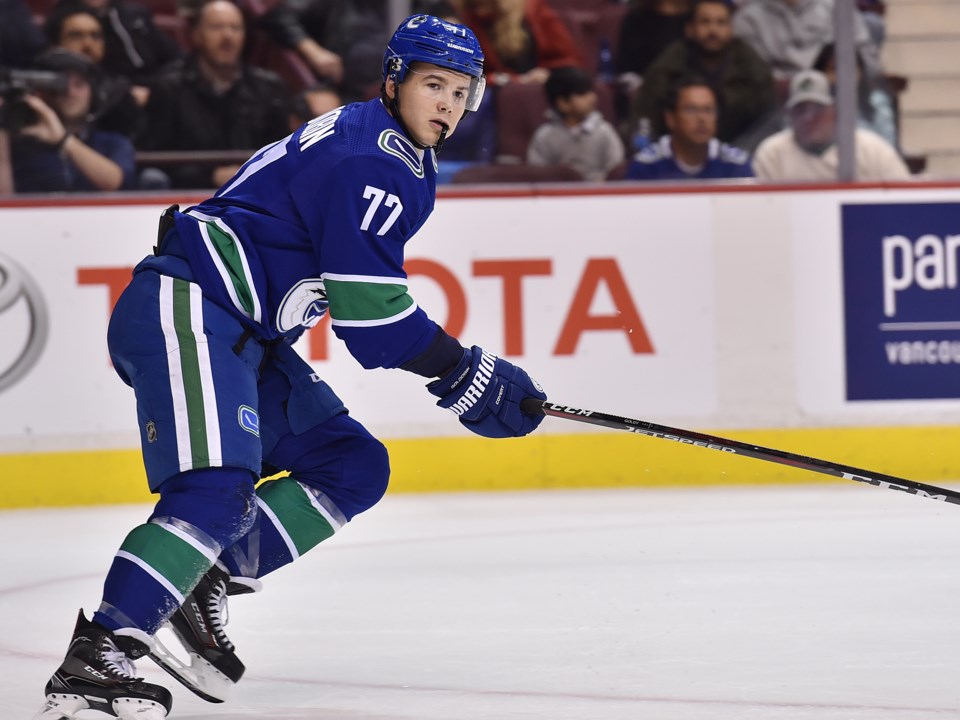 There’s a side of Nikolay Goldobin that fans rarely get to see: a loose, fun-loving side. If you follow him on Instagram, you might catch some glimpses of that side, but it’s only shown up in bits and pieces here in Vancouver.

For instance, before his media scrum at the end of the 2018-19 season, he ducked out of view as soon as he saw cameras, and re-emerged with his hair carefully re-arranged, smiling at the laughs that provoked. As soon as the cameras clicked off, with a cheeky grin he reached up a hand and messed up his hair again.

Goldobin knows he can’t be a big personality off the ice, at least not yet. In the hockey world, personality is a privilege for well-established NHL players, not those still trying to find a permanent spot in the lineup. Even NHL stars get excoriated for showing too much personality, such as PK Subban. Hockey culture, which emphasizes the team above all else, struggles with individuality. While other professional sports in North America have embraced their biggest personalities, hockey stifles them. If you’re a player on the bubble of a lineup, showing too much individual personality could unintentionally signal to coaches and management that you’re not a team player, even if those two concepts are entirely unrelated.

In other words, Goldobin likely doesn’t want to make waves off the ice because he has yet to establish himself on the ice.

Last season, Goldobin got a golden opportunity to prove himself, starting the season on the wing with superstar rookie Elias Pettersson. He didn’t look out of place, as his creative playmaking fit right in with Petterson’s style.

“We’re pretty good offensive guys,” said Pettersson about playing with Goldobin and Brock Boeser. “We think hockey the same, all three of us.”

There was just one issue: Goldobin wasn’t putting up points. Some of that was bad luck and some was a lack of finish, but it certainly seemed like he should score more while playing with Pettersson. Combine that with his defensive struggles away from the puck and it was understandable that he got plucked off Pettersson’s line partway through the season.

Away from Pettersson, Goldobin struggled even more to score, leaving him in a precarious position.

“Not every young player is going to become a full-time NHLer,” said Canucks head coach Travis Green about Goldobin at the end of last season. “The onus is on us to continue to work with him and develop him, then the onus is going to go back to the player. I’d like to see Goldy make some changes this summer in how he trains and what he does over the summer to make himself come in a better hockey player.”

Goldobin has put in the work — like his personality, that’s also evident from his Instagram — but the opportunities have gotten slimmer for Goldobin since the end of last season.

The Canucks have added two top-six wingers via trade and free agency — J.T. Miller and Micheal Ferland — to go with the wingers they added last season, Tanner Pearson and Josh Leivo. While Miller and Ferland may not boast the same creative playmaking that is a hallmark of Goldobin’s game, they bring other assets to the table, like getting to the net with more consistency and proven point production.

Sven Baertschi is also returning to full health after concussions caused him to miss most of last season and eventually Antoine Roussel will return after recovering from knee surgery. There’s also Jake Virtanen looking to improve on his 15 goals last season.

That doesn’t leave much room for Goldobin to earn an offensive role and he hasn’t been good enough defensively for Green to trust him in a checking role. So, where does that leave him?

For the first time, Goldobin will be waiver eligible, which means if he gets sent down to the AHL, he’ll have to clear waivers first. Will another team take a chance on the skilled Russian winger if he gets cut in training camp? Will the Canucks look to avoid that possibility and keep him on the roster, even if he’s in the press box to start the season? Eventually, injuries could give him another shot at playing on the first or second line.

Goldobin has a lot to prove, more than any other player at this year’s training camp, and this could be a make or break season. If all goes well, he’ll have plenty of opportunities to let his personality shine through in the future.

A tap of the stick to Thomas Drance, who returned from working with the Florida Panthers to join The Athletic Vancouver as their Canucks beat reporter. Drance was a contributor to Pass it to Bulis in its early years and is a superb hockey writer; Vancouver is lucky to have him.

I’m dropping the gloves with Canucks prospect camp, which won’t feature any undrafted invitees. While the focus on drafted prospects makes some sense, it makes for a sparsely-attended camp and could be a missed opportunity to get a closer look at potential free agents.

19 - Canucks prospect camp kicks off on September 7th, with 19 players expected to attend. The biggest name on the list is Quinn Hughes, a virtual lock for the Canucks’ opening night lineup.

7.15 - The Arizona Coyotes re-signed Clayton Keller for eight years at $7.15 million per year on Wednesday, which could be used as a benchmark for Brock Boeser's contract. Keller and Brock Boeser have a similar number of points through their first two seasons, though Boeser's points have come in fewer games, while Keller is a year younger.