These are the three types of proportional representation B.C. is considering 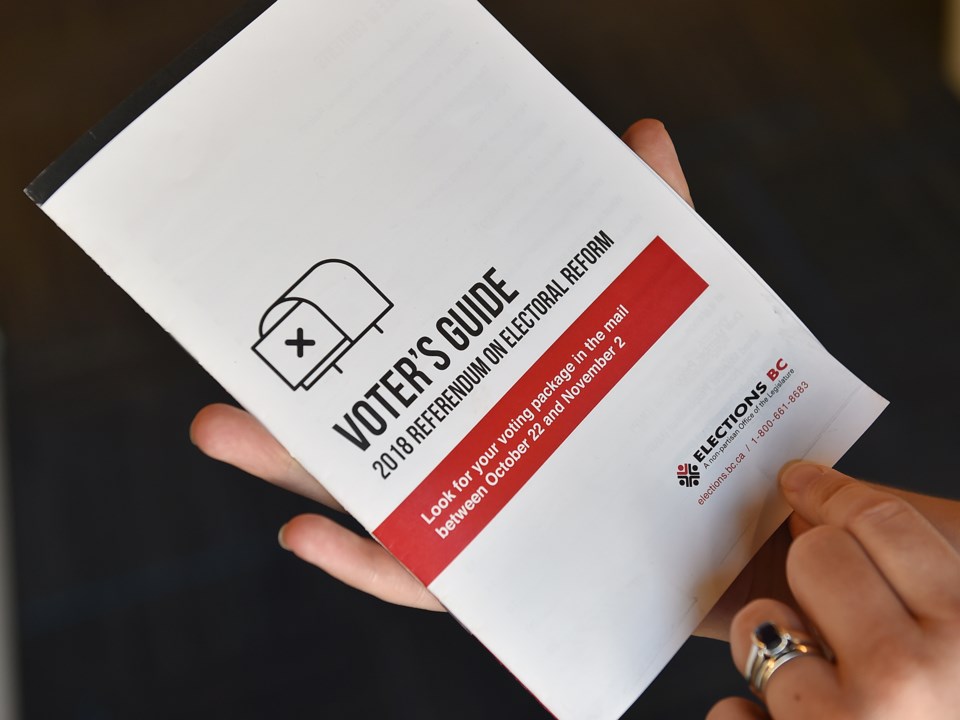 Just when you thought we were done with voting, the ballots in B.C.’s referendum on electoral reform will start going out to households across the province this week. But what exactly are we being asked to vote on?

So, what is proportional representation and how does it work? The Courier spoke to Richard Johnston, a political science professor at the University of British Columbia.

“The basic idea is that the entitlement of a party to a number of seats in the parliament or legislature should be as closely proportional to its share of the popular vote as arithmetically possible,” he said. “That’s it.”

The principal is simple. It’s in the execution where things can get complicated.

We should also note this isn’t the first time B.C. voters have been asked about switching from the current first-past-the-post electoral system to a form of proportional representation — referendums in 2005 and 2009 were both defeated.

MMP was first invented for use in Germany in 1949, but it is also the system currently used in New Zealand, Scotland and Wales.

The system divides MLAs into two tiers — local and regional. Local MLAs would be elected as they are now. Voters cast a ballot for the candidate they would like to see represent the constituency, and the candidate with the most votes wins that seat. However, residents then cast a second vote for a regional representative. It’s the second vote that determines what the overall share of seats each party is entitled to.

Any seats that are won at the local level are awarded and subtracted from the overall total. The regional seats are then allocated based on each party’s percentage of that vote.

He added, “It’s an attempt to have local representation mesh with an overall proportional result.”

This system was designed in 2013 by Sean Graham, a civil servant in Alberta. It’s not in use anywhere but was one of several electoral systems proposed in a 2016 plebiscite in PEI.

“From a representational point of view, it’s kind of interesting, kind of smart, but it’s very hard to describe,” Johnston said.

With DMP, almost every riding would elect two representatives. Most of the province’s electoral ridings would be amalgamated with a neighbouring constituency to create larger two-member districts. The largest rural districts would likely remain unchanged — parties would run a single candidate and the candidate with the most votes would win the seat.

“At this point, half the seats in the house are assigned,” Johnston said. “Then a counting mechanism is set in [motion] to assign the other half.”

The second seats are then allocated to ensure each party’s share of seats is roughly the same as its share of the popular vote province-wide, needing at least five per cent of the vote to get any second seats.

Johnston said this system “attempts to address straight up what is in some ways a big rhetorical problem for proportional representation in a place like British Columbia, which is that B.C. is vast and mostly empty.”

“They’re trying to preserve some semblance of the existing constituency makeup of the low-density part of the province,” he said.

“The low-density parts of the province, basically the interior and the north, you would essentially have MMP — individual constituencies and then an upper tier of [representatives] selected by basically the same system as described in MMP,” Johnston said.

In the rest of the province, where there are a lot of people but not a lot of turf, ridings would be bundled into larger, multi-member districts and MLAs would be elected using STV.

STV was the electoral method proposed by the B.C. Citizens Assembly and was included in the 2005 and 2009 referendums. It uses a preferential ballot where voters rank their preferred candidates on the ballot.

With STV, the counting of the ballots is more complicated, Johnston said, but it is already in use in Ireland, the Australian senate and in Malta. It usually requires several rounds of counting.

Voting packages are set start arriving in mailboxes across the province between Oct. 22 and Nov. 2. Completed ballots must be returned to Elections BC by 4:30 p.m. on Nov. 30.

Anyone who does not receive a package by Nov. 2 can request one by calling Elections BC at 1-800-661-8683 or online at elections.bc.ca/ovr. The deadline to request a voting package is Nov. 23.

For more information about the referendum, visit elections.bc.ca/referendum.