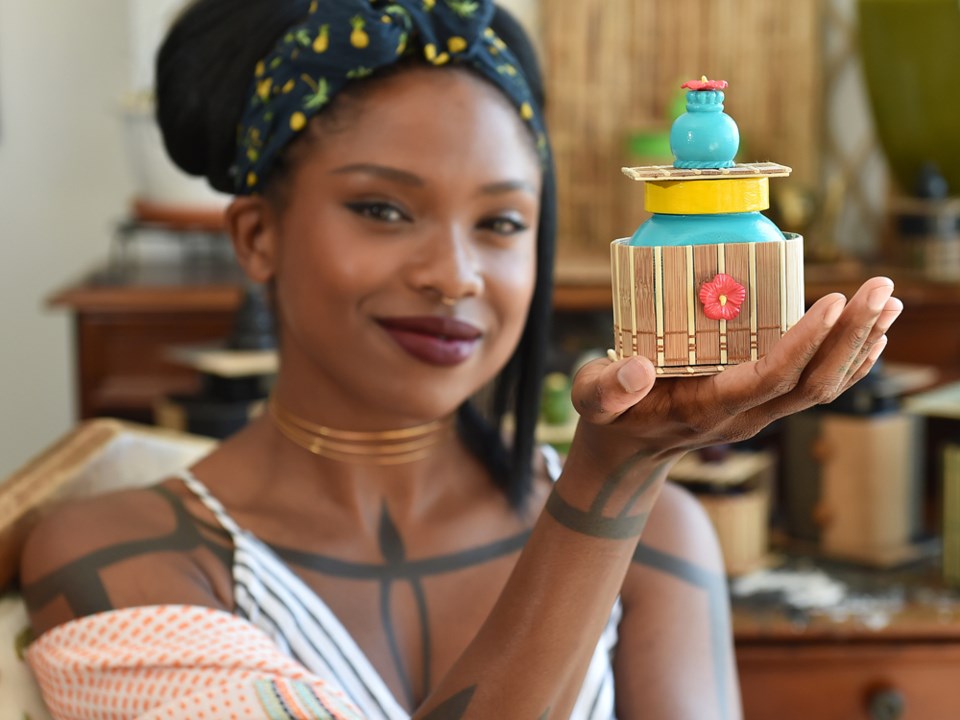 It was in the basement of a funeral home in rural Nova Scotia that Shay Lhea reconciled her feelings around the great unknown.

Her grandmother laid before her, moments away from being cremated. Lhea’s relatives were reeling and couldn’t be in the room with the recently deceased woman for more than a few minutes.

“I stayed down there for 20 minutes or longer. I studied her and I touched her,” Lhea said. “It started there and I remember this intense feeling within me to want to find ways to portray death in a really, really beautiful light.”

That transformative moment happened eight years ago and was the beginning of the build-up towards Lhea’s recently launched business called Sacred Shelter Urns.

Made specifically for pets, the urns range in size between the equivalent of a teacup or Mason jar and are wrapped in bamboo. Each one is hand painted and features varying designs and bells and whistles.

Making the urns — or “vessels” as Lhea calls them — ornate, colourful and decorative is what she banks on being her primary selling point. Adding liveliness to the urn takes away the stigma and sting of death.

“It’s not just creating the urns and selling them to people,” Lhea said. “It’s about wanting to change the way that people think about what happens behind your person or your pet passing away and the feelings that we have surrounding that.”

The death of Lhea’s grandmother was the impetus behind her change in thinking, but it’s the impending departure of her 16-year-old dog Kahvey that compelled Lhea into action.

Lhea has squared the pooch’s deteriorating health — he suffers from Cushing’s Disease — but won’t accept his final resting place to be blasé. It’s the same frustrating scenario Lhea’s family went through when saying goodbye to their grandmother.

Having only launched the business two months ago, Lhea is curious to see who her demographic will be. Many of Lhea’s friends have elderly pets and are of the belief that death can only be terrible. It’s within that sphere that Lhea wants to carve a niche — to get people thinking about death long before it happens, and an urn befitting of their dearly departed.

“I want people to find something that they can bond with, a vessel, long before their pet passes away,” Lhea said. “I want them to be prepared that absolutely your pet is going to pass way before you die. That’s just a part of getting a pet and everybody knows it.”

Lhea’s urns range in price between $60 and $300 are available online at sacredshelterurns.com.