Of Thomas Haass supremacy as a chocolate and pastry maker, this much is known: not only is he one of the best in Vancouver, he would be among the best in any city around the world.
Feb 12, 2014 9:00 PM By: Vancouver Courier Staff 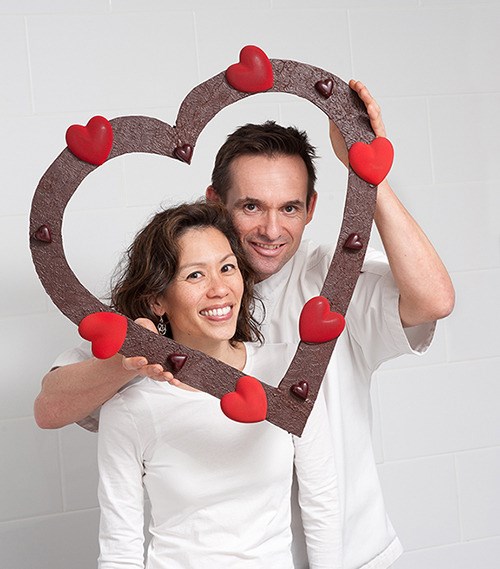 Of Thomas Haass supremacy as a chocolate and pastry maker, this much is known: not only is he one of the best in Vancouver, he would be among the best in any city around the world.

Put him back in the Black Forest, where he was born, and hed be respected by people who have honed the craft for generations. Put him back in New York, where he was executive pastry chef at Daniel Bouluds three-star Michelin restaurant, and hed be back on all the talk shows as the great, all-knowing guru as quickly as he could whip up his famous steamed chocolate soufflé.

But Haass reputation as the go-to emotional confidante among his staff?

I have a middle name and it doesnt come from me, he says. My staff call me Thomas Dr. Phil Haas.

Just the other week, when one of his staff members was going through a painful break-up, he invited her to move in with the Haas family Haas, wife Lisa and children Taylor and Alessa until her world stopped spinning.

And this brings up another surprising discovery. I am the woman in the relationship, he says with a smile when describing his 17-year marriage. Well be laying in bed and Ill hold Lisas hand and say, I think we have to talk

There is much about Thomas Haas that defies expectations. In a celebrity-driven world, he eschews the glamour, preferring to spend his free time with his family. He has earned the right to be supremely self-confident and yet hes always wondering how he can be better. And there must be something in the chocolate that makes him so open to exploring his feelings and the feelings of others.

If ever I blow my own horn, I say, Lisa, you have to hurt me. Its so not charming.

In 1918, Haas great-grandfather opened the familys first bakery in Aichhalden, Germany and it was always assumed that Haas would one day take over the family business. But then, in 1995, he accepted the job as executive pastry chef at the Four Seasons hotel in Vancouver where the assistant manager in the front office was a young woman named Lisa.

Lisas grandfather had left China and settled in Jamaica as part of an immigration program intended to provide labour in the sugar cane fields. He eventually made enough money to pay for his wife to join him and thats where Lisa grew up until the family moved to Toronto when she was eight.

Their friendship blossomed long before the romance. When you develop a friendship first there are no walls. You talk freely about anything under the sun, Lisa says. She got to know everything about Thomas so that by the time they discovered that additional spark, the past was already in the past. There were no skeletons in the closet that pop out.

Their marriage is a case study in opposites attracting. He can do the Grouse Grind in just over 30 minutes. Shed prefer to take the gondola to the top. He describes her as easy going and relaxed. She describes him as forever on zoom.

Their son Taylor was still a baby when Thomas got a call from Daniel Boulud asking him to visit him in New York, where Boulud was in the midst of opening Daniel at Park Avenue and 65th Street.

It happened so quickly, Lisa remembers. The Haases had always said New York was a fun place to visit but theyd never want to live there. Nonetheless, Haas Fed-exed some recipes to Boulud and flew to New York so Boulud could taste the results. Thomas calls me and says, Were moving to New York Lisa remembers. Never say never.

Those early years were a whirlwind. There was the phenomenal success of the restaurant, but also of Haas, who was a frequent guest on television shows such as Martha Stewart Living. Both Chocolatier magazine and Pastry Art and Design magazine placed him in the top 10 in the United States and his star was in ascendancy, heading towards stratospheric.

Professionally, Thomas grew amazingly in New York and learned so much from Daniel, Lisa says. It was a life they loved but didnt think was compatible with their parenting ideals. From birth to age five is the most flourishing time in a childs development and both of them wanted to be part of it. They couldnt see raising children daughter Alessa was born in 2000 in New York and so they made what was both a very tough and very easy decision to move back to Vancouver.

Im happy to lose out on [professional] success because its a different definition of happiness.

They started their business she runs the office in the most unpretentious location: behind the auto mall in North Vancouver. Its the type of place youd never drive by because theres no by there. And yet the retail space and café in the front are always packed, with Saturday morning line-ups for out-of-the-oven croissants not unheard of, just like at the second location on West Broadway.

Most of the staff has no formal training because he wants to imbue them with his values. If everyone can love to come to work every day and dont let the objectives slip, longevity is built in.

And thats why the Dr. Phil part of his personality knows when a staff member is in turmoil and offers more than platitudes. He hires a bus to take them all to Seattle to discover whats happening in the food scene there. They close up early to do the Grouse Grind every week. And he lets them know he has their back when the pressures of success start to eat away at that quest for balance.

You only have one life, he says, and every day is precious.

If theres one question in life its who you are and what makes you happy. If you have a positive attitude you will get closer to the answer. What makes me happy? Harmony and honesty and genuine success in the big picture.

Vulnerability and transparency are a big thing. Its important that there are times when I make myself vulnerable because it breaks barriers.

Being right is not what I want. Its being better.

Life is a lot about heavily embracing compromise, sacrifice and tolerance. If you just accept them, theyre a burden.

I want to grow old with an amazing feeling of not having regrets.

I want the business to be better, not bigger. Better to the staff, better to the environment, better to customers. I could have 30 stores but I know I wouldnt enjoy not knowing everyone by name.

You need to build a deeper culture [at work.] Its hard work and if people dont buy in, its only shallow and will collapse.

I think Im never the best. What I know is that were trying our best to our ability.