Tin foil wrapped around BC Hydro meter to prevent pain 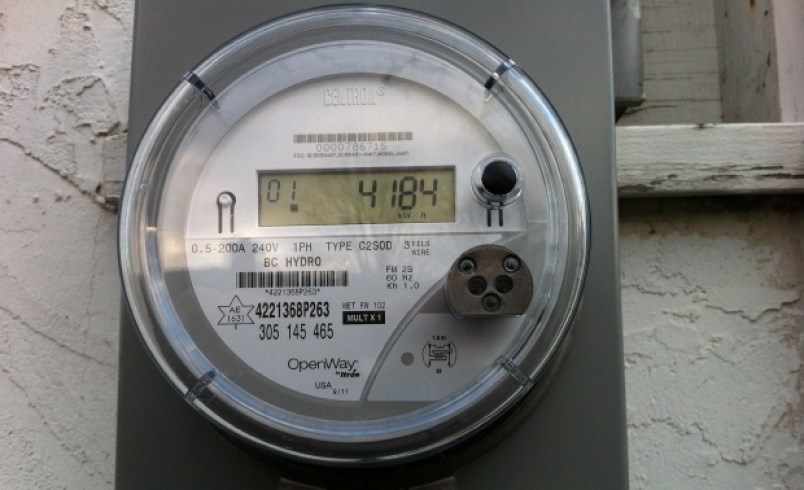 A B.C. woman can’t prove her smart electrical meter is causing “many, very serious, symptoms she describes” and would have a problem proving BC Hydro discriminating against her by installing one at her house, B.C.’s Human Rights Tribunal has ruled.

Mary Roadhouse said she has electromagnetic sensitivity triggered by radiation emitted by the smart meter BC Hydro installed at her residence. She said the requirement to have such a meter discriminated against her on the basis of a disability.

BC Hydro argued the meter has its radio turned off and does not transmit, emit, or receive radio waves resulting in a “statistically insignificant level of radiation,” and that there is no evidence is triggers Roadhouse’s symptoms.

The meters came into widespread usage in B.C. in 2013 after a law was passed requiring their use to improve BC Hydro’s ability to accurately measure and manage electricity consumption.

Users were allowed to have legacy meters until they expired or replacement stock ran out.

In August 2018, Roadhouse’s meter expired. She was told she could have a meter with the transmitter off, the Aug. 22 decision from Devyn Cousineau said.

Roadhouse posted a doctor’s note at the meter site saying she is “adversely affected by electromagnetic radiation with symptoms as plugged left ear, stabbing pains right side of head, eye irritation, facial burning, jaw pains, muscle aches, heart palpitations and insomnia. She states that when she goes to the interior off the grid she does not experience these symptoms.”

The new meter was installed without her consent next to a bedroom wall.

She said as soon as it was installed “my legs felt heavy like lead, my heart pounded + my head was swimming. I was affected from the top of my head to the soles of my feet.”

She later wrapped the meter in aluminum foil but says that the symptoms persisted. She says that she has not been able to sleep since the radio‐off meter was installed.

She filed the human rights complaint in November 2018.

BC Hydro argued the tribunal had adjudicated other similar complaints and dismissed them.

“In each case, the tribunal has dismissed the complaints on the basis that there was no evidence capable of proving a connection between the wireless technology and the symptoms which the complainants were suffering,” the decision said.

The utility did not dispute the fact that Roadhouse may have a disability. What is said would cause her claim to fail was an inability to link the disability to the meter.

The decision quoted a previous decision, stating: “there is currently no scientific basis to conclude there is a connection between [electromagnetic] exposure and causality, exacerbation or simply reawakening of dormant [electrohypersensitivity] symptoms.”

“Given the mainstream consensus that radiation emitted by Smart Meters with their radio-frequency function turned on does not adversely impact human health, Ms. Roadhouse will require expert evidence to establish that her Radio‐Off Meter is the source of her suffering,” Cousineau said. “The notes written by Ms. Roadhouse’s doctor are insufficient for this purpose.”

Cousineau also dismissed a so-called expert report on electro hypersensitivity from a man with a “Bachelor of Science, an amateur radio license, and an interest in studying and investigating problems related to radiofrequency radiation.”

“I have explained that a person’s personal enthusiasm for a topic does not qualify them as an expert,” Cousineau said.