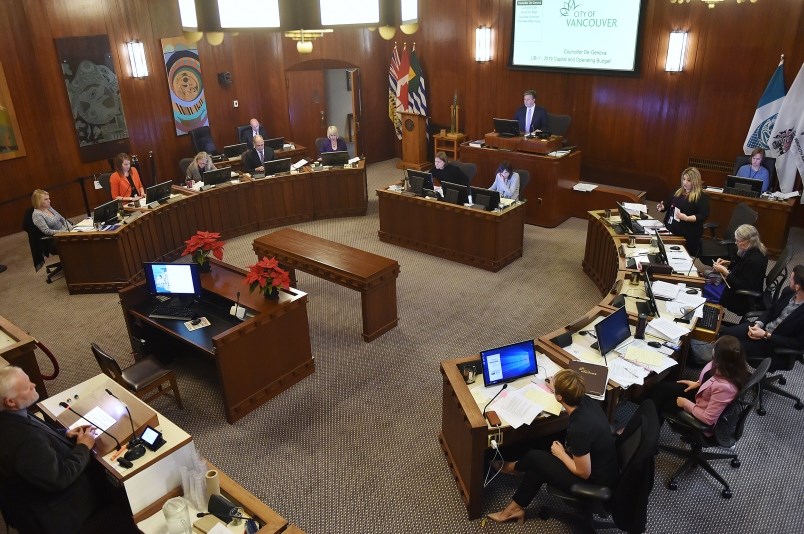 Money laundering, free transit and climate change are some of the topics on the agenda this week at city hall as Mayor Kennedy Stewart and city councillors return from a holiday break to begin a new year of business.

All three topics are a result of motions to be introduced by councillors when they meet Tuesday and Wednesday. Residents have registered to speak to each of the topics, so debate and discussion is likely to begin Wednesday.

Here’s a look, in brief, at the motions, beginning with Coun. Melissa De Genova’s motion to “deter and prevent money laundering and the business of organized crime in the City of Vancouver.”

De Genova wants city staff to review the powers available in the Vancouver Charter that would require “audited financial statements from businesses, individuals, corporations and companies when paying specific taxes, business licensing or any type of fee charged by the City of Vancouver in areas of business or property ownerships that are more likely to attract money laundering and/or organized crime.”

De Genova doesn’t point specifically to a Vancouver business or property that would attract money laundering or organized crime, but it’s widely known that casinos—of which they are two in Vancouver—are among such businesses. The B.C. government is also examining horse racing and the luxury car market.

But she does point to the city’s empty homes tax in her rationale for her motion.

“Currently, there is no system to confirm if the money collected by the city is directly or indirectly linked to money laundering,” she writes in her motion.

As of Monday, three people had registered to speak to De Genova’s motion.

Coun. Jean Swanson’s motion requests the City of Vancouver endorse the #allonboard campaign launched in the region to have the provincial government develop a plan to provide free public transit for people 18 and under.

Swanson also wants reduced pricing for low-income people and an end to ticketing minors and adults for fare evasion.

“Those living below the poverty line have brought forward that they cannot afford to pay the $173 fines received individually, or the resulting accrued ‘TransLink debt’ from many unpaid fines,” Swanson writes in her motion.

According to #allonboard’s website, the campaign consists of an alliance of coalitions, organizations, community groups, advocates, unions and “passionate communities and citizens from municipalities across Metro Vancouver coming together to ensure our communities can get on board.

As of Monday, eight people had registered to speak to Swanson’s motion.

Coun. Christine Boyle wants the city to get tougher on fighting climate change.

She wants city staff to report back to council within 90 days on opportunities to accelerate timelines on “existing actions” under the city’s renewable city action plan and climate adaptation strategy and “add new actions” to help the city achieve its targets and reduce greenhouse gas emissions.

The good news, as Boyle points out in her motion, is that Vancouver’s carbon pollution levels are seven per cent below 2007 levels, which represents an average reduction of less than one per cent per year over the past decade.

The bad news is the city will need to see an annual reduction of more than three per cent to meet its 2030 targets.

“The world is currently on track for more than three degrees Celsius of warming based on policies currently in place, and those policies will need to be strengthened significantly to limit warming to 1.5 degrees Celsius,” Boyle writes  in her motion. “Vancouver B.C., and Canada are no exceptions.”

As of Monday, 12 people had registered to speak to Boyle’s motion.

Tuesday’s meeting begins at 9:30 a.m. It can be viewed via a livestream on the city’s website.