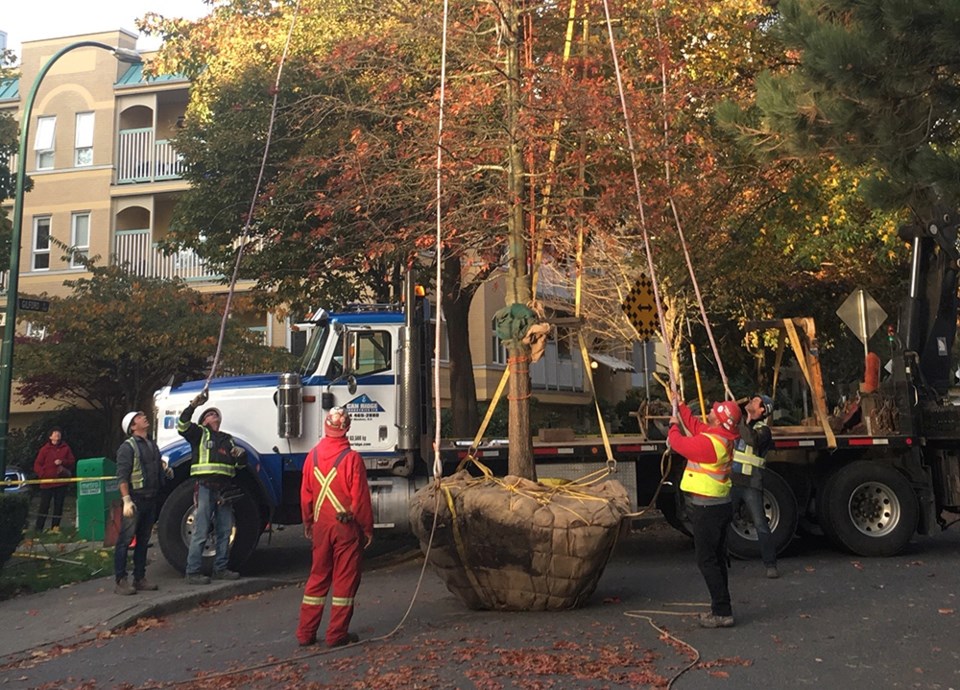 This week, a crane lifted a pin oak tree 19 storeys into the air to install it atop the Eugenia Place building on Beach Avenue in Vancouver’s West End.

The entire project reportedly cost the strata more than $500,000.

The tree replaces one that was planted when the building was erected in the late 1980s.

The original tree was in poor shape, so it was removed to make way for a replacement.

Last spring, the Courier talked to Richard Henriquez, a founding partner with Henriquez Partners Architects, who was involved in the Eugenia’s design and who selected the original tree.

The Eugenia was named after the mother of the developer — Caleb Chan (and his brother Tom), according to Henriquez. He said the penthouse was built for their parents but they never actually moved into it.

When the tree was installed almost 30 years ago, Henriquez said the idea was to create unique landscaping for the luxury penthouse while referencing the site’s forested past.

“We were doing this luxury high-rise apartment and I thought that if the penthouse could feel like a villa on a cliff, it would be very cool because there’s nothing in front other than the ocean. The idea was to have this tree with a piece of grass that you had to mow with a hand mower, of course, and that would give you the feeling of being in a villa on a cliff,” he said.

“It’s also the height that the original forest was and I was very interested in revealing the history of the site in the project.”

Henriquez recalls paying about $2,000 for the original tree, which was 15 years old at the time. He travelled to a Langley nursery to pick it up after it was brought to Canada from Oregon.

Henriquez remembers installation costs being about $100,000 — which included a massive amount of soil and a planter that was 30 feet in diameter.

The tree was chosen because it was hardy and good in wind, but it was also tied down with guide wires for the first few years so the roots would establish themselves.

It’s just one of several design elements incorporated into the building as a nod to the past, Henriquez said. “So when you looked at the site you saw these layers and realized that we live in a historical continuum. I think knowing that makes us a little more comfortable with our own mortality.”

The tree’s lifespan, however, turned out to be shorter than expected.

Enquiries from the strata council, dating back to 2009, indicated the tree was not healthy — a fact city staff confirmed through a site inspection, according to information the City of Vancouver dug up for the Courier last June. At the time, the planning department advised the strata a replacement tree would be required and the strata committed to that plan. (Staff who were involved in the process in the 1980s are no longer with the city.)

The individual tree was not specifically addressed in the original development permit, which was issued in 1998, but there is reference throughout the file about the landscaped rooftop garden. It states that, in addition to providing an added amenity for tenants, it would respond to and recall the history of the site.

Trees, plants and shrubs are shown on the approved landscape roof plan, along with the fact there would be a tree atop the building with a potential height of six to seven feet. As a standard condition of approval on development permits where landscaping is proposed, the permit states: “All landscaping and treatment of the open portions of the site shall be completed in accordance with the approved drawings within six months of the date of issuance of any required occupancy permit and thereafter permanently maintained.”

The condition gives the director of planning the ability to ensure the agreed to landscaping is provided, or in instance where it is omitted or changed, allow for consideration to vary what was approved subject to staff review.

While rooftop trees are not common in Vancouver, according to the city, staff do see them at the request of applicants. However, they can be challenging due to trees outgrowing their containment, as well as soil and membrane issues.

Henriquez, meanwhile, said he didn’t anticipate the original tree atop Eugenia Place would have to be replaced,. He was surprised when he learned it would be, but he was happy to hear it.

“The whole idea of the building was built [and] designed around the tree so I’d say, yeah, it’s a good idea to put it back,” he said.