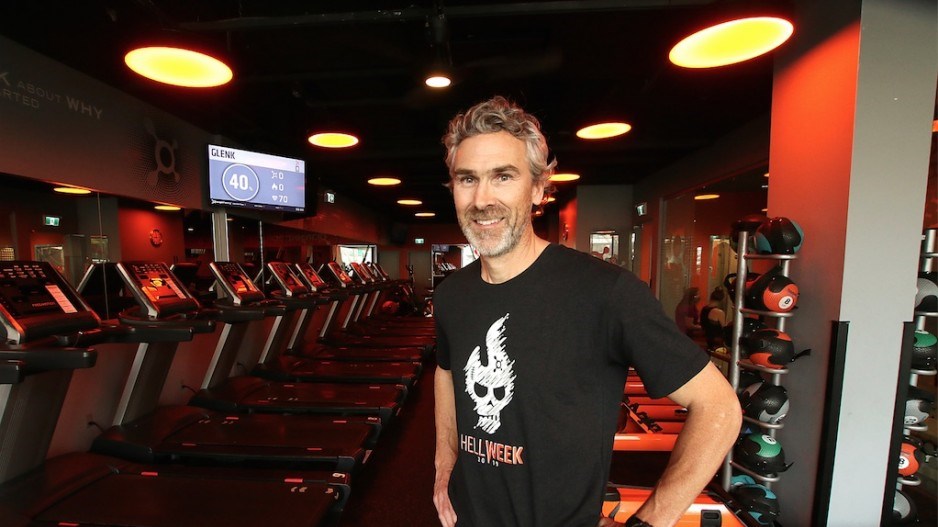 Trevor Linden runs on a treadmill at his Orangetheory Fitness gym on Davie Street. It is a Tuesday mid-afternoon, and he is one of 19 people in the fitness class, listening to upbeat music by British rapper Idris Elba and alternating between exercise stations that also include rowing machines, stationary bikes and floor-exercise spaces.

All participants have heartbeat monitors affixed to their biceps, and all can look at a screen while working out that shows everyone’s heart-rate data in individual squares. They are later sent emails so they can see more data on how well they performed.

“We’re opening our 10th club in Abbotsford early in 2020,” said the former Vancouver Canucks star and executive turned fitness entrepreneur. “Before you know it, anywhere you live in the Lower Mainland, you’ll have an Orangetheory Fitness nearby.”

The duo is also active in the fitness sector outside of Orangetheory Fitness. Their Club 16 Trevor Linden Fitness venture has 10 locations for men and women, plus four separate women-only She’s Fit! gyms. They plan to open an 11th Club 16 Trevor Linden Fitness gym in Langley later this month. An existing Langley She’s Fit! gym will move to be within it.

All the other Club 16 Trevor Linden Fitness facilities already have She’s Fit! sections, which has helped give women a 70 per cent share of the chain’s overall membership.

While most people know Linden for Club 16 gyms because they bear his name, he has more ownership clout with his Orangetheory Fitness franchises.

Linden and Lawson sold a 60 per cent stake in Club 16 Trevor Linden Fitness to Founders Advantage Capital for $20 million in December 2016.

Club 16 Trevor Linden Fitness increased annual revenue more than eight per cent to $26.5 million in 2018, when it generated more than $2 million in profit, according to Founders Advantage Capital corporate filings.

Despite owning a 40 per cent stake in Trevor Linden Fitness, Linden and Lawson receive 70 per cent of the venture’s proceeds because of how the contract was structured when they sold the company.

While Linden declined to provide specifics on membership numbers, he said Club 16 Trevor Linden Fitness has more members than does Orangetheory Fitness in the Lower Mainland.

The result is that Orangetheory Fitness is not as lucrative, but Linden said “it has the potential to be [as profitable]” as Club 16 Trevor Linden Fitness.

In an attempt to realize that potential, Linden and Lawson plan to operate as many as 15 Orangetheory Fitness franchises by the end of 2020.

Linden told Business in Vancouver that he was comfortable selling a majority stake in the gym business that bears his name and likeness because he remains active running it. Founders Advantage Capital executives made clear to him early in acquisition negotiations that they were interested in buying a majority stake in the company only if Linden and Lawson continued to run the day-to-day business, he said.

That situation differs from the one that former National Basketball Association star Steve Nash found himself in, when he had a falling-out with business partners involved in the Steve Nash Fitness World business. Nash launched a lawsuit in October 2016, aiming to remove his name from the enterprise.

That lawsuit, which Nash filed two months before Linden’s transaction with Founders Advantage Capital closed, dragged on in the courts until mid-2018, with Nash unable to get his name removed from the venture.

Nash, who was not available for an interview, finally reached an agreement with Steve Nash Fitness World earlier this year, and in September he joined the company’s board of directors.

Nash, unlike Linden, had never been an active partner in his gym business.

Linden’s track to becoming a gym and fitness entrepreneur stemmed from a mutual friend introducing him to Lawson in 2010. Linden had dabbled with small real estate development projects after he retired from the Vancouver Canucks in 2008.

He entertained plenty of pitches from business people keen to have him as their partner. Each time until Lawson, Linden would reflect on the opportunity and then send the potential partner a rejection note.

Linden said that he sensed that Lawson was a good match. Lawson was operating a small chain of women-only fitness centres, and Linden and Lawson’s conversations focused on launching what Linden called “coed” facilities.

“From that first meeting, we spent probably six months together as an entry into a partnership,” Linden said.

Linden had also come to the realization that he was passionate about fitness, and that to be a successful entrepreneur it would help if he were in a sector where he found inspiration.

The two opened their first Club 16 Trevor Linden Fitness gym in Coquitlam in 2011 and steadily expanded the chain.

“I didn’t want to just lend my name,” Linden told BIV. “I wanted to be active. I wanted to be part of it. Obviously Chuck was very supportive.”

As with many successful business partnerships, the two carved out their roles.

“I make no bones about the fact that Chuck is driving the bus when it comes to this business,” Linden said.

“He’s got two hands on the wheel with his expertise. So he does a lot of the heavy lifting. Certainly with our COO, Radha Johal, they drive the day-to-day.”

Linden credited Lawson for his work ethic and business experience.

“I bring the brand and recognition,” Linden said.

“Certainly at a lot of our public events, I’m kind of the face of the operation, which I am proud of, and I enjoy connecting with people who are interested in fitness. That part of it has been very fun.”