Former Canucks president and star centre has so far been absent from celebrations to mark team’s 50th year in operation
Oct 25, 2019 1:35 PM By: Glen Korstrom 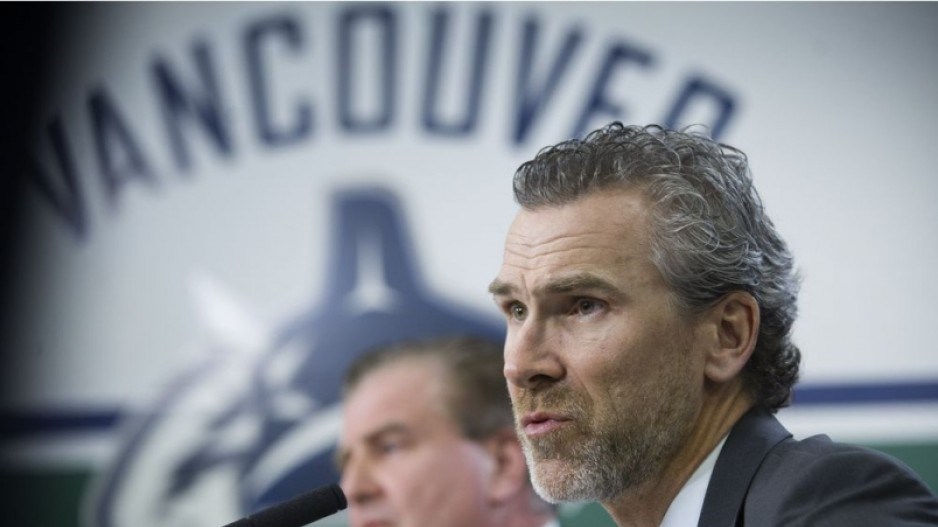 Trevor Linden was president of hockey operations with the team until a controversial exit. File photo Dan Toulgoet

Former Vancouver Canucks president of hockey operations and star player Trevor Linden confirmed to Business in Vancouver in an exclusive interview October 24 that he will take part in celebrations on Feb. 12, when the team plans to retire Daniel Sedin’s jersey No. 22 and brother Henrik Sedin’s jersey No. 33 before a game against the Chicago Blackhawks.

Linden has so far been absent from team’s celebrations to mark its 50th year in operation. This season would have been the team’s 50th season had there not been a lock-out during the 2004-2005 season. The franchise's first National Hockey League game was in October 1970.

Linden's words act to dispel speculation that there is a deep rift between himself and the team, one that has festered following Canucks owner Francesco Aquilini abruptly announcing on Twitter on July 25, 2018, that Linden had “stepped down” and would be “pursuing other opportunities.”

Aquilini then clarified in a tweet later that day that he “misspoke” when he said that Linden was stepping down, and, Aquilini said, “it’s been pointed out to me that that made it sound like he’s a quitter. He’s never been a quitter, on or off the ice. We parted ways amicably and I wish him only the best.”

Linden was not available to media that day, and the Canucks released what it called a “message from Trevor Linden” that included him saying that it was a “difficult” day.

Speculation ensued that Linden was fired.

So when Linden was absent from the team’s season-opening game at Rogers Arena on Oct. 9, when past stars such as Stan Smyl, Todd Bertuzzi, Kirk McLean, Orland Kurtenbach, Dennis Kearns and others skated on the ice to salute fans, rumours swirled that the relationship between Linden and the Canucks ownership was on the rocks.

Not so, according to Linden.

“I was away,” he told BIV. “I was traveling the next day on a personal trip, so the night of the home opener I was wanting to spend the night with my son, who is two, to put him to bed.”

After 22 years of marriage, Linden and wife Cristina Giusti had their first son, Roman Mattias Linden, in July 2017.

“It’s the best job I’ve ever had,” Linden said of being a father.

“The best part is that it’s been fun being at my stage of life and having a little guy. It allows me a lot of time to spend with him.”

Linden, who turns 50 years old in April, said that the Canucks’ vice-president of communications, Chris Brumwell, reached out to him to invite him to that season opener and to other festivities taking place this year.

Will he take part in any?

“Yes, definitely,” Linden said. “Obviously on Daniel and Henrik’s night, I’d like to be a part of that.”

Much of Linden’s time is also spent on two separate gym businesses that he owns with partner Chuck Lawson. The two own franchise rights for the Lower Mainland from Florida-based fitness brand Orangetheory Fitness. They also own, along with others, a 40 per cent stake in Club 16 Trevor Linden Fitness.

Linden and Lawson plan to open a 10th location in Abbotsford within the next couple months.

“I wouldn’t say it’s full-time but I’m certainly active [with the gym businesses,]” he said.