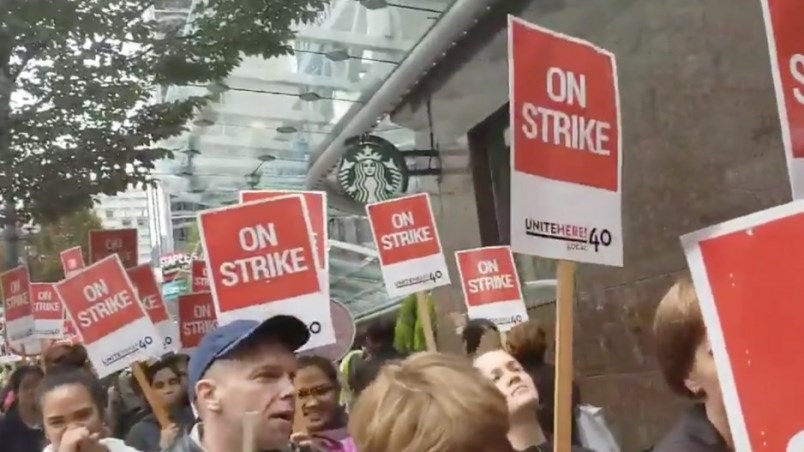 Three downtown hotels are suing Unite Here Local 40 and unknown striking workers, claiming picketers have unlawfully harassed and intimidated guests and employees while making a “substantial and unreasonable amount of deafening noise” since workers took to the picket lines on September 19.

“The Noise has continued each day since the strike commenced starting in the morning and continuing until the evening each day,” the Hyatt’s lawsuit states. “The Noise is intolerable and is causing a substantial and unreasonable interference with the use of land for guests of the Hyatt and members of the general public at or near the Premises.”

A week after the strike began, the hotels claim, picketers escalated their “unlawful conduct” when they began blocking access to vehicles while allegedly obstructing employees and guests from entering the hotel.

The union’s deal with the hotels expired June 30, 2018, and collective bargaining has yet to produce a new agreement. Unite Here Local 40 served strike notice on Sept. 9.

The hotels seek orders prohibiting striking workers from blocking exits and entrances, and from “using microphones, speakers, megaphones, air horns or any other electronic device to amplify sound,” or making “any noise” above 70 decibels. The union’s conduct, they claim, has caused “irreparable harm, loss and damages.”

The allegations have not been tested or proven in court, and Unite Here Local 40 had not responded to the claims by press time.