If you happened to be perusing Twitter at approximately 2:00 AM (and who isn't?) you probably already know that Nikita Tryamkin has decided to return home to Russia. Yep.
Apr 20, 2017 3:41 AM By: Will Graham 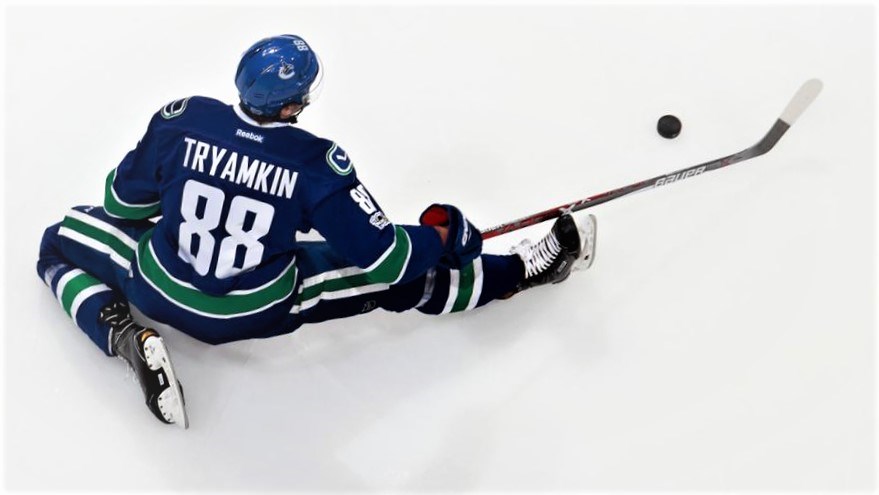 If you happened to be perusing Twitter at approximately 2:00 AM (and who isn't?) you probably already know that Nikita Tryamkin has decided to return home to Russia.

Yep. Just when you thought the horrors of this ill-advised gas station burrito of a season had subsided, it has returned again like a final wave of Montezuma's revenge.

Tryamkin has decided to return to Avtomobilist Yekaterinburg, the KHL team with which he spent the previous four seasons. I'm sure that language barrier and homesickness played into things, but he cited ice time as the biggest factor. Here's a quote (be sure to read it in Russio voce):

"During the season, I was not happy with some of the matches. Sometimes I just do not understand: why? I was able to play 20 minutes... I did not understand."

I'll tell you why: Willie Desjardins. The gift that keeps on giving.

It's hard to blame the gigantic defender. Despite showcasing a prodigious mixture of size, skating speed and occasionally even offensive jump, he ended the season with an average ice time of just 16:44. Evidently even the departure of former head coach Desjardins wasn't enough to assure him of a brighter future on the west coast.

I'm not trying to make Tryamkin out to be the second coming of ZBobby CharOrr (OK, that name-mashing worked a lot better in my head...). He clearly had some defensive issues at time, he was decidedly in over his head on multiple occasions, and he started the season with serious conditioning deficiencies.

Still, it's hard not to be supremely bummed by his departure. If nothing else, Tryamkin represented hope.

He is big, he is young, and he seemed to get better as the season wore on. His reach alone made many Canucks fans believers, and the cries for Tryamkin shirseys reached a fever pitch by season's end.

Furthermore, like a Magikarp, despite some flopping it sure seemed like he was going to evolve into a more effective form if he received enough experience.

Here's the problem: by the end of this season, a lot of Vancouver's future hopes were pinned on the unexpected emergence of two defencemen, Tryamkin and Troy Stecher. The duo were seen as the underpinnings of an eventual return to competitiveness.

Without him, Erik Gudbranson suddenly looks like a more essential part of Vancouver's plans. And that ain't great. Earlier this season we argued that Tryamkin rendered the more expensive Gudbranson obsolete. We stand by that assertion, but it only really flies if Nikita keeps wearing an orca.

So what does Vancouver do now? Hard to say, but I'd wager that it's a lot less likely now that Vancouver will trade away a defenseman for scoring help this offseason. And it also might mean top prospect Olli Juolevi sees NHL ice a little sooner than planned.

This isn't necessarily the last time we'll see Tryamkin in blue and green. He's a restricted free agent and Vancouver will continue to hold his rights.

But one thing is certain: we'll have to struggle through next season without the visceral joy (and limitless pun potential) of having a 6'7 Russian on the blueline. And that makes me pretty darn sad.