Two spirits, one struggle: The front lines of being First Nations and gay

Shortly after coming out, dancer Tyler-Alan Jacobs was beaten so badly that his right eye was dislodged and the side of his face was caved in.
Kelsey Klassen Jul 31, 2014 8:30 AM

Shortly after coming out, dancer Tyler-Alan Jacobs was beaten so badly that his right eye was dislodged and the side of his face was caved in.

Jacobs woke up in the hospital to the sight of his father leaving the room; his father couldn’t bear to look at him.

The pain was excruciating, and the $30,000 of reconstructive surgery would leave still-visible scars, but the fact that Jacobs had grown up with his attackers made the abuse even harder to move past.

Jacobs, 29, is one of a few hundred Vancouverites that identify as two-spirit – a First Nations term for gay, lesbian, bisexual, transgender, other gendered, and third/fourth gendered individuals.

“I knew that I was gay,” he says. “It was hard for me to come out to my family, but everybody already knew.”

The son of a prominent Squamish Nation councillor and artist, Jacobs says he had the support of his family as he pursued traditionally female crafts such as sewing and beadwork, and experimented with flamboyant fashion after puberty hit. Throughout the rest of his 4,000-person reserve, however, homophobia – a product of the historical trauma of colonization and residential schools – was rampant.

“I went through a really hard time,” says Jacobs softly. “I was beaten; more than once. I was choked.”

Like many two-spirit youth, Jacobs ultimately decided to trade his ancestral village for Davie Village, seeking the implied open-mindedness of an urban setting. Once off the reserve, however, two-spirited people often experience the additional pressures of racism and classism for being aboriginal. Without a strong support network, this can lead to heightened low self-esteem, self-destructive coping mechanisms, and high-risk activities.

Few statistics exist, but a survey of two-spirit youth aged 24 or younger, conducted by the Urban Native Youth Association in 2004, reported that 38 per cent of the respondents didn’t feel accepted in their communities, and 43 percent stated that they were suffering from depression. The results also revealed that 34 per cent felt more likely than non-two-spirit people to think about and attempt suicide, and same percentage agreed that they were more likely to become dependent on alcohol or drugs.

In the 10 years since that report came out, and despite repeated attempts to run two-spirit-specific programming out of UNYA’s East Vancouver youth centre, the drop-in programs have never gotten enough attendance to keep them going.

“I wish I could say that [it means they aren’t necessary], but I don’t think that’s the case,” says UNYA executive director Dena Klashinsky. “We think it may be because the youth still have some reticence, feeling comfortable and feeling safe. I think there still is a need, and it speaks to their vulnerability that they still have to be selective about where they choose to identify [as two-spirited].”

Historically, individuals with cross-gender identity were revered in First Nations cultures and looked to as leaders, visionaries, and healers. Embodying both masculine and feminine traits, two-spirit people were thought to be blessed with the ability to move between gender roles and were given important spiritual responsibilities as result.

The term two-spirit, while not a new concept, was actually selected during an international conference of gay and lesbian activists in Winnipeg in 1990 to replace the word berdache – a commonly used French denigration that translates to “male whore”.

In her essay, “N’Tacimowin Innan Nah: Our Coming In Stories”, University of Saskatchewan professor and Opaskwayak Cree Nation member Alex Wilson explains that “people make the assumption that the two [in two-spirit] refers to male as one and female as the other, or vice versa. In my view,” she writes, “the ‘two’ refers to a range of possibilities, such as being in a doorway and being able to see both rooms because of perspective.”

For some, two-spirit also represents their distinct First Nations experiences and traditions, and the way that culture and gender identity are tied together.

Gender roles were fluid in pre-colonial societies. Words to describe up to six different gender variants, beyond the binary of male and female, have been found in 155 indigenous nations of North America. The Cree, for example, refer to them as Aayahkwew (“neither man nor woman”) and the Navajo refer to them as nàdleehé or “one who changes”. To help individuals determine the gender they were drawn towards, rites of passage were often used.

It wasn’t until the onset of the federally run residential schools in the late 19th century, and the aggressive proliferation of European Christian influences that being gay became stigmatized.

“Only the warrior societies didn’t have a place for two-spirit people. Otherwise almost 90 per cent of all other tribes had a place for them,” says psychologist and Family Services counsellor Gil Lerat. “When the religious dogma of the residential schools came in, it erased a very rich history.”

The results were devastating.

As the founder of a two-spirited youth program in Vancouver in the mid-’90s, Lerat’s goal was to teach two-spirit youth about that history, instill pride in their identity, and encourage them to go take back their rightful place in their communities in a respectful way.

It’s an idea that still resonates. 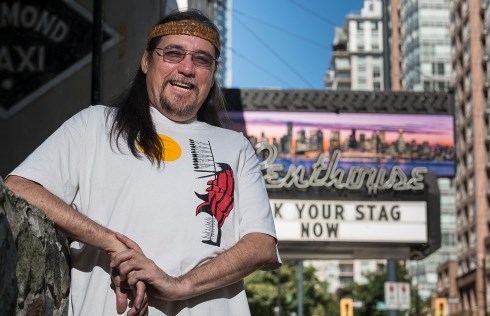 Home to 198 First Nations, British Columbia has the greatest diversity of Aboriginal cultures in Canada. And Vancouver has a population of roughly 40,000 Aboriginal peoples, many of whom have moved here from other areas of the country.

For 38 years, the Greater Vancouver Native Cultural Society has served as a surrogate family and cultural forum for the two-spirited adults among them.

In addition to its annual Wagonburners’ Christmas dinner, and events such as the Passing of a Legacy and Breaking of the Bannock, the GVNCS offers financial and emotional support to any of its more than 150 members who find themselves hospitalized with illnesses. Each year, a Princess and Chief, figureheads similar to the Imperial Court’s Empress and Emperor of Canada, are elected from the members to serve as ambassadors to both the gay and First Nations communities.

“Our long term goal was to get out of the whole bar scene, because we were known as the drunk society,” explains society president and two-time Princess Travis Angus. “We’ve gotten ourselves out of that, educated each other, and found the education to develop our culture and traditions. Now we are working towards bringing in our youth.”

To that end, the GVNCS has invited youth representatives from New York City, as well as Nisga’a Ts’amiks, Tsleil-Waututh, Lillooet and Squamish Nation to walk with them in traditional regalia this year in the Pride parade.

The GVNCS has also been invited by the Vancouver Pride Society to perform a Down Ceremony, or blessing of the land, at the close of the parade at Sunset Beach this year.

“When two-spirit people come here from different communities, they still have that huge fear of not knowing anything,” says Angus. “The GVNCS offers a home and a comfort zone for them to be in. We always have our doors open, no matter where they are. Even if they’re not involved with our events, they have our phone numbers if they need anything.”

Jacobs sits in a coffee shop at Granville and Davie wearing a backless halter top he embroidered himself and sporting a freshly pinked coif. He was recently asked to design a one-of-a-kind beaded moccasin for Manitobah Mukluks, dance at the opening of the Khatsahlano street party, and is designing his next clothing collection for Vancouver Fashion Week in September. He has a boyfriend. He has been out for nine years.

As Jacobs smiles, though, he can’t keep tears of both sadness and happiness from welling up in his eyes.

On the eyebrow above, a scar tells the story of that day in 2005, when wearing an outfit of ripped jeans, studs and gemstones was deemed worthy of nearly beating him to death.

He sits a little taller on his stool. “It built me to be who I am today. I have tough skin and I speak my mind and heart. A lot of people came out after. My cousin came out to his family and thanked me. I remember crying with him.”

Jacobs says discovering the meaning of his two-spirit heritage and reconnecting with it was a revelation. Instead of competing against each other, he says his two identities now overlap; and where they meet is where he finds his biggest sources of pride.

“Being proud is the key. I’m proud to be First Nations and gay. I have a big role in two communities and it’s an honour to be respected in both.”