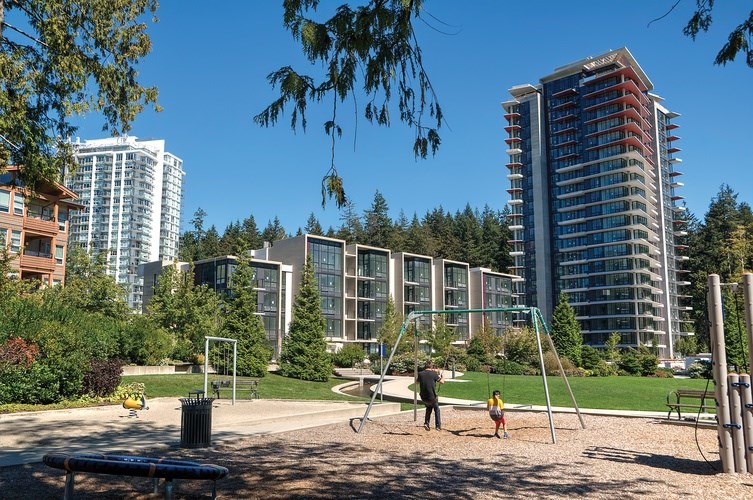 Like many parents with children, Eric Jan and his partner have given up the idea of owning a house in the increasingly expensive Vancouver.

“I’ve always known Vancouver to be expensive,” said Jan, originally from Toronto. “But I didn’t think it was going to be this expensive.”

But Jan and his partner — who have a three-year-old daughter and are expecting another child any day now — were able to find a happy compromise for a family home just outside Vancouver city limits at the University of British Columbia (UBC). The campus is evolving from a location solely for education to a residential community.

Jan and his partner live in a two-bedroom apartment at the campus’ Wesbrook Village area of homes and businesses. They expect to move into a three-bedroom place, also in the area, in a year and a half.

Jan, an associate professor in UBC’s department of biochemistry and molecular biology, wanted to stay close to the school. He checked out house prices on Vancouver’s west side, but they seemed out of the question.

“Obviously in the last few years we’ve been priced out of areas like Dunbar or Point Grey,” he said.

July 2016’s benchmark price for a detached house on the west side was about $3.6 million, according to the Real Estate Board of Greater Vancouver. And, dollars aside, the City of Vancouver has recognized a scarcity in two- and three-bedroom units for families.

“Adequate, affordable and attractive for family households with parents in their 30s and 40s is a necessity if the city is to ‘attract and retain talent’ and foster economic investment and development,” read a June 2016 city report.

The city is considering a new policy that will require 35 per cent of units in new strata buildings to be family units (25 per cent two-bedroom, 10 per cent three-bedroom). The policy carries similar requirements for rentals.

City staff noted a decline of families in census data: between 2006 and 2011, Vancouver gained only 100 new families, the first decline since 1991.

New Westminster, meanwhile, is the first city in Metro Vancouver to take this kind of action. A recent bylaw requires a minimum of 30 per cent family units in new strata buildings.

At UBC, the place Jan’s family will be moving into has an ample supply of family homes.

“We’ve had increasing demand for larger homes,” said Eric Andreasen, Adera’s vice-president of marketing and sales. “The reality is it’s tough to get single-family homes from going off the Richter scale in Vancouver. So families are adjusting. Everyone’s figuring out how to make ends meet in a smaller space – in a more effectively, more efficiently planned space.”

And though Wesbrook isn’t officially located within the city of Vancouver’s boundaries, the Vancouver School Board relocated University Hill Secondary School to Wesbrook in 2013 and also opened Norma Rose Point elementary in 2014. “There are four playgrounds within walking distance,” Jan said. “It’s a great place to raise kids.”

UBC’s planned community Wesbrook opened in 2009 and is located on the east end of campus. It’s population was about 4,000 as of last year, and it adds 600 to 800 new residents each year.

It is a growing community of homes and businesses with major retail chains but also “village”-feel spots like a fish market, a bakery and even a traditional barbershop.

“You can steal away from the hustle and bustle of the city as soon as you pass through Pacific Spirit park,” said Brennan Cuff, the village barber.

“I think the youngest haircut we ever did was three months old, and the oldest is somewhere between 95 and 100,” said Cuff. “We as a barbershop obviously benefit, as our demographic is everybody.”