The new material, which can be used to reinforce existing concrete walls, will be installed at elementary schools in Vancouver and India as part of the pilot project
Oct 11, 2017 3:23 PM By: Jessica Kerr 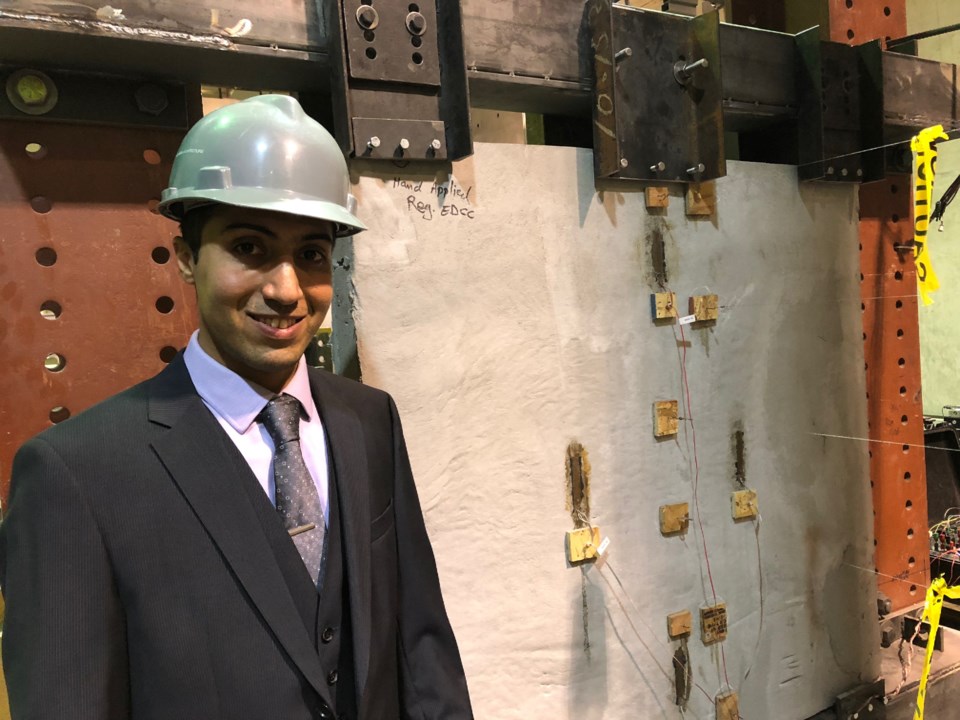 It’s eco-friendly, economical and it could be the saving grace when it comes to seismic upgrades to B.C. schools and other public buildings.

Researchers at the University of B.C. unveiled a new, earthquake-resistant concrete Tuesday morning. The material, known as eco-friendly ductile cementitious composite (or EDCC), will be applied as part of a pilot project at Dr. Annie B. Jamieson elementary school in Vancouver, as well as an elementary school in Roorkee, Uttarakhand, a highly earthquake-prone area in northern India.

Nemy Banthia, professor of civil engineering in the university’s faculty of applied science, said the material has been in the works for more than 20 years.

“This material can be sprayed on vulnerable structures to significantly enhance their resistance to earthquakes and save lives,” he said.

The material is engineered to be strong and flexible, similar to steel, and capable of enhancing the earthquake resistance of a seismically-vulnerable structure when applied as a thin coating. In an earthquake concrete usually cracks and then crumbles — the EDCC helps to hold the concrete together, keeping walls and buildings intact.

UBC PhD candidate Salman Soleimani-Dashtaki said the material was tested using earthquake simulations as high as the 9.1 magnitude earthquake that struck Tohoku, Japan in 2011. An untreated concrete wall crumbled after just a few seconds of shaking, while the wall sprayed with 10 millimetres of the EDCC remained standing. Engineers like to break things, Banthia said with a smile, and the wall eventually broke but it took shaking the equivalent of three times the intensity of the Tohoku earthquake, which would never happen in real life, he added.

Banthi said the material will be monitored to see how it performs when applied to the two schools before it is rolled out for other projects.

“Afterward, this can be very easily scaled to other projects… the cost effectiveness of this retrofit strategy is absolutely the one thing which is very attractive,” he said. “It only costs about half of what other retrofit strategies would cost. You can do twice as many schools for the same budget.”

Melanie Mark, minister of advanced education, skills and training, was on hand for Tuesday’s announcement. When questioned after the presentation, she said that she was just learning about the technology and there was no information about when it might be used in other schools in the province.

On Wednesday, Premier John Horgan was in Vancouver to announce the province will spend $47 million to replace Begbie and Bayview elementary schools, which are in danger of major damage or collapsing in an earthquake.

There are 346 schools in the province, 23 in Vancouver, that are considered at a high-risk of significant damage in the event of a major earthquake. In 2013, then premier Christy Clark announced $584 million to upgrade 45 high-risk schools, 16 of which are in Vancouver. A $24.5 million project at Lord Tennyson elementary school is slated to start next year, the seismic replacement for Lord Nelson elementary school is expected to be ready next fall and the seismic replacement for Gordon General elementary opened last December.

The EDCC is a combination of cement and polymer-based fibres, flyash and other industrial additives, said Banthia, making it a highly-sustainable material.

“By replacing nearly 70 per cent of cement with flyash, an industrial byproduct, we can reduce the amount of cement used,” he said. “This is quite an urgent requirement as one tonne of cement production releases almost a tonne of carbon dioxide into the atmosphere, and the cement industry produces close to seven per cent of global greenhouse gas emissions.”

The research was funded by the Canada-India Research Centre of Excellence, IC-IMPACTS, which is hosted by UBC and promotes research collaboration between Canada and India.

“This technology is gaining significant attention in India and will provide our Canadian companies a strong competitive edge in the growing global infrastructure market,” said Banthia, who is also IC-IMPACTS scientific director.

Earthquake safety will be front and centre next week with the annual Great British Columbia ShakeOut drill on Oct. 19. The Great ShakeOut is a world-wide one-minute earthquake drill, which will take place at 10:19 a.m., aimed at helping people practice what to do (drop, cover and hold on) in the event of a major earthquake.