Council approves two towers for Concord development on Expo Boulevard, but no date given on when nine-acre park will be built
Jun 11, 2014 12:17 PM By: Mike Howell 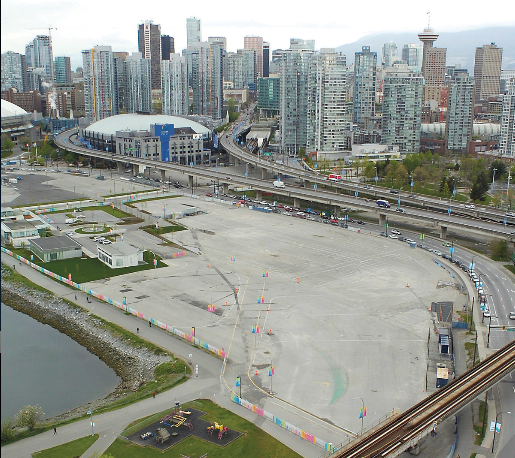 The City of Vancouver still can’t say when this nine-acre chunk of asphalt in False Creek will be turned into a park. File photo Dan Toulgoet

Vancouver’s head planner was unable to provide city council this week with a clear timeline as to when a developer will build a long-promised nine-acre park on the False Creek waterfront.

But Brian Jackson told council that Concord Pacific cannot be accused of delaying construction of the park planned more than 20 years ago for a strip of asphalt located near the Telus World of Science.

“I don’t think that there has been any foot-dragging with respect to the delivery of that park,” said Jackson during two nights of public hearings that concluded Wednesday night with council approving a condominium project proposed by Concord for 998 Expo Boulevard.

Council’s approval guarantees the city will get a site at 58 West Hastings for future social housing and a paddling centre in False Creek.

The park was not part of the community amenity package offered by Concord in the Expo Boulevard development, although False Creek residents argued it should be.

John Murray of the False Creek Residents’ Association urged council Tuesday night to give the public a firm commitment on when the park will be built.

In an exchange with Green Party Coun. Adriane Carr, Murray said the residents’ association would support Concord’s two-tower project on Expo Boulevard, if a timeline for the park were provided.

“The goal posts keep changing,” said Murray, who is part of campaign where hundreds of False Creek residents turn on green lights at night to symbolize the need for the park. “We do realize that there are complications here but we need to have some sort of commitment.”

Carr made an unsuccessful attempt to get council to set a timeline for the park to be built by 2018, a date Jackson suggested if a complex set of factors falls into place including the demolition of the Georgia and Dunsmuir viaducts.

The nine-acre park site is a small piece of the 204 acres of land Concord Pacific bought from the provincial government in 1988.

Concord paid $320 million for the former Expo 86 lands that run from the Granville Bridge to the Telus World of Science. Concord has developed most of the lands, constructing condominiums and parks, as well as marinas on the water lots.

Jackson said the nine-acre park site has remained idle since the purchase because Concord planned to first build out the other lands before constructing the park.

Since then, the construction of the park has been further complicated by an ongoing study to determine whether the Georgia and Dunsmuir viaducts will be demolished, which could free up more land possibly for park space.

That decision isn’t expected until next summer.

Furthermore, the residents’ association filed a petition in B.C. Supreme Court in May in an effort to stop the city from continuing to issue Concord a temporary permit to operate a sales centre on the park site.

The residents’ association says Concord is operating on land designated for green space. The developer, they say, has also reaped significant profits from renting the property to various organizations over the years.

The Quebec government, for example, paid Concord $1.3 million to set up the Maison du Quebec on the property during the 2010 Winter Games. Cirque du Soleil is currently using the property for its Totem production, which runs until July 6.

Jackson acknowledged the residents’ legal challenge in an exchange with Vision Vancouver Coun. Geoff Meggs, who asked when the park could be expected to be built.

“To be honest councillor, we’re now constrained by the fact that we have a lawsuit against us,” Jackson replied. “That will affect our ability to negotiate on the park. It will constrain our ability. We will be spending a lot of time in preparing for a court case.”

The park was part of the discussion at the hearings after Concord applied to get a rezoning application approved to build 28-storey and 30-storey residential towers at 998 Expo Boulevard.

The staff report for the development pointed out the park cannot be developed until Concord decides to develop another parcel of land adjacent to Rogers Arena.

That land, known as Area 6 in planning documents, is filled with contaminated soil left over from False Creek’s industrial past. The plan calls for the developer to dump the soil on the park site, where it will be remediated. It’s a requirement of the provincial government, which will pay for the costs of soil remediation.

Concord said in a statement on its website that rezoning of the land could happen within three years. The statement cited the city’s ongoing study on the viaducts and planning delays during the 2010 Winter Olympics as reasons for not proceeding with a rezoning application.

“Although we have been delayed and impacted, we understand the 2010 Games and the viaduct studies were and are important civic initiatives,” the statement said. “We are as anxious as our neighbours to see our waterfront developments and the park completed as soon as possible.”

More than 60 speakers at the hearing told council they supported the Expo Boulevard project, which includes the developer building a $4.2 million paddling centre outside the Creekside Community Centre. The majority of speakers were from the dragon boat community, including coaches and senior staff of organizations promoting the sport.

Note: Meggs decided to participate in the two nights of hearings, despite the residents’ association requesting he recuse himself after posting a write-up on his blog about the hearing and linking to Concord’s website.

The Courier obtained a copy of Meggs’ post but nowhere in his write-up did he say whether he would vote for or against the project on Expo Boulevard.

“I took [the blog post] down because of the public concern,” Meggs told council before the hearing began. “I certainly regret the distraction that it caused but I’ve reflected on it, I’ve discussed it with lawyers who have given me legal counsel and I’m very comfortable I acted appropriately under the circumstances.”

At the close of the hearing Tuesday, Mayor Gregor Robertson reminded councillors “not to get into conversations on this subject while we’re in public hearing mode.”

With a decision made Wednesday night, Meggs has since re-posted his entry on the Concord rezoning.