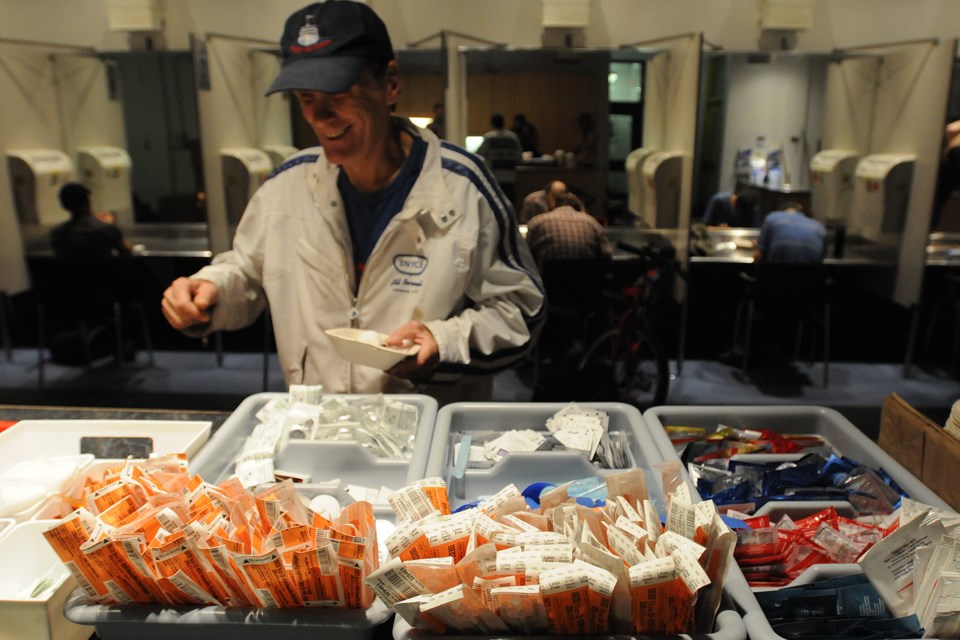 The Insite drug supervised injection site on East Hastings began operating in September 2003. Health authorities say no one has died in the facility of a drug overdose. Photo Dan Toulgoet

But the city’s former drug policy coordinator is worried legislation passed by the Harper government this week in the House of Commons will make it difficult for more injection sites to open in Vancouver and across the country.

“That’s the problem with all this,” said Donald Macpherson, the director of the Canadian Drug Policy Coalition. “I know how much work it is to apply for one of those exemptions. So this is really a make-work project by the federal government for health authorities, community groups and provincial governments. It’s a lot of work.”

The legislation passed in the House of Commons is known as the Respect for Communities Act. Health officials and harm reduction advocates described the bill as setting out an onerous list of criteria that makes opening another injection site in Canada very difficult, if not impossible.

Under the bill, criteria an applicant must meet to get an exemption includes providing information outlining the views of police, municipal leaders, public health officials and provincial health ministers.

The applicant is also required to provide documentation that shows the site’s expected impact on crime rates, treatment options for drug users, the public health reasons for needing such a site and evidence there are resources to sustain the site's operations.

Dr. Patricia Daly, the chief medical health officer for Vancouver Coastal Health, wasn’t available for comment this week but said in a statement the health authority was “troubled by the numerous conditions set out in the new legislation, which will make it much more difficult for Insite to apply for an exemption in the future, and near impossible for a new supervised injection site to receive exemption under the Controlled Drugs and Substances Act.”

Daly pointed out Insite, which is staffed with nurses supervising injections at the East Hastings facility, prevented thousands of overdose deaths, reduced the spread of infectious diseases such as HIV and hepatitis C and connected drug users to detox, health care and housing.

Studies published in various medical journals, including the Lancet and the New England Journal of Medicine, concluded Insite saves health care dollars and does not increase crime or perpetuate active drug use.

Federal Health Minister Rona Ambrose told the Courier in October 2013 the Supreme Court of Canada ruling in 2011 to allow Insite to operate indefinitely “does compel the government to ensure that whenever an application is made for a supervised injection site, that certain parameters are met. That’s exactly what our legislation is about and, as health minister, not only am I compelled but I’m obligated to do that.”

When asked about the scientific research done at Insite, which has shown no overdose drug deaths, a decrease in the spread of infectious diseases and drug users being referred to treatment, Ambrose said she was “not interested in having a debate about harm reduction.”

Since the Supreme Court of Canada ruling in 2011, in which the court said Insite has “proven to save lives with no discernible negative impact on the public safety and health objectives of Canada,” the federal government said the health authority must apply for an annual exemption from Health Canada to operate Insite.

The matter landed in the Supreme Court because of the federal government’s appeal aimed at shutting down the facility that began as a three-year scientific experiment when the Liberal government was in power.

The health authority says no one has died of a drug overdose at Insite, where nurses have supervised more than 1.8 million injections since it opened 12 years ago. Up to 800 clients visit Insite each day.

Health Canada, meanwhile, still hasn’t decided whether to grant an exemption to the Dr. Peter Centre, which has operated a three-booth injection room for its registered clients since February 2002. The injection room is a small component of the centre, which houses a day health program and a 24-hour care residence. The facility caters to people with AIDS and those dealing with mental health and addictions issues.