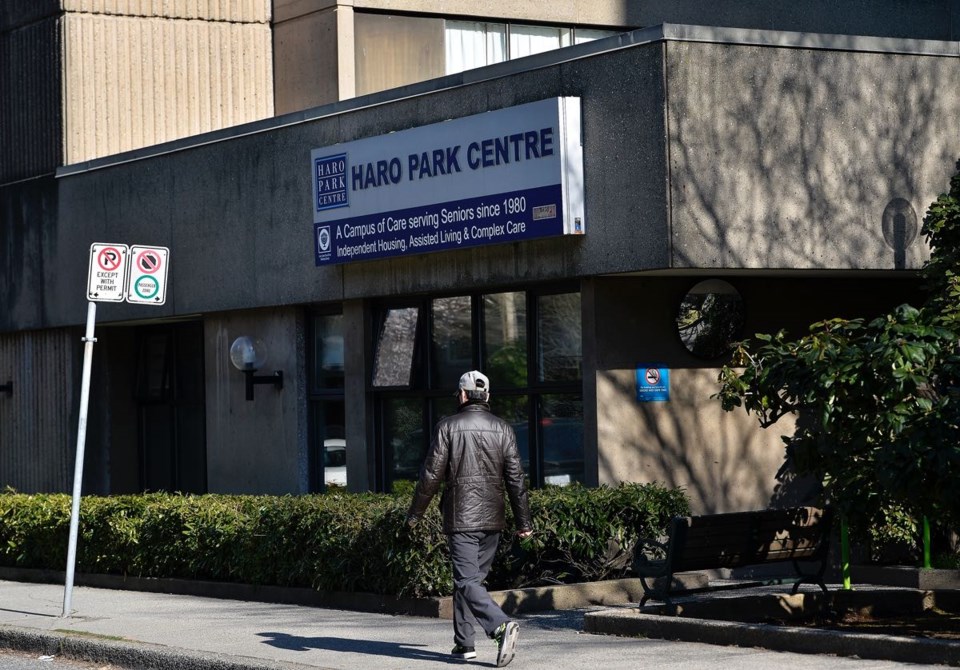 The Haro Park Centre in the West End has recorded one death and now has 10 residents and 12 health care workers who tested positive for COVID-19. Photo Jennifer Gauthier.

A resident of a seniors’ care home in the West End has died after contracting COVID-19 while 15 residents and 25 staff at the facility on Haro Street have also tested positive for the virus.

Provincial Health Officer Dr. Bonnie Henry reported the update in cases at Haro Park Centre in a briefing to reporters Tuesday, where she also announced the infection rate at the German-Canadian Care Home in south Vancouver remains at one staff person.

That now brings the number of seniors’ homes in B.C. affected by the coronavirus outbreak to eight, including the Lynn Valley Care Centre on the North Shore, which has seen 10 of its residents die in the last month.

All but three of the 13 deaths recorded in the province have occurred at Lynn Valley.

A further 42 residents and 21 health care workers have tested positive for the virus at Lynn Valley, which has the most cases of all long-term care facilities in the province, possibly Canada.

The Hollyburn House Care Centre in West Vancouver, Dufferin Care Centre in Coquitlam and Delta View Care Centre in Delta have either had residents, staff or both who have tested positive for COVID-19 since the outbreak reached B.C. in January.

A staff person at Little Mountain Place on East 36th Avenue in Vancouver and a resident at Evergreen Heights in White Rock have also been infected with the disease, said Henry, noting the spread of the virus in care homes is believed to be connected to staff who work at multiple facilities.

“This a reflection of that fact, and we are doing a concerted effort across the province to now thwart that out so that we can assign people to a specific long-term care home,” she said.

“That is something that has been undertaken as an urgent issue in the last couple of days, and we expect to have that worked out by the end of the week.”

The order issued March 21 prohibits long-term care staff and volunteers from working at more than one health care facility. The order does not apply to doctors, paramedics and lab technicians.

The order requires facilities to deny access to all visitors to a facility, with the exception of immediate family members and a spiritual advisor of a resident “clinically assessed to be at the end of their lives.”

Transfers of residents between health care facilities, unless approved by a medical health officer, are prohibited. All facilities must increase cleaning and enhance screening of staff, contractors and visitors and adhere “to higher standards for notification of cold and flu-like illnesses.”

Henry said Tuesday that 145 more people had tested positive for COVID-19 since Saturday, bringing the number of cases in B.C. to 617.

Of those, 330 were in the Vancouver Coastal Health region, which includes Vancouver, Richmond, the North Shore, Sunshine Coast, Powell River and Bella Bella.

As of Tuesday, 59 people were in hospital in B.C., with 23 in intensive care. The good news, the doctor added, is that 173 of the 617 people who contracted COVID-19 have fully recovered.

“That’s a really positive thing, it shows us that most people —particularly young healthy people who have milder illness — are able to be managed at home, and are recovering,” Henry said.

“The other positive thing around that is that we’re learning from around the world that once you’ve recovered from this, you have immunity for a period of time, at least for the next few weeks to months.”

Health Minister Adrian Dix, who joined Henry in Victoria Tuesday, cautioned the outbreak is going to be a struggle “for weeks and for months ahead of us — that it’s not going to end anytime soon.”

Dix reiterated a plea he’s made several times that citizens must continue to physically distance themselves from others when in public to break the chains of transmission of the disease.

“The number of cases we’ve been seeing will continue to rise — it will,” he said.

“The next few weeks will be very, very difficult. It will be some time before we see the change we’re all working towards.”

Health care workers are testing approximately 3,000 people per day, with nearly 18,000 tests as of March 20. More than 30,000 people have been tested since the outbreak.

Henry reiterated that not everyone requires a test.

People can self-assess themselves with an on-line tool available via the B.C. government’s website. Henry was expected to provide another update Wednesday.