Inside the boxing ring his nickname was the The Teacher. Now, when he steps inside the classroom, where he teaches at-risk teenagers in East Van, the kids just call him Manny.
Jul 12, 2011 9:00 PM By: Vancouver Courier Staff 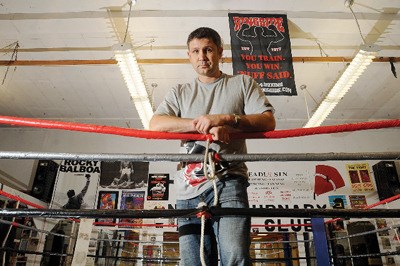 Inside the boxing ring his nickname was the The Teacher. Now, when he steps inside the classroom, where he teaches at-risk teenagers in East Van, the kids just call him Manny.

Many of his students especially the ones who have a dad or uncle whos a fight fan know Manny Sobral is Canadian ring royalty, the former International Boxing Organization (IBO) champ.

Sobrals got a masters in education now, but its his pugilistic past his slightly dented nose and scarring around his eyes clear evidence of his former occupation that gives him instant cred with the troubled kids, most of whom are fighting against adversity.

Like he did in the ring, Sobral brings measured calmness to the classroom. It keeps them in a calm space and opens their minds. Its hard [to learn] if you are intimated, says Sobral, now 42.

But he still possesses an icy stare, one honed during countless press conferences and weigh-ins to intimidate his opponents, to occasionally remind students that he means business. Sobral says boxing is a metaphor for life: you can be down and out and then, with one shot, youre back on top. Thats one lesson he hopes to impart to the kids. Equally important to becoming a winner: dedication and determination.

Success is not something that happens overnight. You have to put in an effort, he says.

He should know. Sobral, whose parents emigrated from Spain to Canada when he was six, grew up in East Van and started boxing when he was 13 after walking into the Inner City Gym near Main and Hastings. He was a chubby kid who wanted to lift weights to shed some pounds. An old-school boxing trainer named Steve told him to start hitting the heavy bag instead if he wanted to lose weight.

He made a difference [in my life], says Sobral.

Not long afterwards, the callow young fighter stepped into the ring. Sobral lost his first bout but wasnt discouraged. He just trained harder; it was an important lesson. He went on to fight out of the legendary Astoria Gym on East Hastings under the tutelage of George Angelomatis, where he compiled an impressive amateur record: three national championships, five international golds and a trip to the 1988 Olympics in Seoul, Korea.

Despite his sparkling amateur record (135-11), Sobral was reluctant to turn pro. He knew how tough the sport could be: unless you were Sugar Ray Leonard, big money pay-days were rare; plus, hed witnessed other young fighters implode after their pro careers stalled. So he enrolled in university instead. I was never going to box professionally. I didnt want to end up like that, says Sobral. I felt it was important to have a backup.

After he earned his education degree and started teaching in high school, he started to miss the ring.Boxing is like drug, he explains the training, the crowd, the opponent, the chess-like strategy.

But, he adds, the fight game can also deliver the biggest lows too. In 1993, Sobral began fighting professionally. Soon he was training full-time in Vegas and had the Canadian and IBO world super welterweight championship belts. It was a big accomplishment, he says of the IBO championship win over Detroits Aaron McLaurine at the Pacific Coliseum. It was the first time I went 12 rounds.

In 1999, he had a title fight scheduled for the vacant British Commonwealth belt but his opponent, a fighter from Australia, was replaced at the last minute. Against his better judgement, Sobral stepped into the ring against Tony Badea, a fighter hed beaten two years earlier in a bout that was voted fight of the year by the Canadian Professional Boxing Association. After breaking his fibula in the second round (which was not diagnosed until after the fight) and getting cut up for 60 stitches, he lost in the sixth. Demoralizing, is how Sobral sums it up.

His carefully crafted pro record was no longer unblemished: he was 28-1.At the time he was ranked 6th by the WBC, but dropped to 15th. Looking back, he figures his corner should have stopped the fight in the third because of the bleeding above his eyes which would have had the fight scored a no-contest, meaning hed remain unbeaten.

I think I would have got a chance at Oscar De La Hoya, he replies when asked about what the loss meant to his career.

Boxing can be a ruthless sport. After just one pro loss he says fighters become damaged goods. Like a race horse, youre never the same.

After the loss Sobral was offered other fights but his role had changed. HBO called to see if hed take a fight with champ-to-be Jermaine Taylor but he didnt want to be a stepping stone fighter somebody used for other boxers to climb the rankings. He knew it was time to walk away.

You dont want to get hurt, he says, noting that many fighters hang on too long and end up punch drunk.

Besides, he had another career. And through boxing he says hes better able to connect with the kids hes now working with. Its all about building relationships.

Along with teaching the kids math, science, social studies and English through a satellite Vancouver School Board program, he also runs a boxing class. He points out the students dont spar, they just hit the bag and hand pads, skip rope and do other boxing training. That program gets the kids in shape, gives them confidence and boosts self-esteem, he says. The key to life is walking with your head up, feeling you can do or accomplish something. It doesnt have to be boxing. It could be music or storytelling and that can translate to other things.

Sobral beams like a proud father when recalling recently walking into a bank on Hastings and seeing a former student working there and then seeing another student working at EA Sports when he was there doing some work for a boxing video game. Its real life success. You develop attachments to those kids, says Sobral. Helping kids learn is one of the most satisfying things for me.