Vancouver Aquarium banned from breeding whales by park board

The Vancouver Park Board voted unanimously on Thursday to ban the Vancouver Aquarium from breeding captive whales and dolphins, unless an endangered species is involved.
Aug 1, 2014 9:49 AM By: Stanley Tromp 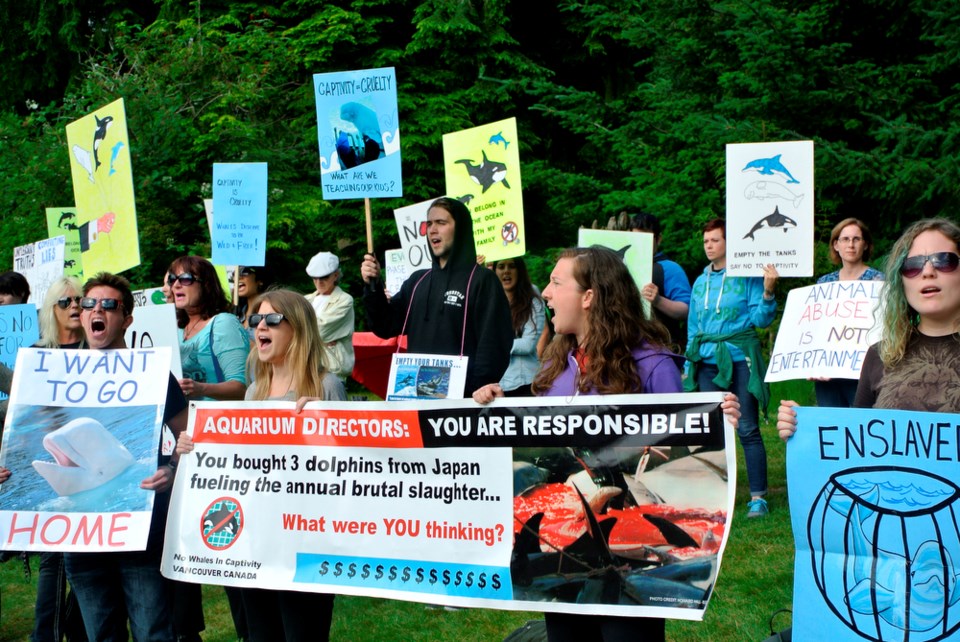 Members of groups such as the Sea Shepherds and No Whales in Captivity have protested outside the aquarium in the past. Photo Chris Cheung

The Vancouver Park Board voted unanimously on Thursday to ban the Vancouver Aquarium from breeding captive whales and dolphins, unless an endangered species is involved.

The board’s four-part motion also told park staff to create a public oversight committee made up of animal welfare experts “to ensure the well-being of all cetaceans” and report to the board twice yearly. Staff must investigate alternatives to cetacean exhibition, continue to research cetacean release and begin a detailed study of care standards within the aquarium.

But the board stopped short of introducing the measure most feared by the aquarium — demanding that the facility (which it licenses) phase out its whale and dolphin program entirely.

It was a subdued conclusion to three days of special meetings, an attempt at a compromise that satisfied very few animal activists or aquarium supporters. “Some think we went too far, some not far enough,” Vision Vancouver board chair Aaron Jasper told the media afterward the meeting.

He added that nothing in the motion should be seen as an attempt to phase out cetaceans from the aquarium at present. “We do not want to jeopardize any of its good works,” he said, noting the facility’s routine should be "business as usual."

Aquarium CEO John Nightingale, speaking outside the building and looking distressed, disagreed. “We’re most deeply disappointed, at the park board’s decision to take management of the animals and our mission away from the experts at the aquarium and transfer it to the politicians,” he said. “If these changes go ahead, they will put in peril many of the things that make this aquarium a global leader.” He said creating an oversight committee is exactly how the Toronto Zoo lost its accreditation.

“We were uncomfortable with this aquarium’s breeding program here, but they are still free to do it in American aquariums,” said Jasper.

He said the facility will have to find a way to stop whales from breeding. “They’re in a tank, which is a necessary evil. Nothing about this is natural.” He added that male and female whales prefer to stay amongst their own gender group.

Nightingale responded that the aquarium doesn’t operate a formal breeding program. “We keep animals together in healthy groups just as they exist in nature. Heathy animals sometimes mate.  So keeping them apart or by whatever methods the parks board might mandate is not natural. It’s animal cruelty, which is the opposite of what they say they want.”

Over two days of hearings, board members heard about 80 speakers from both sides and were sent thousands of emails. Many of these messages were emotional, and strong feelings lingered Thursday.

Jasper was asked at what future time cetaceans might not be housed in the aquarium anymore. “I hope in my lifetime,” he replied. “As a father of two young children, I am proud of what we began today.” He paused and began to choke up. “If we ever had another baby beluga die in a tank here, and I had to tell my kids, that would be pretty tough.”

Jasper said board member were “shocked” to discover that the aquarium had many more whales than they knew about, but Nightingale replied that the facility had no contractual duty to inform the board of this, that he was always transparent, and there were many other ways for the board to learn such facts if it had tried.

“They believe they play a larger role in running the aquarium than we think they do, or they ever have in history, in the way they talk of ‘our belugas’ and ‘our programs,’” said Nightingale.

Nightingale also lamented the debate's time and cost. “You can ask the parks board how much public money they spent, but they cost us a couple of hundred thousand dollars and thousands of hours that I would have much rather put into the launch of our new Coastal Research Institute and others research programs. Those have been dead in the water for the past four months thanks to this process,” he said.

“I think there is some naiveté, for none of them are whale experts, nor have taken care of a cetacean for a day in their lives,” said Nightingale.

Said Jasper: “I’m not a whale biologist, I’m a realtor, and sometimes you just have to go with your gut.”