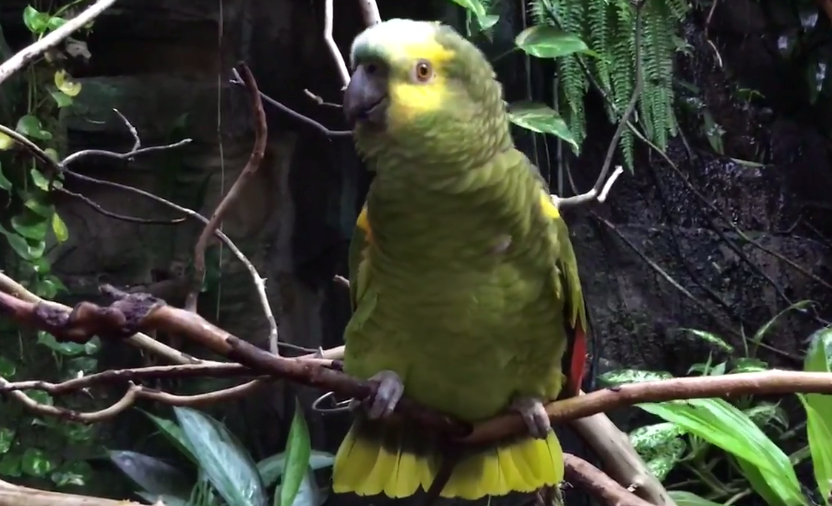 Cosmo loves to squawk along to 'All I want for Chrismas' by Mariah Carey.Vancouver Aquarium

Meet Cosmo, she’s a blue-fronted Amazon parrot, and she, like many of us, can’t help but sing a long when Mariah Carey’s ‘All I Want For Christmas Is You’ tune comes on the radio.

She lives in the Graham Amazon Gallery along with Gino, a double yellow-fronted Amazon parrot, scarlet ibises, red-footed tortoises, and more feathery friends.

But you’ll probably hear Cosmo before you see her.

Andrea Cotter, assistant curator at the Amazon, says the 21-year-old parrot is very vocal and seems to love power ballads by female artists the most (think Adele or Whitney Houston).

“In addition to Mariah Carey’s ‘All I Want For Christmas Is You’, Cosmo also quite likes Bing Crosby’s rendition of ‘I’ll Be Home For Christmas’," she says.

Cotter says enrichment is an important part of animal care at the Aquarium and sessions take different forms based on the animal.

“For the parrots, enrichment is quite varied,” she explains.

“Sometimes it's a change of scenery or exposing them to new places, sights, smells, and sounds - like playing music.

“For Cosmo, who sings along to the radio or joins in when her care team are humming or whistling while they work, music enrichment is a favourite. Her team has also told me that she likes to mimic the sounds she hears – like a siren (“woo-woo”) or a crying baby.”

Cosmo has been in the Aquarium’s care for the past eight years now and over time she has become quite the entertainer - she's even got music videos on YouTube.

“Cosmo was a pet and, due to exceptional circumstances at the time, was taken in by the Aquarium [the Aquarium usually doesn’t take in surrendered pets]," Cotter says.

The Aquarium posted Cosmo’s musical talents on its Facebook page on Friday and viewers can’t get enough of it. It's already been viewed more than 6000 times and she’s fast becoming known as the caroling parrot.

Visitors to the Aquarium can learn more about Cosmo, Gino and parrots in general by visiting the Amazon Gallery or during the ‘Meet a Parrot’ program that takes place in the Teck Engagement gallery at 11:40 a.m. on Wednesdays.

Similar to playing music for the birds, the 'Meet a Parrot' program acts as an enriching experience for the animals. It also gives visitors a chance to get up close to the incredible birds and learn more about their species, the challenges that they are facing in the wild with a rapidly declining habitat, and how people can help.

In addition to the ' Meet A Parrot' program, visitors can also go to the Graham Amazon Gallery for bird training sessions daily at 1:30 p.m.