Brad McTavish travelled halfway across the globe, flipped the script by more than a millennium and ended up with a world first.
Sep 6, 2016 3:03 PM By: John Kurucz 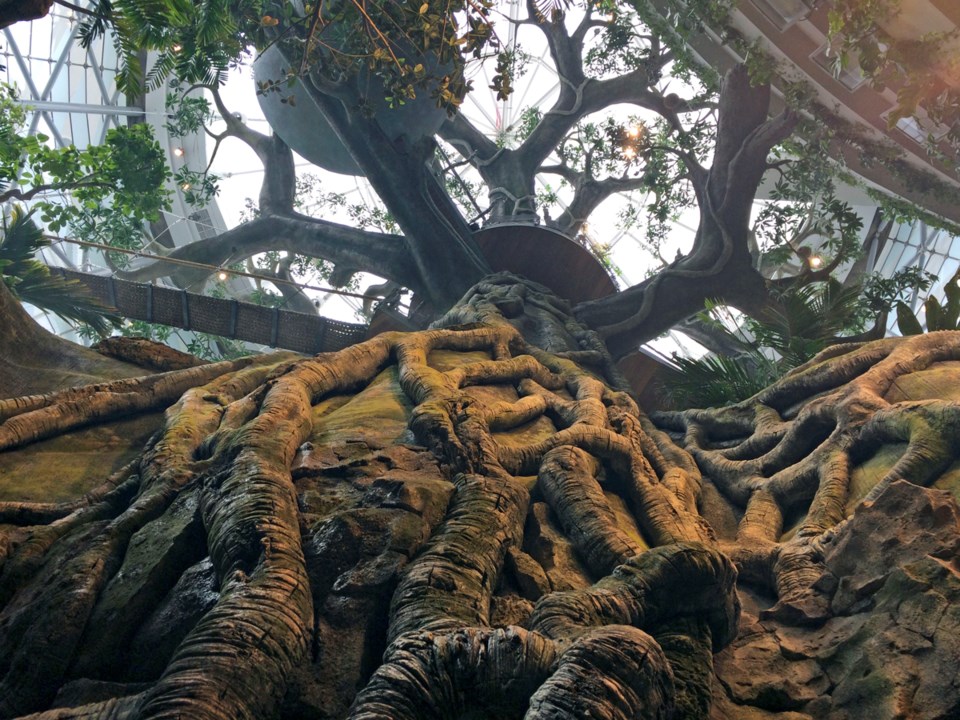 The Green Planet bio-dome, which opened in Dubai last week, is anchored by a 70 metre-tall kapok tree.

Brad McTavish travelled halfway across the globe, flipped the script by more than a millennium and ended up with a world first.

The Vancouver-based architect headed up the creation of a project in Dubai called The Green Planet, a bio-dome that mimics an equatorial rainforest setting complete with more than 3,000 plants and animals.

The facility opened its doors last week and represents the culmination of three years’ of work by a team of scientists, planners, horticulturists and wildlife experts spanning the globe.

“This particular project is a game changer for Dubai because it’s not merely just an attraction — it’s a factual, science-based education facility that [Dubai] has never done before,” McTavish told the Courier.

Structured as an origami-styled glass building, The Green Planet features a tropical rainforest setting with the flora and fauna to back it up: South American toucans, crocodile lizards, porcupines, stingrays, arapaima and more.

The bio-dome is anchored by the presence of the world’s largest indoor, man-made and life-sustaining tree. Growing to upwards of 70 metres, the kapok tree fully represents the circle of life: it starts life in a flooded river where fish plant its seeds and its various layers become home for different species of butterflies, toucans, chimpanzees and monkeys.

Strangler figs then grow at its base, enveloping the tree and eventually taking it over entirely.

“For The Green Planet, the one iconic element that everyone could relate was the story of the kapok tree and how that is the totem of the tropical rainforest,” McTavish said. “The species that inhabit its various layers tell the story on the rain forest and they really are the sentinels of the rain forest.”

The Green Planet also includes 15 educational programs across five topics and three age groups. It’s meant to give residents of Dubai a glimpse into life in their area more than a millennia ago: it was a tropical rainforest at that time, which is why it is now known for its oil-producing capacity.

McTavish’s firm was first approached by Meraas, a Dubai-based holding company, to take on the project three years ago and was given a $65-million funding envelope to make it happen. Meraas is the sheik of Dubai’s personal development company in charge of entertainment, leisure and education facilities.

“When I realized who Meraas was, I said, ‘OK, yes. I will be there,’” said McTavish, whose firm has also overseen local projects including the Robson Square ice rink and Terry Fox Plaza.

Replicating a tropical rainforest in a region used to temperatures exceeding 50 C didn’t come without its challenges: the group had four weeks to present an initial concept design and the three-year turnaround was going to be tight. McTavish’s firm reached out to scientific experts across North America to get it done and was back in the Middle Eastern country within a month to hammer out the specifics.

“I went back to Dubai and was sitting there in the middle of July,” McTavish recalled. “They came to me and said, ‘This is where we would like you to build the facility.’ It was 52 C. We were standing there and thought, ‘OK, this is going to be a real interesting mission.’”

Fast forward to last week, and thousands reportedly took in The Green Planet’s opening. Two-hour lineups in 47 C weather served as proof that he and his team had done good.

“Watching people’s faces light up is perfect,” he said. “It’s quite overwhelming, when you come from sand, sun and 40-plus weather and you come into this lush rain forest, it’s a very rewarding experience.”

More info on the Green Planet can be found online at thegreenplanetdubai.com/en.