18 Pounder First World War Howitzer has found a home at the Bessborough Armoury in Kitsilano
Jul 3, 2018 3:13 PM By: John Kurucz 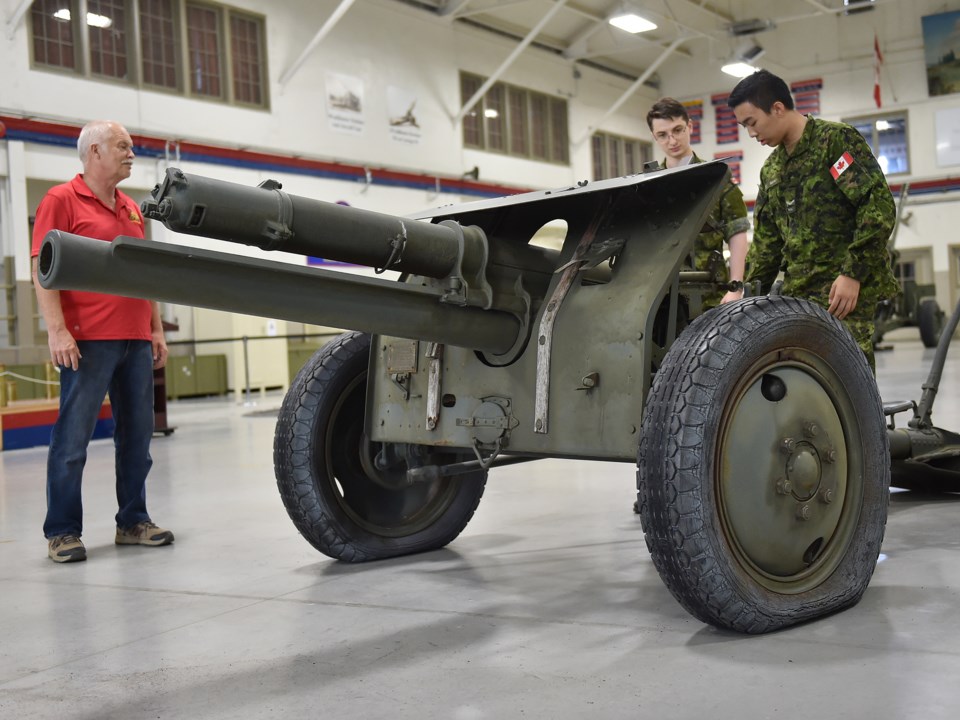 Leon Jensen (left) along with bombardier Bojan Aleksic (centre) and gunner Guan Joseph have a look at the newly-acquired 18 Pounder First World War Howitzer at the Bessborough Armoury.

When Leon Jensen says he’s bringing out the big guns, he’s not making a dad joke, leaning on hyperbole or blowing smoke.

A retired military colonel and president of the Vancouver Artillery Association, Jensen’s life has revolved around big guns for decades.

The newest addition to Jensen’s collection arrived last week in the form of a 2,000-pound Howitzer manufactured in 1918. Referred to as a Quick-Firing 18 Pounder field gun, it’s one of only six in Canada and the only weapon of its type in B.C.

It found a permanent home June 28 at the 15th Field Artillery Regiment Museum, located in the Bessborough Armoury in Kitsilano, after decades of collecting dust in Wainwright, Alta.

Now Jensen and the roughly 30 other members of the association are researching its past, while attempting to refurbish it for the present.

“It’s in amazing condition considering it’s been sitting outside for 35 years,” Jensen said. “There is no real rust damage to it, none of the metal has been eaten through.”

The artillery association is affiliated with the Vancouver-based 15th Coast Artillery Brigade. Soldiers in those units fought in the First World War and a handful of other large, historic guns dating back to the 1800s are housed in the Kitsilano armoury.

“Because we’re the guys behind the battles, a lot of our history goes with the guns,” Jensen said. “So we’re trying to get a collection of guns that represent our history.”

The 18 Pounder was a standard issue artillery weapon used on the front during the First World War. It was the gun nearest to the soldiers in the trenches. Similar guns were used in some of Canada’s bloodiest battles at Vimy Ridge and in Flanders, Belgium.

Its name reflects the weight of the shells fired, which could travel upwards of seven kilometres. Seven soldiers typically manned each gun.

“Its effectiveness was on the ground through shrapnel, and it was used a lot to cut through barb wired entanglements,” Jensen said.

Whether Jensen’s newest addition was used in battle isn’t clear, though some of the units affiliated with the 15th regiment saw combat action in northern Russia during the First World War.

The prevailing theory is that the 18 Pounder was likely used to train soldiers domestically in Vancouver and Richmond. A pair of 18 Pounders were stationed off Steveston during the Second World War as part of Canada’s coastal defence.

What Jensen and company do know is that it was shipped to Canada from Great Britain in 1945. It bears the cipher of King George V and some of its parts were manufactured in Canada.

Getting the gun to Vancouver was precipitated by a stroke of good timing and good luck. Canadian Forces Base Wainwright was in the midst of renovation work and the 18 Pounder was sitting idle. Jensen’s colleague took a photo of the gun, sent it to him and a plan was put into action.

Outside of posterity, what the gun will be used for moving forward isn’t clear. The firing mechanism doesn’t work, and some renovations need to be done.

“There’s probably a bird’s nest down the barrel, but we’re not too sure,” Jensen joked.

The artillery association is updating its website as more about the weapon is uncovered.