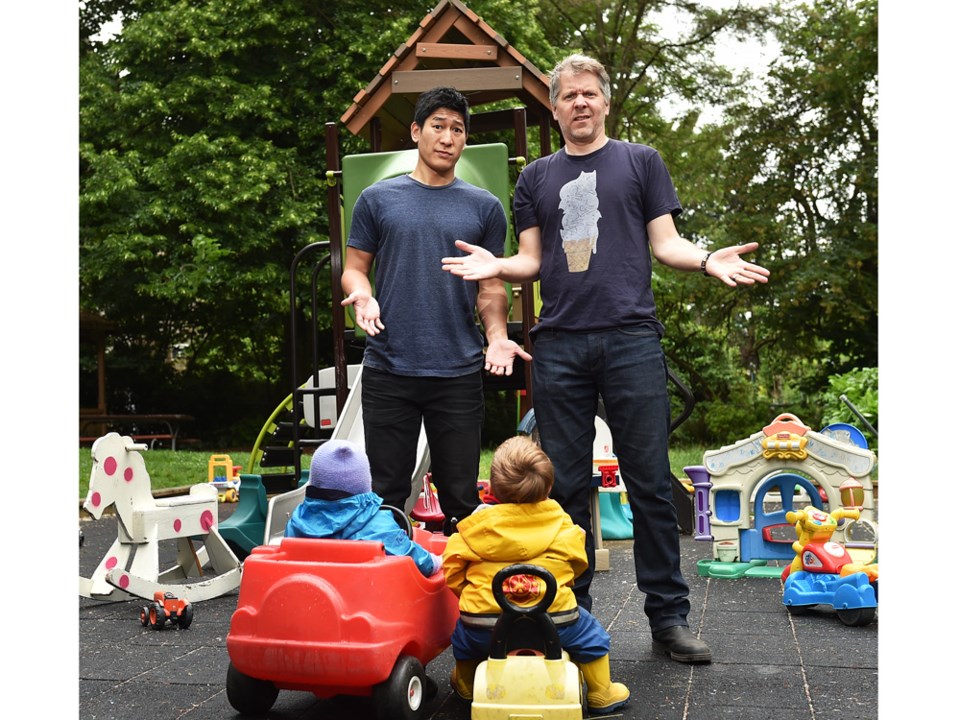 Pierre Chan and Scott Schneider are the creators behind a soon-to-be-released book called Dumb Answers to Kids’ Questions. Photograph By Dan Toulgoet

There’s an interesting dichotomy at play in Pierre Chan’s world.

On one hand, he suggests he likes kids. On the other, Chan refers to them as “pint-sized dweebs.”

He’s happy to mingle with other people’s offspring, but the thought of having his own makes Chan want to “stand next to a microwave and burn all of my sperm.”

It’s against that backdrop of humour and irony that Chan delivers to the world his second book, Dumb Answers to Kids’ Questions. Spread over more than 100 pages of text and illustrations, Chan and illustrator Scott Schneider go after all the sacred cows of kids’ questions — birth, death, the afterlife — with colour and playful contempt.

“Kids are great, kids are cute, kids are fun and kids are innocent,” Chan told the Courier. “You can impart your messed-up wisdom on them. But I just don’t like the negative aspects of kids. I’m too irresponsible and too selfish to want to have a child.”

The book is formatted to avoid the standard question-and-answer format and instead plays on interactions. One example sees a young girl asking an astronaut if aliens are real. The astronaut first replies with a simple “nope,” though a few frames later shows an alien exploding from the astronaut’s chest to reveal a different truth.

The tone is reminiscent of other publications that resemble kids’ books but are steeped in sarcasm for the adult set, such as Go the F*** to Sleep or It’s Just a Plant: A Children’s Story of Marijuana.

“It’s a children’s book for adults,” Schneider said. “It’s squarely aimed, I think, at younger parents with small children who have read Goodnight Moon, they’ve listened to Raffi and they’re listened to the Frozen soundtrack for the 100th time.”

How Chan got into publishing seven years ago smacks of irony. An advertising copywriter by day, Chan figured he’d give the publishing world a go through what he looked at as a popular, if not easy, route: a kids’ book.

That initial idea was to turn around a legitimate kids’ book filled with kid things. It didn’t take and Chan soon fell into a prolonged bout of writer’s block. Turning to his colleagues to help get over the hump, Chan was told simply to write — any topic at any time — to help him get back on track.

His topic of choice?

Lots of poems about passing wind came to be, so much so his first published offering was released in 2015 under the title Pfffffft: A Book of Illustrated Fart Literature.”

Heady stuff to be proud of, indeed.

“My parents are so confused about what I do,” Chan said. “If I didn’t confuse them enough when I told them I was in advertising, this really boggles their mind.”

Yet another layer of irony reveals itself in the person chosen to illustrate Chan’s current offering. At 51, Schneider has sired four offspring, earning him the designation of having “award-winning sperm” from his partner in publishing.

“When you have small children, you invariably read a lot of children’s books and they’re so ridiculous and simple,” Schneider said. “As a parent, it’s nice when a children’s book like this comes along and it’s written for you. It’s a nice juxtaposition to Goodnight Moon and all the other classics.”

On the surface, Schneider’s inclusion in a book that satirizes kids could put him in a tough spot. He’s a proud dad, who loves being a dad and loves his progeny.

He isn’t immune, however, to trolling the little buggers from time to time and doesn’t blame the childless among us for doing the same.

“I totally get it, especially at Pierre’s age,” Schneider said. “But I don’t know a single parent who would say it’s rainbows and unicorns the whole time, because it’s just not. You take the good with the bad. It’s rewarding and I like being a dad. But I get how some people just wouldn’t want to do that.”

The pair are in the midst of a crowdfunding campaign to raise the necessary funds to produce hard copies of the book, which will also be made available in a digital format.

Their initial goal of $3,000 has already been eclipsed, but getting more money will help reduce printing and bulk order costs.