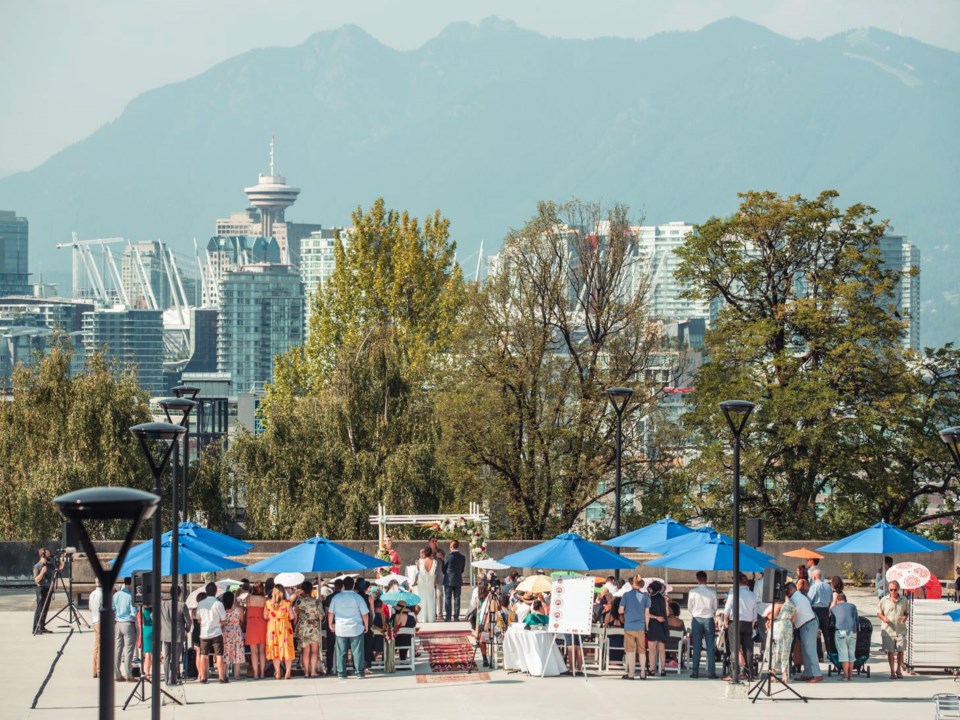 City hall’s Helena Gutteridge Plaza was the site of a wedding July 29 between Mira Oreck and Stepan Vdovine. Weddings are rare at city hall, with only two on record since 2003. Photo courtesy Nima Zadrafi

City councillor Melissa De Genova wants to set up a program at city hall that promotes affordable weddings for couples who want to get married on the grounds of the iconic building and perhaps even in the council chamber.

Because right now, the sacred union of two people in love is a rare occurrence at 12th Avenue and Cambie Street.

In fact, after consulting three former city councillors and the city’s communications department, the Courier was only able to identify two weddings that occurred at city hall in the past 15 years—one at the Helena Gutteridge Plaza in July, and one on the back steps of city hall in 2003.

Unlike other Canadian city halls where programs are set up for couples to easily access information and permits, Vancouver doesn’t have a system in place that either promotes weddings or makes it easy for people to get hitched.

De Genova wants to change that and follow the lead of the Vancouver Board of Parks and Recreation, which offers permits to couples to get married at various community centres and parks, including Stanley Park where De Genova was married.

“I know that in New York you can get married, in city halls across Canada you can—in fact, Victoria has a pilot program where they allow couples, on four days of the year, to come and get married,” said De Genova, who has prepared a motion for council’s Dec. 18 meeting to have city staff explore setting up a marriage program at city hall.

De Genova suggested the Helena Gutteridge Plaza, the garden on city hall’s north lawn and even the council chamber as potential sites to hold a wedding at city hall.

“At times, the chambers aren’t being used—so perhaps on a weekend,” she said, noting the goal isn’t to generate money for the city, but to make space available for weddings of different sizes at an affordable rate. “Most city hall weddings—in my research—were done for reasons of affordability, time management and ease. That’s not to say that we couldn’t have something more elaborate.”

In Victoria, wedding ceremonies occur in the council chamber, which rents for $150 for the hour. Couples are required to hire a marriage commissioner and obtain their own marriage licence.

At Ottawa city hall, couples can choose to get married on a weekday or weekend. Costs range from $141.30 for a weekday ceremony and $212 for weekends. A marriage licence costs $161.60 and ceremonies are offered in English and French.

In Toronto, there is a dedicated space for weddings that overlooks the council chamber. It costs $270 for a half hour and includes a “marriage officiant.” Ceremonies are performed Monday to Saturday, but the space can only accommodate about 30 guests.

De Genova, who was married by former Vancouver mayor Larry Campbell, said she doesn’t envision creating a wedding office or having the city conduct renovations to accommodate weddings. She suggested it would be more of an online system.

Such a system would have made wedding plans easier for Mira Oreck and Stepan Vdovine.

Back on July 29, Oreck and Vdovine got married at Helena Gutteridge Plaza, which officially opened as a public space in March. The plaza was named after Gutteridge, a political activist and the first woman elected to city council in 1937.

For years, Oreck and Vdovine were heavily involved with Vision Vancouver, the party that dominated city hall for a decade. The couple met during their work with the party and said that connection to municipal politics along with the plaza being named after Gutteridge was meaningful to them.

Oreck said she obtained a permit for $800 from the city’s film and special events group for their Sunday wedding, which included 200 guests and ran about five hours in the afternoon. A live band also played on the large plaza, which was created after an annex to city hall was demolished.

“I think, technically, one can get married almost anywhere but we wanted to actually set up structures and that’s where things get a bit more complicated,” said Oreck, noting it took some time to sort out which department at city hall to approach for a permit. “Is it the city? Is it parks? Is it film? Is it engineering? You can imagine what I went through. I know how to advocate, but it was an effort to get it.”

Added Oreck: “Once I found some people [at city hall] that were interested in this, they were very supportive because I actually think they want to make that space available. So they helped me make this happen.”

Oreck said city staff followed up with her this summer and asked for feedback on the use of the plaza. She sent photographs and told them a more widespread program for weddings would require some investment, “especially if you wanted more than the two of you and a witness.”

There was also the concern over lack of washrooms, which the couple had to rent.

In 2003, then-city councillor Tim Stevenson, also a longtime United Church minister, married a couple on the back steps of city hall as part of a ceremony to mark the anniversary of the Stonewall Riots in New York City in 1969.

“We had the steps all painted in a rainbow and it was wonderful,” Stevenson said.

Stevenson, nor former city councillors Raymond Louie or Ellen Woodsworth, could recall any other weddings at city hall other than the two identified by the Courier.

The city’s communications department only identified the wedding of Oreck and Vdovine, although there is an unconfirmed report that a ceremony may have taken place in the rotunda on city hall’s main floor.

De Genova’s motion comes four years after her now-retired colleague, George Affleck, introduced a motion to find a permanent home for “love locks” that city crews were removing from railings and other spots around the city.

At the time, Affleck described “love locks” as traditional padlocks that are attached to fences or railings by couples to symbolize their commitment to each other. Keys are thrown away once the locks are attached.

In September 2016, a public art piece designed to be covered in love locks was unveiled in Queen Elizabeth Park.

Asked whether the NPA has become “the romance party,” De Genova replied: “It’s about making sure that some of our motions are in looking at positive and fun aspects of our city, while prioritizing and addressing housing, homelessness and affordability.”