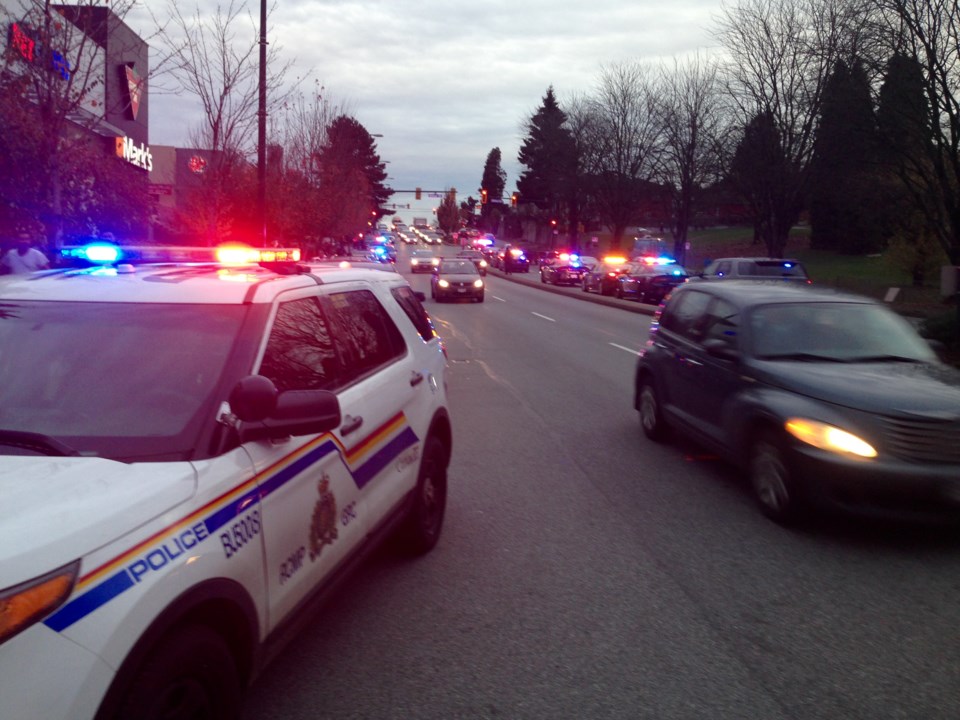 Dozens of police officers from the VPD and RCMP rushed Thursday to a shopping mall on Grandview Highway after a suspect stabbed a store clerk inside a Canadian Tire store. Police said the suspect also stabbed an officer. Police shot and killed the man at the scene. Photo Mike Howell

A Vancouver police officer and a Canadian Tire employee remained in hospital Friday with knife wounds after a man dressed in camouflage allegedly tried to steal guns from the store before being shot dead by police.

The officer, a five-year veteran, was stabbed multiple times, including in the head and abdomen. The 53-year-old store clerk was stabbed in the back and across the neck, according to a press release issued by the VPD Friday afternoon. Both victims are in stable condition.

An 82-year-old man, who was taken hostage by the suspect, was not injured in the incident, which unfolded shortly after 3 p.m. Thursday inside a Canadian Tire store in a shopping mall on Grandview Highway, near Renfrew Street.

Police said the suspect was 38 years old and originally from Alberta. He was residing in Vancouver. Police searched his home and found "concerning evidence of his possible criminal intentions, which will all be part of this ongoing investigation."

Police said the suspect entered the store dressed in camouflage gear, stabbed a store clerk and began removing firearms from gun cabinets. He then abandoned the weapons and began making his way to the exit as police received multiple 911 calls.

On his way out of the store into a rooftop parking lot, police said the suspect grabbed a customer, an 82-year-old man, and held him at knifepoint before being confronted by officers.

Witness Katarina Mitchell, who was about to go into a Starbucks across from the Canadian Tire, said she saw a man outside the store armed with a rifle. Mitchell said the man sprayed an officer with a long stream of an unknown substance, possibly bear or pepper spray.

Mitchell, 24, said one officer tackled the suspect and then she heard "pop, pop, pop," which she believed were gunshots. She said she never did see police shoot the suspect. Police have not said the suspect was armed with a rifle.

"It's hard to believe, you think you live here your whole life and it's safe, and then something like this happens," she told reporters outside one of the entrances to the mall.

Mitchell heard from another witness that there may have been a second suspect involved in the incident. But police said after reviewing video and speaking with witnesses that they were confident the suspect acted alone. Police Chief Adam Palmer took to Twitter Friday to comment on the incident, saying: "It's been a long 24 hours for @VancouverPD members -- I couldn't be prouder of the heroic actions of our officers!"

The strip of Grandview Highway in front of the mall was plugged with emergency vehicles for several hours after the shooting, with the incident attracting dozens of officers and more than 20 police cars, including some from the neighbouring Burnaby RCMP detachment. The Burnaby-Vancouver border is a couple of blocks from the scene.

The Independent Investigations Office, which investigates police-involved shootings, is now involved in the case. Police are seeking more witnesses, particularly those with video.