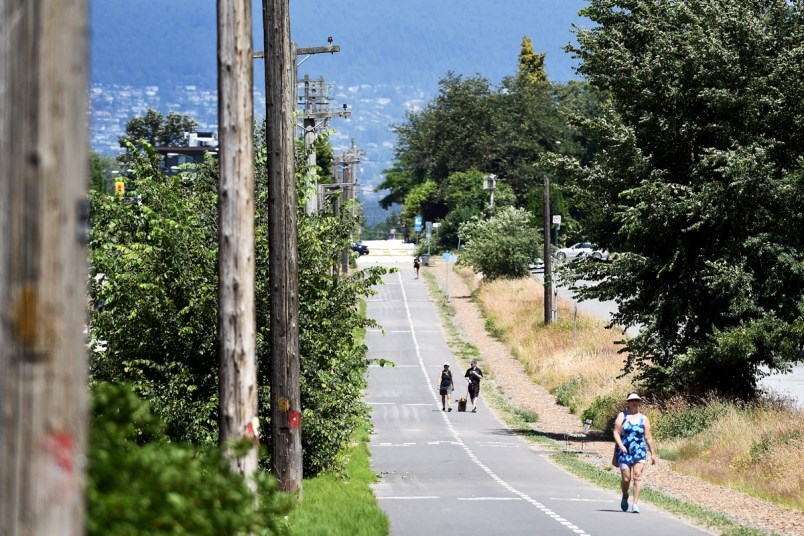 The implementation strategy includes developing two of the eight sections or “character zones” along the greenway to begin with — The Lookout (zone eight) and The Ridge (zone three) — northern and southern extensions to the Fraser River and False Creek, as well as short-term spot improvements on the temporary path.

Council’s decision comes just over two years after the City of Vancouver announced it bought the Arbutus corridor from CP for $55 million. It was purchased for use as a transportation corridor and as such will feature pedestrian and cycling paths. Space is also being allocated for a future street car.

Staff peg the first phase of the development of the greenway at $30 million. Details will be outlined for the next capital plan. If only partial funding is available, the first two zones could be partially developed, with the completion deferred to a future capital plan.

Buildout for the entire nine kilometre-long route is expected to take place over many years and at least four capital plans.

The staff report outlines a high-level design so council’s approval means they can move forward with more detailed design plans, which will include further public consultation.

Mayor Gregor Robertson said it’s a “great opportunity for us as a city to rally around a huge improvement” to Vancouver. He said while people had great expectations for the greenway, current use of the temporary path has “blown” those expectations away.

“It will be an incredible addition to the city in the years ahead,” he added.

Green Party Coun. Adriane Carr praised staff for their collaboration with the communities along the route and said she was pleased the overall greenway project is being dealt with in the spirit of and commitment to reconciliation.

City staff have been collaborating with the Musqueam, Squamish and Tsleil-Waututh First Nations on aspects such as naming, ethnobotany, wayfinding, storytelling and public art.

“It’s a very exciting piece of it,” Carr said, adding, “This is a neighbourhood asset and a city asset and a global asset. The way it’s developing is quite extraordinary.”

A handful of speakers spoke before council’s vote, a couple of whom raised concerns about potential congestion that could be created by design plans and programming along the corridor.

One group of residents who live next to zone two (Electric Alley), which runs between Broadway and West 16th, said design plans released in April weren’t in keeping with the character and needs of their community. But a representative told council that staff listened and scaled back plans for details such as overhead structures.

They remain concerned, however, that future development along the west side of the greenway in zone two could include a café.

Meanwhile, a woman speaking on behalf of residents living near zone one, which is known as Harvest Table, pointed out it’s one of the most densified and diverse areas along the greenway. She said the final report didn’t reflect residents’ concerns, which include their issues with the route of the future streetcar in zone one and noise that could be created by programming such as live events and food trucks.

Before voting in favour of the plan, Vision Coun. Heather Deal said she wants a “vibrant” greenway but acknowledged that the “right place” must be found for music and food trucks.

Maggie Buttle, senior project manager for the Arbutus Greenway, told the Courier the greenway team and entire engineering department were “extremely excited” to get council’s approval.

“The biggest thing for us is we had a number of speakers today who were extremely supportive of our engagement process and felt that they were heard and see their aspirations in our design,” she said.

Buttle said there will be consultation with residents adjacent to the route around concerns such as noise, lighting and programming as each zone is developed.

She called the $30-million figure for the first phase a “rough estimate.”

“At this stage, we’re at the conceptual level so it’s very high level. We haven’t done the detailed cost estimating so it’s hard to know how much these zones are going to cost. We just identified an envelope of investment,” Buttle said, adding the city will be seeking funding from senior levels of government.