Vancouver council to apologize for historical discrimination against Chinese 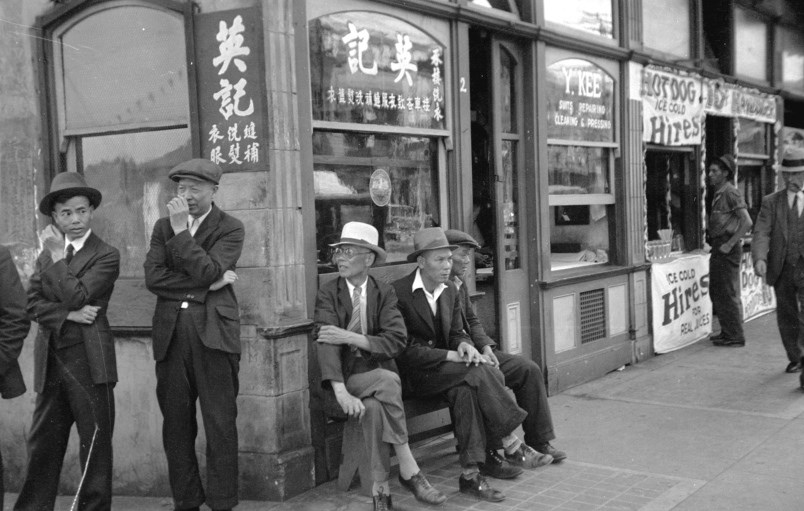 Vancouver city council has set April 22 as the date it will formally apologize to the Chinese community for previous councils’ legislated discrimination against Chinese people. Photo City of Vancouver Archives Bu N158.2

City council will hold a special meeting April 22 in Chinatown to make a formal apology to Chinese people for the legislated discrimination enacted decades ago by previous city councils.

The event at the Chinese Cultural Centre of Greater Vancouver comes after the 11-member council agreed unanimously in November 2017 to hold a ceremony to condemn the racist policies of city leaders in power between 1886 and 1947.

Banning voting rights, not allowing Chinese people to run for public office and lobbying for a head tax were among such policies.

“It will hopefully help close the door on a piece of history of our city that needed to be recognized as having happened,” said Vision Vancouver Coun. Raymond Louie, who will join Mayor Gregor Robertson in reading the apology at the centre on East Pender Street.

Louie and Robertson will both read sections in English, with former councillors Maggie Ip and Bill Yee expected to read the Chinese portion of the apology, which will be read in Cantonese and the Sze-Yup dialect.

Ip, a co-founder of United Chinese community Enrichment Services Society, served on council between 1993 and 1996.  Yee, a retired provincial court judge, was the first Chinese-Canadian elected to Vancouver council in 1982.

Asked about reading an apology from a government body that legislated injustice on his ancestors, Louie said “it’s not about me, directly, but more about the wider community and the wider message about racism and discrimination.”

A city staff report that went before council in November showed Vancouver councils of the past were directly responsible for decades of discrimination against Chinese people.

In 1886, the year the city was incorporated, council disqualified the Chinese from voting. At the time, Chinese people were also prohibited from becoming a lawyer, doctor, nurse or banker, among other professions.

No Chinese person could own property in some areas of the city, or run for public office. Since Yee was elected in 1982, several residents of Chinese descent were elected to council, including Louie’s Vision Vancouver colleague, Kerry Jang.

Jang’s view of the apology is it has to be done on behalf of the civic government but noted his grandparents, who arrived in Vancouver in 1895, had a different take on injustices they faced.

“They came over and faced discrimination and all the bad stuff we hear about,” he said. “But my grandmother, actually, was never for these types of apologies. None of them paid the head tax, but they said that if they had paid the head tax, we wouldn’t have even asked for the money back.”

That’s because, Jang continued, his grandmother said she was so grateful to be allowed to live in Canada—that if she and her husband stayed in China, they would have been killed by the Japanese, or died in the civil war or because of famine.

“For me, the apology is important for some people but, personally, not for my mom’s side or my dad’s side,” he said. “But I know it means different things to different people.”

Added Jang: “First and foremost, I’m a Canadian. And as part of being a Canadian, we all bear some of the collective guilt for all the wrongs we have done to everyone—whether it’s First Nations or whatever group you want to pick. So for me, it’s not awkward [to apologize]. ”

Over the years, other Chinese-Canadian city councillors have included Tung Chan, Daniel Lee, Jenny Kwan, Don Lee, George Chow, Tony Tang and Sandra Wilking, who became the first Chinese woman in B.C. elected to office. She served from 1988 to 1990.

Vancouver didn’t grant municipal voting rights to the Chinese until 1949, some four years after Canadian-born Chinese members of the Canadian Forces returned from the Second World War.

The city also repeatedly lobbied the federal government to pass discriminatory immigration policies, including adopting formal legislation to exclude the Chinese from immigrating to Canada.

"Anti-Asian political agitation and racial violence culminated in a big riot at Brighouse Estate near Coal Harbour in 1887 and again in Chinatown in 1907," the city staff report said. "These riots occurred with the knowledge and sometimes presence of the city mayor and aldermen. Other groups such as the Japanese were also targeted during these riots."

The cultural centre in Chinatown has a capacity of 500 people. The special council meeting begins at 2 p.m. The event will coincide with Chinatown “cultural day,” which runs from 1 to 4 p.m. at various locations in the historic community.