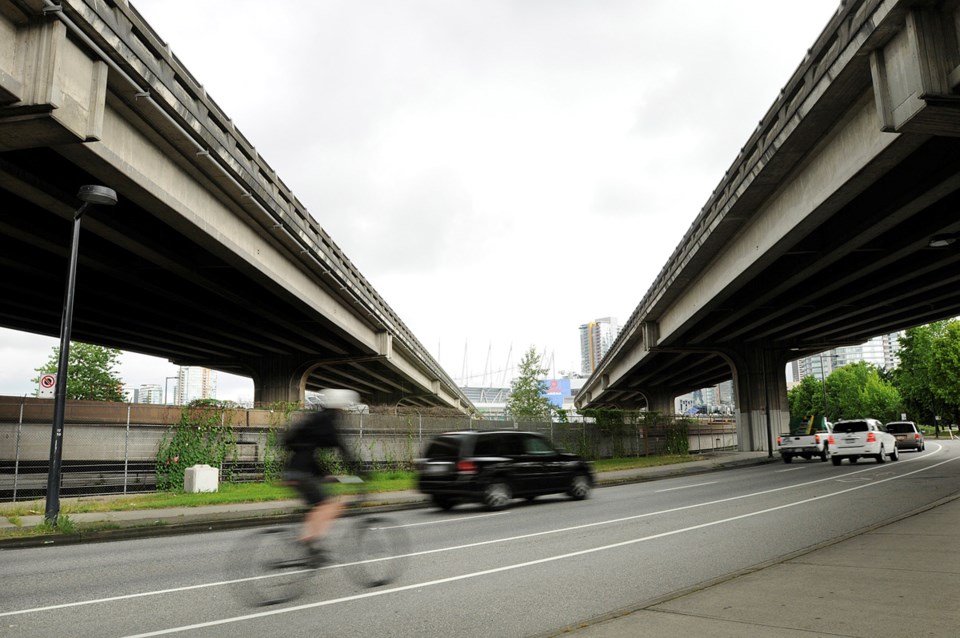 The Georgia and Dunsmuir viaducts will be replaced by a new road network that will include a two-way Georgia Street that slopes down to Pacific Boulevard. Photo Dan Toulgoet

The Georgia and Dunsmuir viaducts are coming down.

In a 5-4 vote Tuesday night, the ruling Vision Vancouver council agreed with a staff recommendation to proceed with a $200-million plan to demolish the elevated roadways that have served as a link from Chinatown and Strathcona to downtown since the 1970s.

"We're basically trading an aging piece of infrastructure that's under-used from a past century — a relic of a failed transportation policy — for an improved road network that can serve a dense new Northeast False Creek neighbourhood and connect the downtown and Chinatown and other neighbourhoods to False Creek," said Mayor Gregor Robertson after hearing from more than 50 people over two days who largely supported the plan to tear down the viaducts.

Robertson credited Vision Coun. Geoff Meggs for leading the charge to remove the viaducts, a move supported by Vision councillors Tim Stevenson, Heather Deal and Raymond Louie. The vote, which occurred without Vision councillors Andrea Reimer and Kerry Jang present, has a place in the city's history books since it overturns a decision made a century ago to build the original Georgia viaduct in 1915 before it was replaced with the existing structures.

"It's important to keep in mind that the decision we make today could turn the page on a really long chapter in Vancouver's history and spell the end of the freeway battle that defined the city in the 1970s," Meggs said.

The decision came despite opposition from Green Party Coun. Adriane Carr and the three NPA councillors — Elizabeth Ball, Melissa De Genova and George Affleck, who cited concerns about costs, increased traffic, the delivery of a long-awaited park and unknown benefits to landowners.

"I actually think we're creating a highway right through the middle of a park, and I think that's a real problem," said Affleck, noting he lives in Yaletown with young children. "The kind of traffic that we're going to be seeing in this neighbourhood on the other side of False Creek is a real concern to me."

Robertson and his Vision councillors pointed to suggestions from speakers and benefits outlined in a city staff report as reasons to free up the large swath of land under the viaducts. Some of the speakers represented the black community and urged council to commemorate the history of Hogan's Alley while others cautioned politicians not to turn the land into a forest of expensive highrises.

There were suggestions that a First Nations longhouse be built and that any future arterial routes constructed to alleviate traffic changes from removal of the viaducts exclude Malkin Avenue so to preserve community gardens that exist on the avenue's right-of-way.

The benefits identified in the staff report include:

• Accelerating the construction of a long-awaited extension of Creekside Park, now promised to cover 13 acres of vacant asphalt that stretches along the seawall from Science World.

• Creating up to 300 units of "affordable housing" on the city-owned blocks that straddle Main Street and examine ways to pay tribute to the historic neighbourhood of Hogan's Alley.

• Reconnecting the historic communities of Chinatown, Gastown, Strathcona, Thornton Park, Victory Square and the Oppenheimer district to the waterfront, which will include a reconstructed seawall.

• The construction of an elevated pathway to accommodate cyclists and pedestrians on the downtown side at Dunsmuir Street and connect to Creekside Park.

Council's vote was based on a plan recommended by city staff that said the viaducts need up to $65 million in repairs to keep them standing after a moderate earthquake. Traffic counts also showed the viaducts are underutilized — even at "45,000 person trips by vehicle over a 24-hour period" — and used at less than half of their designed capacity.

Key to the development of a new neighbourhood will be a road network anchored by a four-lane, two-way section of Georgia Street known as "the Georgia ramp" that will slope down and pass between Rogers Arena and B.C. Place Stadium, over top of Expo Boulevard, to a six-lane Pacific Boulevard.

Jerry Dobrovolny, the city's head of engineering, said the road network will allow for 10 per cent more capacity for vehicles but will slow traffic by one to three minutes. Unlike the viaducts, Dobrovolny said, the network will provide a variety of routes into and out of downtown and accommodate future development.

Despite fears of residents living in Strathcona and other east side neighbourhoods that traffic will increase on their streets, Dobrovolny said the impact will be "none." He cited studies that showed a large number of vehicles that use the viaducts originate from the Boundary Road corridor and Tri-Cities.

With the Evergreen Skytrain line from Coquitlam to Commercial Drive expected to open next year, along with the addition of B-line buses along Hastings, Dobrovolny said those transit improvements should see more people choosing to leave their vehicles at home.

"The modeling has shown that there will be no spillover effects on the neighbouring neighbourhoods," he said, noting staff is studying the possibility that Malkin or National streets will be converted into a major arterial road to alleviate vehicle traffic on Prior and Venables.

Retired City of Vancouver engineer Ian Adam has long disputed the city's claims about a replacement road network being more efficient than the viaducts.

"Anybody who thinks you can take down two major viaducts like that, which handles 60,000 people a day and a thousand heavy trucks a day — and not have some impact — they've got to be dreaming in Technicolor," he told the Courier in August.

Adam since wrote a letter to council in advance of Tuesday's vote, outlining a list of concerns in which he predicted congestion, increases in greenhouse gas emissions, delays with people and goods reaching downtown and Pacific Boulevard turned into "a quasi-freeway."

"The proponents seem to see only the information they want to see, and any mention of negative issues is immediately dismissed," he wrote.

Brian Jackson, the city's head planner, said it was important for council to make a decision now to avoid mounting costs in the future. As a former Toronto planner managing that city's waterfront, Jackson said Toronto waited until it was too late to consider demolishing the Gardiner Expressway.

"If it's not done now before the Concord lands are developed, and before the park is delivered, the options for removal of the viaducts will either be gone or become that much more expensive and more complicated," he told council.

The issues related to removal of the viaducts are complex. They involve negotiations with landowners, including Concord Pacific, and the provincial government. Concord purchased the former Expo 86 properties in 1988 from the government and will see its land increase in value once the lands are reconfigured.

The city anticipates the project will be paid for with development-related revenues, the sale or lease of lands, senior government contributions and "other strategic partnerships." The city expects it will generate a surplus of $100 million once the project is finalized. The city's staff report says the entire project, including building a new street network, housing, amenities and developing the park, could take until 2025 to complete.