Vancouver craft breweries could be forced from communities they helped create 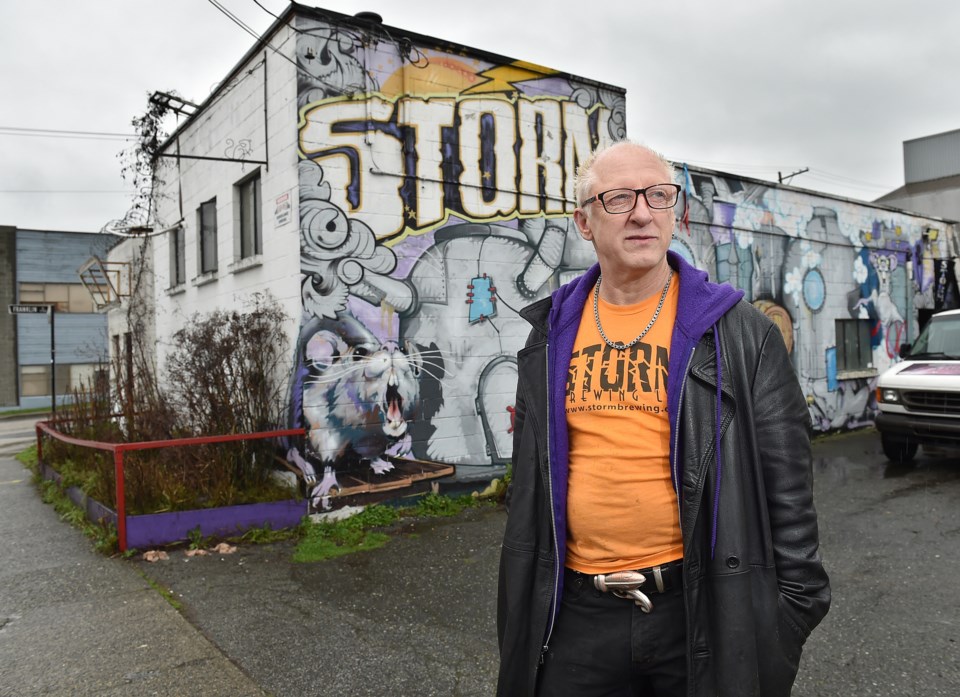 Storm Brewing’s James Walton says the future of the iconic craft brewery is uncertain after its lease expires next year. Photo Dan Toulgoet

Do you remember what Vancouver’s much-loved Yeast Van brewery district was like, before all the breweries moved in?

In a word, it was stabby.

Twenty years ago, the run-down industrial area was replete with vacant buildings and empty storefronts. Thanks to an animal waste processing plant and a chicken slaughterhouse, it didn’t smell too nice, either.

It was not a particularly pleasant place to be.

“Needles and condoms everywhere” is how James Walton remembers it. The owner and brewer at East Van’s iconic Storm Brewing moved into his Commercial Drive location in 1994, well before the current crop of craft breweries took root. “I used to get broken into every six months, pretty regularly.”

But that changed, and breweries looking for light industrial-zoned space in which to set up shop were a big part of that change. Breweries brought foot traffic back to the neighbourhood. Instead of merely serving as a conduit for commuters travelling in and out of downtown, Powell Street became a destination for locals and tourists alike. The streets were no longer creepily vacant after 6 p.m., and so they became safer, and the neighbourhood became desirable.

Today, the area is home to 12 craft breweries, two distilleries, coffee roasters, ice cream shops, music studios, trendy restaurants and grocery stores. And, of course, condos that advertise themselves as being in the heart of the city’s brewery district.

But thanks to the two-headed hydra of rising taxes and runaway real estate speculation, the very breweries that helped create Yeast Van may be forced out of it.

Walton is looking at the very real possibility that his lease won’t be renewed when it expires next year. As a result, he’s on the lookout for a new home for Storm, but he’s not finding much.

“It’s pretty depressing,” he says. “We’re looking at paying at least double for a similar space.”

But in order to justify that expense, he’ll have to expand his brewery, start packaging his product and put in a tasting room. That means more equipment, more space and a more expensive location.

When all is said and done, he estimates that he could be spending upwards of four times as much as he is now — assuming he can even raise the investment necessary to build such an expansion.

If he can’t, it may be the end for one of the most important, pioneering breweries in B.C.’s craft beer scene.

Making matters worse, has been a corresponding increase in property taxes. And since many small businesses, including most breweries in Vancouver, are on “triple-net” leases, they are responsible for paying not only the monthly rent, but the property taxes and maintenance, too.

Property taxes are determined by assessing a property’s “highest and best use,” so when areas of the city are rezoned to allow for different uses — such as mixed use residential as is the case in much of Vancouver’s industrial-zoned land — suddenly that theoretical highest and best use is a lot more valuable and property taxes skyrocket.

According to B.C. Assessment, property values for light industrial land in Vancouver increased 36.5 per cent in 2018. As a result, property taxes on the building Storm leases have jumped by nearly 30 per cent in the past year alone.

“Taxes have gone up massively in the past five years,” says Walton. “And the city has been no help.”

While the reasoning for taxing properties at their highest and best use is to encourage property owners to redevelop their land, under triple-net leases, owners aren’t paying the taxes, the businesses are. Yet the services the businesses receive from the city haven’t changed.

Just a short walk away, Callister Brewing is facing a similar conundrum.

Owner Chris Lay recently renegotiated a five-year extension on his lease that included a 60 per cent increase. But it could have been worse.

As a result of the neighbourhood becoming desirable, there are fewer commercial properties available, which drive up prices. That shortage is further exacerbated by rampant speculation, as some landlords are opting to leave their properties vacant, according to Lay.

“It used to be a selling feature to have a tenant in your commercial building, but now, thanks to speculation, it’s a liability if they want to redevelop,” he says. “Properties are literally worth more as a hole in the ground than as a standing building.”

Because of the increase in property values and taxes, Lay has had to completely rewrite his business plan.

“In the past five years, all the gains we’ve made growing our business have now all been wiped out,” he says. “I don’t what we’ll do in five years when our lease is up. That’s a lot to take for any small business.”

Lay says he’d like to see the City of Vancouver step up and help small businesses who are finding themselves being priced out of the neighbourhoods they helped create, perhaps with a grant program to offset the increase in property taxes. If the city doesn’t take action, the result could be a mass exodus of small businesses, craft breweries included.

“All of us are in the same position,” he says.