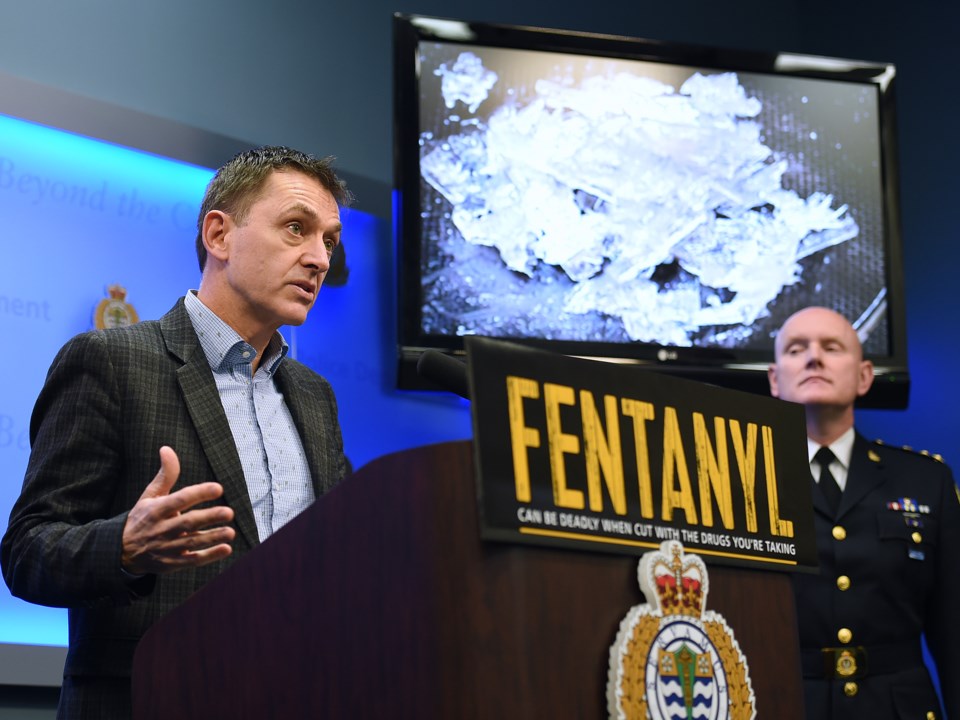 Dr. Mark Tyndall, pictured here in 2016 at the Cambie Street precinct of the Vancouver Police Department, has been among doctors, police and politicians warning people of the dangers of fentanyl use. Photo Dan Toulgoet

New research from the B.C. Centre for Disease Control that suggests people are knowingly using fentanyl in B.C. is not surprising news for the president of the Vancouver Area Network of Drug Users.

Lorna Bird, who is in recovery from a heroin addiction, said the reason behind drug users’ preference for the potent synthetic opioid is simple: the high is better than heroin.

“A lot of people don’t even want the heroin anymore, they’d rather have the fentanyl — they get higher,” Bird told the Courier by telephone Monday from the VANDU office on East Hastings.

Bird then passed the phone to a 39-year-old woman named Delilah, a heroin user for 16 years, who said she continues to buy heroin but knows it can be laced with fentanyl.

“It’s stronger, and it helps,” she said, adding that she’s overdosed a couple of times, but believes she’s developed a tolerance for the drugs.

“It’s dangerous, but [the dealers] usually let us know. We just do a little amount of it, that’s all.”

Delilah’s experience and the findings of the new research is in contrast to government, health agency and police campaigns that say fentanyl the size of a grain of salt can kill a person.

The B.C. Centre for Disease Control study, which was released Jan. 24 and published in the International Journal of Drug Policy, concluded researchers don’t fully understand the factors that contribute to people knowingly taking fentanyl.

"Providing a definite explanation for the dynamics and reasons behind using fentanyl knowingly is challenging," the study said.

"Some explanations propose both supply-led and demand-led factors to be at play."

Delilah’s insight about tolerance and Bird’s assessment about preference are in line with some of the study’s findings, with another factor being the drug’s widespread availability in the street drug supply.

The study’s lead author, Mohammad Karamouzian, a PhD student at the University of B.C.’s School of Population and Public Health, said he was shocked by the number of users saying they knowingly used fentanyl.

“Before we got the results, we honestly didn’t expect this,” Karamouzian said.

“The general narrative is that most exposure to fentanyl is unintentional, people don’t know what’s in their drugs. All of our public education campaigns and messaging has been ‘be careful, there’s fentanyl out there.’”

The study drew on data collected from 303 drug users recruited from 27 harm reduction sites in B.C., including Vancouver. Each participant completed a brief survey and provided a urine sample that researchers tested for fentanyl and other substances.

Sixty per cent of users had fentanyl detected in their urine. Of those people, 64 per cent knew they had taken fentanyl. A similar study in 2015 found 29 per cent of participants tested positive for fentanyl, with only 27 per cent aware they’d use the drug.

The overdose death crisis in B.C., which has claimed more than 4,800 lives since the beginning of 2016, has been linked largely to fentanyl, which doctors say is 50 to 100 times more powerful than morphine.

The B.C. Coroners Service’s most recent data indicated 85 per cent of deaths between January and October 2019 involved fentanyl alone, or in combination with other substances.

Sgt. Aaron Roed, a Vancouver police media relations officer, said he hadn’t read the study from the B.C. Centre for Disease Control. But Roed noted the department will continue its campaign to warn users about the dangers of fentanyl.

“Someone who is not using it and does comes into contact with it and ingests, touches, absorbs fentanyl in some way, it could have life-threatening consequences for that person,” Roed said.

A Vancouver police report on the opioid crisis posted to the department’s website in December 2019 said seven officers were exposed to opioids and four required the overdose-reversing drug, naloxone, be administered.

For drug users, Roed encouraged them to fully understand the make-up of the drugs they are using, and to use with another person present, preferably in an injection site to lessen the risk of overdose.

Police Chief Adam Palmer, doctors, politicians and firefighters have warned the public in various campaigns since 2014 about the dangers of fentanyl use.

Police first detected fentanyl at the Insite injection site in the fall of 2014, when an unusually high number of people overdosed. Overdose deaths increased from 368 that year to 1,542 in 2018, the last year for most recent data.

Dr. Jane Buxton, an epidemiologist and harm reduction lead at the B.C. Centre for Disease Control, said in a news release last week that making users aware of the presence of fentanyl in the drug supply “isn’t enough.”

“We need harm reduction services, substance use treatment, overdose prevention resources and pharmaceutical alternatives to the toxic drug supply to reduce the devastating impact of fentanyl and its analogues on our communities,” she said.