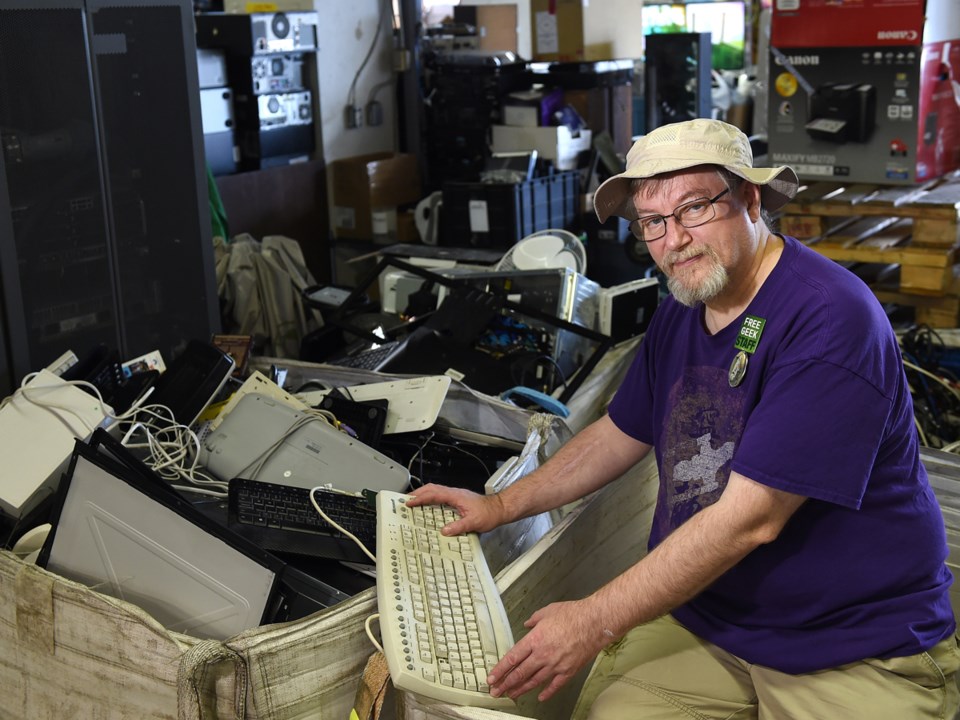 Over the last 13 years, Free Geek Vancouver has helped divert more than 780 tons of electronic waste from landfills, rebuilt more than 4,200 computers and trained more than 9,700 volunteers. But operations manager Robert Pilkington says the non-profit organization is at risk of closing this summer. Photo Dan Toulgoet

An East Vancouver-based non-profit organization dedicated to reusing and recycling unwanted computers and electronics is in danger of closing its doors this summer.

Free Geek Vancouver this week issued a plea for donations to help keep the operation open for the time being.

Established in 2006, Free Geek Vancouver takes in donated electronics — desktop computers, laptops, tablets and cellphones. Anything that can be reused is refurbished by trained volunteers and then sold in the thrift store, or donated to local non-profits. Anything that cannot be reused is recycled in an environmentally conscious way, saving electronics from the landfill or agencies using hazardous methods to reclaim metals.

In addition to providing free or low-cost electronics, Free Geek provides a weekly Open Help Night where people who might not be able to otherwise afford it can access computer technical support by donation.

Free Geek also runs a volunteer program that gives people from all walks of life the opportunity to learn technical skills at their own pace and make social connections.

The organization’s primary goal is to give electronics that might have typically gone to the landfill a second life and, over the last 13 years, Free Geek Vancouver has helped divert more than 780 tons of electronic waste from landfills, rebuilt more than 4,200 computers and trained more than 9,700 volunteers.

In recent months, however, Free Geek has found itself running in the red, wondering how much longer they will be able to keep paying staff.

“It’s not a good place to be for a non-profit,” said operations manager Robert Pilkington.

He said most of the organization’s revenue has come from selling recycled material from those computers and other electronics that cannot be reused.

Free Geek, like many organizations and municipalities in Canada, is feeling the pinch following China’s new rules that ban, or seriously restrict, foreign waste.

Pilkington said Free Geek is looking into other revenue streams, recently striking up a partnership with the City of Vancouver, but is in need of donations to help keep the doors open in the meantime.

Additionally, Free Geek is on the lookout for a second-hand three-ton truck that can be used to for pickups. The organization currently pays to rent a truck when needed.

Free Geek Vancouver is one of several autonomous Free Geek organizations around the world. The original Free Geek was established in Portland, OR in 2000.

For more information, or to make a donation, visit freegeekvancouver.org.