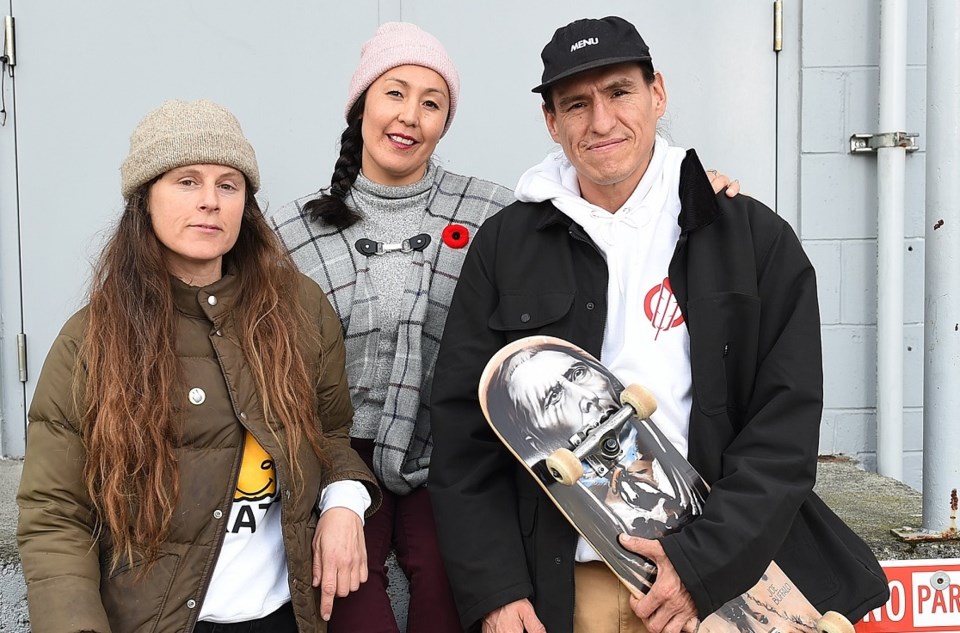 Despite its many social, physical and mental benefits, the sands of time have revealed some ugly truths in skateboard culture.

Rampant drug abuse and alcoholism, trouble with the law and a total disregard for mental and physical health were cool.

See the Jackass phenomenon for proof. More locally, the Whiskey skateboard videos from the 1990s were case studies in complete debauchery.

Vancouver’s Joe Buffalo is proof positive of that point.

Buffalo is two years removed from overdosing three times in one summer.

“There were times where I’d get woken up in a bathroom, I’d be high and nod off and someone would come in and say, ‘Are you OK?’” Buffalo recalled. “The next one was going to be too late. I didn’t want to be a statistic.”

Buffalo, 43, is now a pro skater and actor. He’s one of a handful of featured speakers who will present at a Vancouver Skateboard Coalition (VSBC) event called All Aboard, a two-day celebration of skateboarding culture running Nov. 16 and 17 on Granville Island.

Buffalo is one of five panellists taking part in a discussion called SWITCH, short for Skateboarding With the Intent to Change. He’ll be flanked by members of the LGBTQ community, educators, youth mentors and counsellors.

It’s a stark departure for a culture that once celebrated skaters breaking beer bottles over one another’s heads or lighting firecrackers in orifices.

“Selling that as an image to the kids is probably the stupidest thing ever,” Buffalo said. “They’re barely figuring out the birds and the bees and how to budget money. Throw 40s and blunts in the mix, they’ll get distanced from skateboarding.”

Rose Archie will curate the panel discussion and, like Buffalo, comes from a small First Nations reserve. They both share stories of isolation, carving their own destinies and how skateboarding changed their lives.

“Growing up, I never had a chance to look up to anyone,” said Archie, 37. “Getting magazines and seeing videos, it was few and far between. Young girls growing up now can look up to a whole bunch of athletes who are getting paid to do what they love.”

And while heady topics such as mental health and addiction will enter the fray over two days, so too will politics. Specifically, Vancouver’s need for a covered skatepark.

With the recent closure of SBC Restaurant, there’s now one covered, indoor park in all of Metro Vancouver that’s located in Tsawwassen. The Plaza, located under the Georgia and Dunsmuir viaducts on Quebec Street, offers some overhead cover, but not much.

Skies opening up for months on end during the fall and winter also puts a formidable kink in the plans for most new skaters, according to VSBC vice president Michelle Pezel.

Pezel recalls a specific example where a kid’s board goes away in September, and once spring rolls in, that same kid is busy with soccer or other activities.

“As skateboarders for 20 and 30 years, we know how to navigate through finding places to skate,” Pezel said. “But when you’re six, and whoever’s taking care of you doesn’t understand skateboarding, where do you go? There’s nowhere to grow that enthusiasm.”

A co-owner of Antisocial Skateboard Shop, Pezel admits that the coalition doesn’t really have a business plan, potential location or funding streams for a covered park.

That’s not by accident.

Pezel said the turnover at the park board and on council every four years makes getting sympathetic ears a tough go. Couple that changing of the guard with the rapidly disappearing industrial space in Vancouver and skaters are quite literally left out in the cold.

It’s for that reason that everyone involved hopes huge numbers show up to the Granville Island event — if nothing else, it shows politicians that the critical mass is there.

All Aboard kicks off at 10 a.m. Saturday, Nov. 16 and will include free lessons and demos for all ages and abilities. For info, see https://www.vancouverskateboardcoalition.ca/all-aboard.