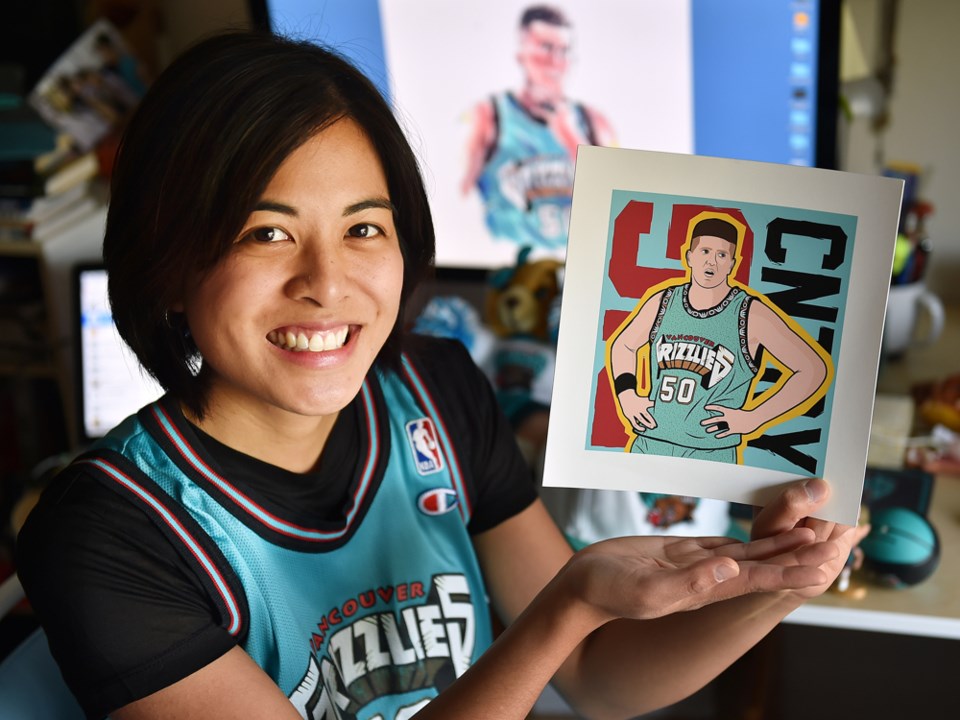 Kat Jayme, writer and director of the film Finding Big Country, with some of her memorabilia from the Vancouver Grizzlies’ six-year run in town.Dan Toulgoet

They’re considered by many to be the holy trinity of Vancouver sporting disasters, players with seemingly unlimited potential in their youth who then flamed out spectacularly once they reached the big leagues.

A life-long Vancouver Grizzlies fan and Big Country devotee from day one, Jayme has spent the last three years looking for the elusive Arkansas giant who appeared to have dropped off the face of the Earth after his retirement from the NBA in 2001.

“I think we had a legend in our backyard,” Jayme told the Courier. “I didn’t understand that at the time, but after doing my research and making this film, his legacy became clearer to me.”

On the surface, a 12.5 points-per-game career average does not scream “legend,” particularly given Reeves’ standing as a two-time Big Eight Player of the Year in college. It’s the same story for Nedved, who put up 145 points in his final year of major junior and only 124 points in his three years in Vancouver.

As for Tallon, a second-overall draft pick in 1970, he’ll forever be dogged by Hall of Famer Gilbert Perreault’s legendary career with the Buffalo Sabres that saw him amass 1,326 points.

All of that’s an aside for Jayme, and her love for the seven-footer goes beyond boards and dimes.

Just seven when the Grizzlies moved to town in 1995, Reeves is emblematic of Jayme’s childhood. Her dad and grandfather took her to boatloads of games while the team was in town and Reeves was the guy who always stuck out.

“He was the biggest guy out there,” Jayme recalled. “I knew he was our franchise player and his nickname was hard to forget. As a kid, he was the one that always stood out the most to me.”

The Grizzlies’ woeful six-year run in Vancouver ended in 2001, the same year Reeves retired from pro ball. Fourteen years later and armed with a UBC education in film, Jayme began her search. She spoke to beat reporters who covered the Grizzlies, former team employees and ex-club general manager Stu Jackson.

She didn’t get so much as a whiff of his whereabouts from any of them.

“That’s when I found that no one has found Big Country — there’s no trace of him online,” Jayme said. “When I talked to reporters, I was told he was considered the holy grail of interviews in Vancouver, so I made it my life’s mission to find him.”

Predictably, Jayme is mum on the film’s outcome. She won’t say if the title rings true or if she travelled to Reeves’ home — at least according to Wikipedia — in small town Oklahoma.

All that is secondary in Jayme’s mind, anyway.

Advance tickets are sold out for both screenings of Finding Big Country on Sept. 30 and Oct. 8, though some remain for the Oct. 10 show the Vancouver Playhouse.