Vancouver goes Green on council, school and park board 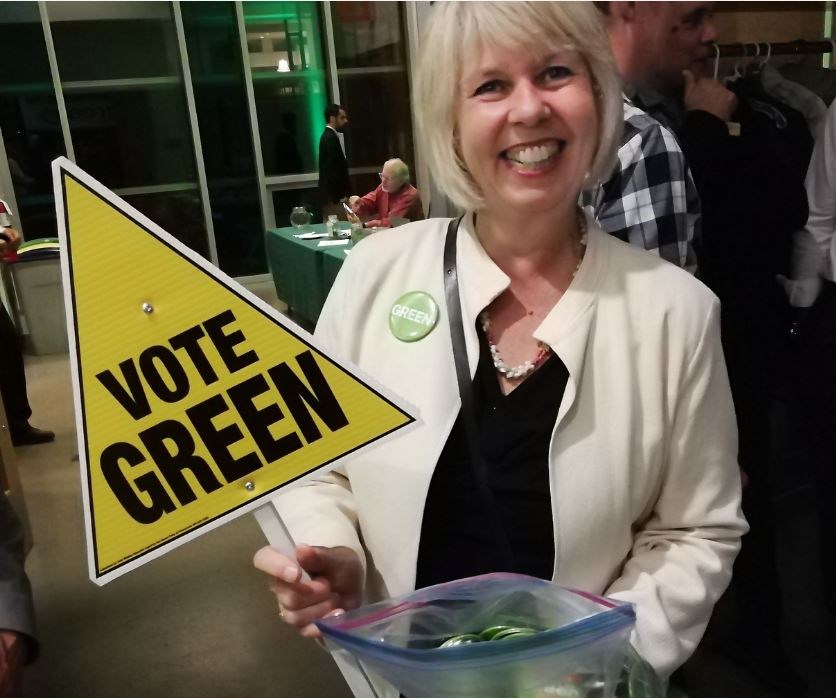 The Greens' re-elected councillor Adriane Carr was all smiles Saturday night. Once again she received the most votes of any candidate running in the election. Photo Roby Kruyt

So said Green Party incumbent Coun. Adriane Carr who was elected for a third term in office Oct. 20 along with eight other Green candidates — Pete Fry and Michael Wiebe, also on council; Janet Fraser, Estrellita Gonzalez and Lois Chan-Pedley on school board; and Dave Demers, Stuart Mackinnon and Camil Dumont on park board. Only one Green candidate seeking office failed to win a seat, David Wong on council.

Although Carr had hoped Wong would sneak into the last spot on council, she was nonetheless exuberant about the party’s overall performance — many of the Greens' candidates topped the polls, including Carr and Fry — even though the party won’t hold a majority.

Over the past seven years, the party has slowly grown into a political force. In the 2011 election, Carr narrowly won the last spot on council with 48,648 votes, beating COPE’s Ellen Woodsworth by only 90 votes.

Now, with three Greens on council she is in celebration mode.

That was clear when she spoke to supporters election night.

“My friends, I’m not going to be alone on council anymore,” she said, calling it a “change election,” which would bring a new era of Green and progressive politics in Vancouver.

She shared similar comments in an interview with the Courier earlier in the evening after she, Fry and Wiebe were declared winners.

“I am so thrilled, you can’t imagine. I’ve been wanting this. For the last term it’s been difficult, at times, to be the lone Green councillor,” she said.

For this election Carr said the Greens had a “fabulous slate of candidates.”

“I think we really garnered the trust of Vancouver voters. I am so honoured by that. It’s a huge responsibility that we’re going to take seriously as we move forward — listening to people, public interest first, really working collaboratively with other people that are elected to solve big problems [such as] housing affordability, homelessness, climate change action at the local level,” she said.

Carr believes the Greens will be able to work with councillors from the other parties, who include five from the NPA, one from COPE and one from OneCity, as well as with the newly elected mayor, Kennedy Stewart who ran as an independent.

Carr noted that when she was first elected in 2011, NPA Coun. Elizabeth Ball showed “incredible generosity” by promising to second Carr’s motions so they could be debated even if Ball didn’t ultimately vote in favour of them.

Carr had considered running for mayor but decided last summer the field was too crowded on the centre-left. She also failed to get support from COPE, OneCity and Vision Vancouver for a mayoral run.

The Greens didn’t endorse any mayoral candidates based on its position that if its candidates were elected to council they would work across party lines.

Fry, meanwhile, who earned the second highest number of votes on council after Carr, said the election results were a validation of a lot of the Greens’ ideals.

“I think that we represent a stability and I think it’s what Vancouverites have been looking for,” he said. “There’s been a lot of distrust among citizens about politics and we do politics differently. We’re quite genuine in our approach to that and I think they picked that up.”

Early in the evening, Fry was optimistic. He told the Courier that two of the party's six values are for participatory democracy and diversity.

"To us that means we need to cede a majority. Absolute control is not good for government."

Fry said the Greens want to work on consensus and they believe they did that already on the park and school board.

"People are hopeful about the Greens because they think we're the glue that can bind a possibly very fractured council. They see us as a party that's successfully worked with other parties and interests and engaged them," he said.

Once most but not all election results were known, and three Greens were elected to council, Fry acknowledged there will be more pressure to perform but he thinks they will rise to that challenge.

"Hopefully, with the right kind of makeup on council, we’ll see a different way of doing things,” he said.