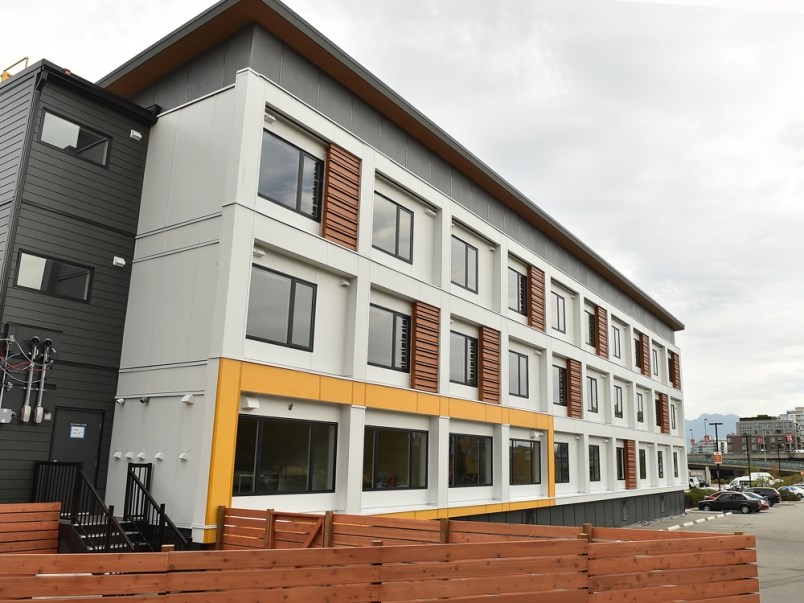 Vancouver city council wants another 600 units of temporary modular housing in the city, but funding is still needed. The mayor will be writing to the province requesting the money. Photo Dan Toulgoet

Vancouver city staff will be on the hunt for more temporary modular housing sites.

On Dec. 12, council unanimously approved a motion by COPE Coun. Jean Swanson directing staff to find sites for 600 more modular housing units for people who are homeless, and to report back in January of 2019. Mayor Kennedy Stewart will also write a letter, on behalf of council, to the minister responsible for BC Housing to request funding for at least an additional 600 units of housing, including modular, in 2019.

Just over 600 units have already been approved on 10 sites across Vancouver thanks to $66 million in funding from the provincial government that was announced in 2017. Seven complexes, featuring a total of 404 homes, are completed, a 98-unit complex is nearing completion, and two, which will create another 101 homes, are under construction and are expected to be completed in early 2019.

Homelessness is a growing problem.

In the spring of 2018, 2,181 people were counted in the city’s annual homeless count — the highest number recorded since the count started.

City manager Sadhu Johnston told council on Wednesday that it took more than a year to find all 10 sites for the first 600-plus units, but the city has some unused sites remaining on its list.

The approved motion will also see staff raise with BC Housing the idea that any new modular housing must make accommodation for family units — existing units are for singles — and that Indigenous women’s specific needs for safe housing be a priority.

Furthermore, city staff will communicate to BC Housing that women must be better represented in all modular housing buildings, with specific needs for safety and women’s leadership taken into account.

The motion’s final clause states that all levels of government must ensure that women, specifically Indigenous women, are prioritized in placement into modular housing units, and that operators of all modular housing complexes have “an intersectional gender strategy in place that keeps women safe and housed.”

There was some debate about adding the word “supportive” to the word “housing” in the motion, but that didn’t happen. Swanson told the Courier that a lot of Downtown Eastside residents say that supportive housing is too institutional and prison-like.

“They don’t like people coming into their rooms unannounced or having to rely on untrained staff for their meds or having their visitors restricted,” Swanson wrote in an email. “…I'm not saying it’s all bad just that there should be more options and different forms of management that are more tenant-centred.”

Fiona York, coordinator for the Carnegie Community Action Project (CCAP), spoke in conditional support of the motion before the vote.

She said CCAP welcomes modular housing as an interim measure to house the homeless, but the organization continues to call for permanent housing -- she said the city is not building nearly enough of it.  York said CCAP doesn’t want to see residents “languishing in temporary housing.”

Len Guenther, another speaker, spoke in favour of the motion as well, pointing out former Mayor Gregor Robertson promised to end homelessness but it instead increased under his watch. Guenther echoed York’s point that not enough affordable housing is being built.

He added that homeless people often exist in the abstract for people -- as a category of “the homeless” rather than as individuals, which is costing society.

One in four homeless people are women, one in four is a senior and one in five is a young person, according to Guenther.

“Anyone can end up without a home,” he said, while pointing out that, in Vancouver, homelessness is especially likely to strike those with a mental illness, and that LGBTQ and Indigenous people are overrepresented in the homeless population.

“Having a home restores a sense of worth and a sense of self-confidence,” he said.