Daryl Nelson complained to Vancouver Police Board about mayhem outside his doors at Patricia Hotel on East Hastings
Jul 18, 2019 10:02 PM By: Mike Howell 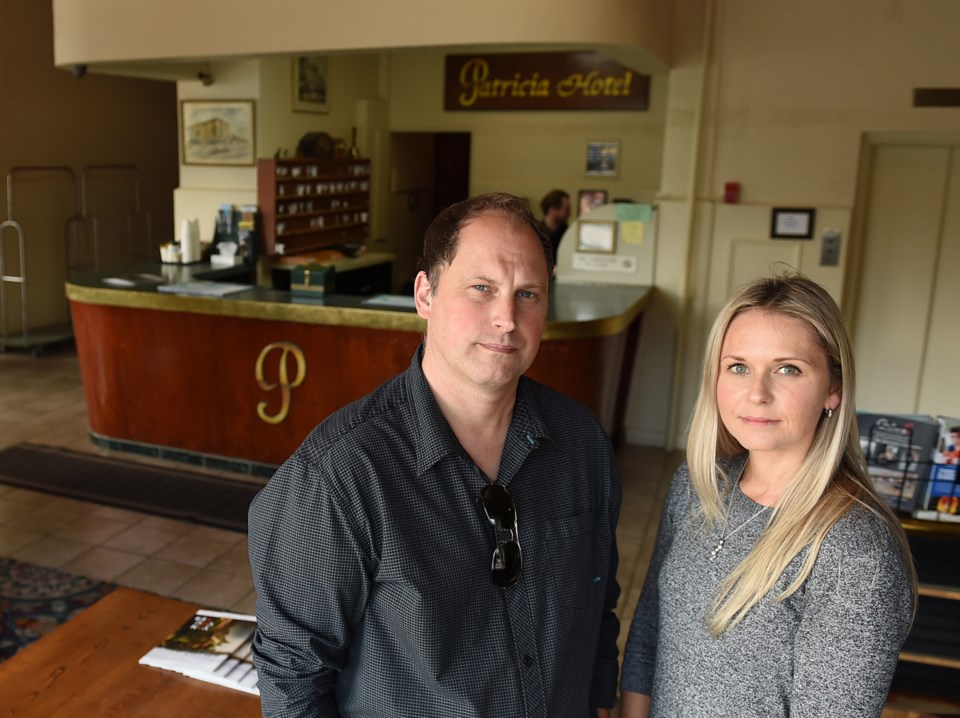 A hotel manager of a family-run tourist hotel in the Downtown Eastside says the increase in public disorder outside his doors is negatively affecting his business and wants the police and city officials to do something about it.

Daryl Nelson, whose family has owned the 106-year-old Patricia Hotel in the 400-block East Hastings for more than 20 years, took his frustrations to the Vancouver Police Board July 18 in an effort to get some action on the escalating mayhem in the neighbourhood.

“There has been an increase in thefts from vehicles in our parking lot, our property and interactions and altercations that staff have to deal with on a regular basis have escalated to levels of violence that we have not seen before,” Nelson told the board, which is chaired by Mayor Kennedy Stewart.

“This is also an issue that has unfortunately been observed and commented on regularly by the travellers that we accommodate throughout the year.”

The hotel is a couple blocks east of Main and Hastings and along a strip populated by vendors, drug dealers, the homeless and people living with drug addictions and mental illness.

A couple blocks north of the hotel is Oppenheimer Park, which is home to a tent city of homeless people and was the scene of a gun fight a couple of weeks ago, which prompted Vancouver police to issue a news release July 11 regarding safety of the public.

“There has been a sharp increase in the level of violence in and around the encampment,” said Sgt. Jason Robillard in the release. “Police are responding to several 911 calls in the park every day and we are very concerned about the safety of the people staying there, our officers, firefighters and City of Vancouver staff.”

Nelson acknowledged staff at the 195-room hotel, which also has a pub, have always had to defend the neighbourhood to tourists and quell concerns, “which we have done fairly well in the past.”

“However the number of cancellations, complaints and tourists aggressively looking to obtain refunds as a result of the neighbourhood has spiked this year to levels we have never seen before,” he said.

Tourists are writing poor reviews based on the Patricia's location and it is affecting the hotel’s relationship with online hotel booking sites, namely Expedia and Booking.com, he said.

“And as a result, our reputation with them as a trusted accommodation is being tarnished and our visibility on their sites has been reduced,” said Nelson, whose sister Lindsay Thomas also attended the board meeting at the Vancouver police’s Cambie Street precinct.

A review from Maggie from Australia on Booking.com posted July 10 said, in part:

“As a solo female traveller, I felt uncomfortable leaving the hotel as there are so many homeless people living there. I could hear them all night, occasional arguments. Most seem to have mental health issues. All very distressing. Filth and urine smells, rubbish all over the footpath.”

Another review on the same website from Thomas from the United States posted the same day said, in part:

“The area around the hotel was occupied by homeless people and drug addicts. It was a little unnerving to walk around the area.”

In the past, Nelson said, service, cleanliness and pricing could overcome the negatives of the neighbourhood, which is part of Strathcona. That is no longer the case, he said.

He and his sister, who manages the front desk, told the Courier after the meeting the sheer volume of people on sidewalks along the strip is overwhelming for many tourists.

“Before they even get to the hotel, they’re already in a state of shock,” said Thomas, noting hotel guests are primarily from North America, with many in town to take a cruise.

“I don’t think that we have the solution. I wish that we did, and I wish that it was an easy one, but it’s obviously not, otherwise the problem wouldn’t exist.”

At the same time, Thomas added, more police presence and possibly a change in strategy or policy could reduce the disorder.

Added her brother: “I don’t know how officers can really deal with it sometimes without having maybe more of them on the street.”

In recent years, Nelson said, he and other members of his staff could talk to someone openly doing drugs outside the hotel’s doors and tell them to move along without a problem.

“Now we’re getting more resistance,” he said. “There’s definitely a shift in attitude.”

Added Thomas: “It’s never been an easy business to operate, but now it’s getting downright difficult.”

The hotel’s website doesn’t detail the level of poverty and drug activity in the neighbourhood, but does say it has “its share of social issues.”

“Strathcona is home to clinics, shelters, missions and support groups where people in need can receive shelter, food, medical care and assistance in dealing with difficult issues,” the website said.

Vancouver police statistics for June show Strathcona had 70 assaults, 106 thefts from vehicles, 11 robberies and 31 break-ins to residences and businesses.

Police Chief Adam Palmer and the mayor spoke to reporters after the board meeting about the challenges of policing the neighbourhood and addressing the entrenched poverty.

Palmer said when he was commander of the policing district that includes the hotel, he dealt with Daryl and Lindsay’s father Wayne frequently on the same social issues.

“Like 10 years ago, 11 to 12 years ago, so I’m very familiar with the Patricia and the issues, and I feel for them because they run an incredible business down there — it’s a great hotel and a great location,” said the chief, noting one of his senior officers would be following up with Daryl and Lindsay.

Stewart said the problems are “all related to housing in the end.” That’s why, he said, he and council continue to work to create more housing and lobby the provincial and federal governments to provide more money to build homes for people in need.

“That’s really what’s going to help people here — is to get housing that has the wraparound support services that we need,” the mayor said.

Palmer agreed: “Housing is key. Get them off the streets and give them a decent place to live.”

Asked whether he would recommend tourists visit the Main and Hastings neighbourhood, the mayor said he would be attending a show at a concert hall on East Hastings and planned to eat at a barbecue restaurant on the same street.

The Courier pointed out that he was familiar with the neighbourhood and not a tourist.

“Yeah, but who better to show an example than a mayor?” he replied.

Nelson said the family has no plans to sell the hotel, despite the challenges of the neighbourhood.

Added Nelson: “If things changed even just a little bit, it would make our lives a lot easier and I think the lives of a lot of people who live and work in that area.”