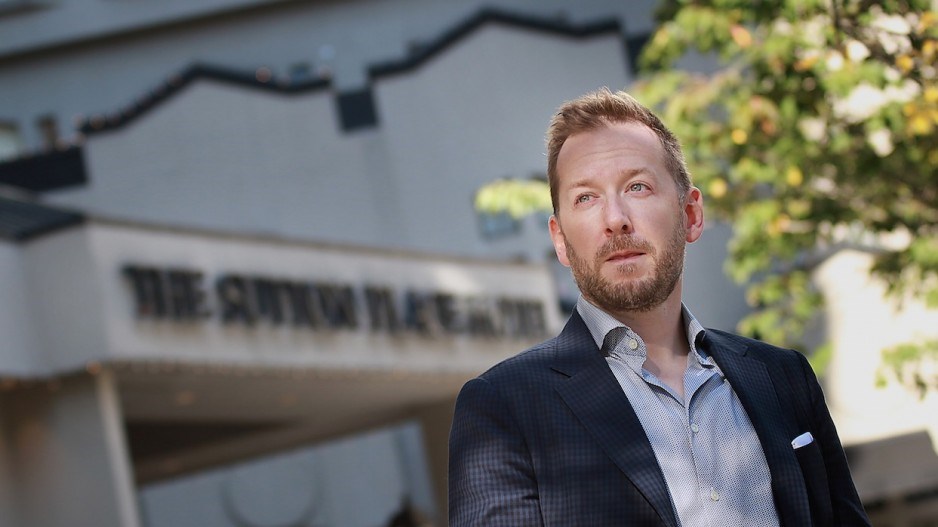 Alliance of Beverage Licensees executive director Jeff Guignard is grateful that he was able to find convention space on short notice at the Sutton Place Hotel. Rob Kruyt/Business in Vancouver

Jeff Guignard briefly panicked in late September when a manager at the Hyatt Regency Vancouver phoned him to cancel his organization’s long-planned B.C. Liquor Conference Oct. 20 to 21 because workers were picketing the hotel.

As executive director, Guignard had been planning his Alliance of Beverage Licensees’ fourth annual conference for nearly a year and had already paid the Hyatt about $30,000 in deposits.

“They kindly informed me that they were going to be able to refund me all of my money — but they were not able to host the conference,” he told Business in Vancouver.

“We were extraordinarily fortunate that the Sutton Place Hotel was available to accommodate us, or it would be massively disruptive for the conference. I’m immensely grateful. Their team handled it as well as they could have.”

Guignard is one of many corporate executives scrambling to find space after workers at the Hyatt Regency, Westin Bayshore and Pinnacle Hotel Harbourfront started striking on Sept. 19, and counterparts at the Rosewood Hotel Georgia joined them four days later.

Guignard said booking the Sutton Place will cost his organization about 10 per cent more than the $40,000 or so in hotel costs that he had anticipated spending for the conference. He will wind up with about 10 per cent less space.

The Sutton Place’s availability, however, averted the far more troublesome potential consequence of having to host the event on a different date.

“We’re already looking at planning our liquor conference in 2020,” he said. “This is something that I’ll be considering now — is there a chance of a labour strike?”

Other Hyatt corporate clients, such as the Retail Council of Canada (RCC), which is holding its Retail West conference on Oct. 16, plan to keep their event at the hotel and hope for the best.

If service is not up to expectations, RCC CEO Diane Brisebois told BIV, she may ask for a discount on the cost.

Moving the event, which is expected to draw up to 300 people, would be too difficult, she explained.

She had been in touch with the Fairmont Hotel Vancouver, where her organization has held events in the past, to see if there was space on that date in case it was needed.

On Sept. 22, Chera and the Rosewood made what she called the “mutual” decision for her to relocate the event.

Chera said that while the Rosewood Hotel Georgia returned her “thousands” of dollars in deposits, the shift to a new venue is prompting much extra work.

“We’re in a different room, and we have to renegotiate things again,” she said. “The audio-visual provider has to come back and give us a re-quote. Everything has to be redone.”

Workers at the Four Seasons Hotel are also without a contract but they are not striking because the hotel is set to close permanently in January.

Bargaining has stopped at all of the hotels where workers are on strike, and there is no sign of any resolution soon.

The Greater Vancouver Hotel Employers’ Association filed an unfair-labour-practice complaint against the union, alleging bad-faith bargaining by sending a representative to the negotiating table who did not have the authority to enter into a collective agreement.

“We remain hopeful that Unite Here [Local 40] will soon return to the negotiation table in good faith so we may fairly negotiate with our colleagues’ best interests in mind,” the Hyatt’s vice-president of labour relations for the Americas, Michael D’Angelo, told BIV in a statement.

The hotels have offered workers a 15 per cent pay increase over four years — higher than what management offered the last time workers went on strike.

That offer followed a vote by workers in 2000 to reject an offer of a one per cent pay increase over three years. Workers then held out for a 12 per cent increase over four years. Mediation ensued and, after a 24-day work stoppage, a deal was hatched that was not made public.

Back in 2019, management has also proposed that it strengthen health and safety resources, including personal distress devices, and maintain health benefits with no premium or copay increases.

The union said that it wants more job security, but management has said that it is already unable to subcontract services.

One victory for the union was that the B.C. Labour Relations Board ruled that the hotels are not able to use newly hired managers to perform work that would have been done by the striking workers.