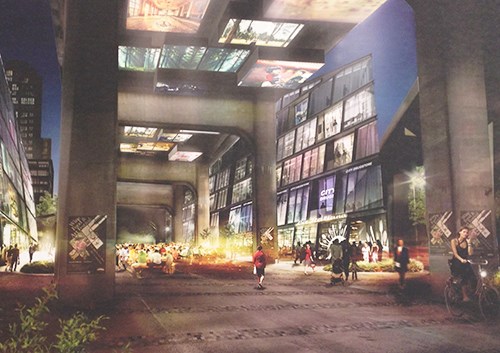 Students from Emily Carr University will help curate a lightbox exhibition of changing photos on the underbelly of the Granville Bridge as part of Vancouver House.

The word is gwerk, as in “Vancouver has to stop resting on its laurels; it's got to gwerk it,” says Vancouver architect Trevor Boddy, the curator of an exhibition, Gesamtkunstwerk, which chronicles the evolution of what is hoped to be the next “special moment” in Vancouver's architectural history.

Or here's another example from Boddy: “'My office needs a real gwerk,' which means a total redesign.”

Thank goodness the developers are giving us the new word because, otherwise, few of would be able to pronounce, let alone remember, gesamtkunstwerk. It's a German word, popularized by the composer Richard Wagner, that translates into something like total work of art or synthesis of the arts.

Those are the words on the side of the building next to the Granville Bridge where the exhibit is being held. And while people have seen drawings of the gleaming twisting condo tower that will rise next to it, it's what's happening under the bridge that gives the concept a totally radical reputation.

Introducing the new Beach District, a new urban village that will run under the bridge along Beach Avenue. It's going to be a collection of pie-shaped buildings that include rental apartments, offices and retail outlets. It will also be providing the nine o'clock gun a run for its time-keeping money. At nine o'clock every night, a spinning chandelier by artist Rodney Graham will twirl its way down over the street from its base underneath the bridge, dazzle the crowd and then twist back up into its perch for another day. But it won't be the only time people walking under the bridge will want to look up. Westbank, the company behind Vancouver House, is commissioning a second installation of public art on the underside of the bridge. The light boxes will display a changing exhibit of photos produced with students from Emily Carr University.

People talk about the amazing planning that's happening in Vancouver but they don't talk about the moments that are very special,” Ian Gillespie, the principal at Westbank, said at a press conference moments after spring officially arrived in Vancouver. “What we lack are a few special moments and this is what Vancouver House will represent. It will be one of the lasting things that stays in [visitors'] minds.... Can we turn the Granville Street Bridge into a moment itself?”

James Cheng is the architect who nursed the concept from the time when it was a glint in Westbank's eye seven years ago until last October, when the City of Vancouver gave it its blessing. Cheng, who worked with Arthur Erickson during the “mind-blowing” years of exciting development, has passed on the project to Bjarke Ingels whose Copenhagen- and New York-based firm, BIG, has been creating innovative and dynamic buildings around the world.

Cheng said the Vancouver we know today got its start in the 1970s when Mayor Art Phillips pulled together a team to think about what the city could be doing architecturally. The first projects centred on South False Creek, which blended the city's talent pool. Then the federal government bought into a plan to turn its lands on Granville Island into a thriving food, arts and theatre district. After Expo 86 came Concord Pacific's False Creek development, and then eyes turned to the downtown, with questions about how to turn Coal Harbour into a continuation of this waterside housing community.

But then we became a little complacent, a little too blasé about the accolades, Cheng said. We stopped creating special moments, which are like the punctuation marks of the city's evolution. (Joo Kim Tiah, the CEO of Holborn, has a jump on the desire to create Vancouver's iconic icon architectural image with his 63-storey Trump Tower and Hotel on West Georgia. Its slated to open in 2016.)

He noted there's five decades between Erickson, whose Project 56 drawing of twisting buildings straddling English Bay is part of the exhibit, and Ingels.

Ingels said first knew of Vancouver as the home of two of his favourite writers, Douglas Coupland and William Gibson. He wanted to see the city the spawned such fabulous thinkers.

Vancouver House was born out of the need to figure out how to deal with the bridge and the odd-shaped pieces of land underneath it, he said. The bridge couldn't be moved so the project had to work around it. The main condo tower starts on a 6,000 sq.ft. footprint at the base of Howe Street (where the Buster's Towing lot used to be) to honour setback requirements but once it's higher than the bridge, it starts to turn and add floor space until, at the top of its 52 storeys, its floorplate is 13,000 sq. ft.

We're turning it into an urban village,” Ingels said, with the bridge's underside becoming the canopy. It's where all aspects of life — art, landscape, design, culture, human interaction — come together. It gwerks.

The exhibit, which is free at 1460 Howe Street, runs until May 18. Construction is to begin next year, with Rodney Graham's spinning chandelier to be installed in 2017/2018.