Vancouver independents fail to make inroads on council, park and school board 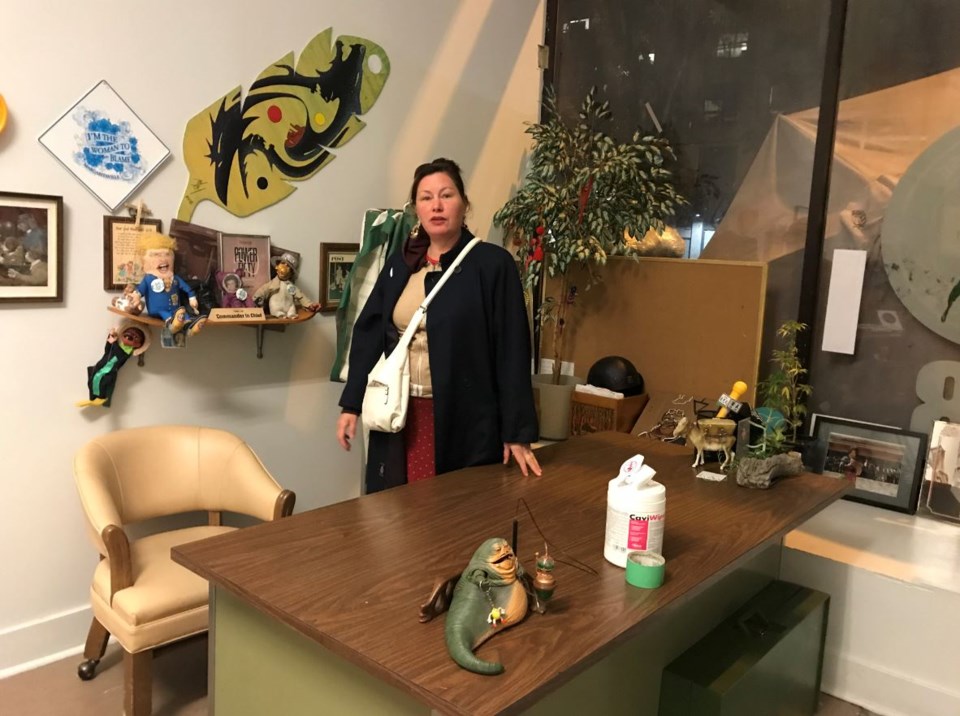 Sarah Blyth received the most votes of any independent council candidate, but it was not enough to earn a seat. Photo Sandra Thomas

Entering the Overdose Prevention Society on Hastings Street through the back alley, independent candidate Sarah Blyth warns this reporter, “Watch out for that mouse,” in response to the very large rat that scurried across our path.

It’s election night and Blyth heads to the office of the prevention society to watch the results surrounded by her campaign team and supporters from this Downtown Eastside neighbourhood. And while the back alley is relatively quiet, walking out the front door to Hastings Street the scene looks nothing short of a war zone. Men and women are sitting or lying on the ground, while an open-air market operates on the sidewalk as far as the eye can see. The smell of pot is strong, as is the reek of urine. Meanwhile, inside the society’s building, men and women grab seats at individual cubbyholes to inject drugs in what’s considered a safe space.

Blyth doesn’t blink an eye as she greets staffers, volunteers and addicts as we make our way next door where a makeshift TV, made up of a phone, a small speaker and projector, is showing the election results on a blank wall.

Blyth looks exhausted, but when asked what she could possibly do to help tackle the scene unfolding outside the door on Hastings Street, she doesn’t hesitate.

“Housing,” she says. “If you help people with housing you can help them get jobs. The money being spent down here needs to be used in the best way possible. And that means money for detox, housing and medicine.”

Blyth adds container housing is a great short-term solution, while long term plans are made, including getting the federal government involved in this city’s housing shortage. Blyth admits during the evening that she’s feeling some nerves about the election results. Her confession is surprising considering that in her position as executive director of the Overdose Prevention Society, Blyth has had a lot of practise keeping calm in the midst of chaos — much of that life threatening.

When throwing her hat into the ring for city council, Blyth says she not only hoped she would win a seat, but regardless of the outcome, she wanted to use her campaign to start conversations about homelessness and addictions — in particular the opioid crisis. Blyth believes decriminalization will happen in the near future and that local governments across Canada are becoming more receptive to the idea of both overdose prevention and supervised injection sites.

“I’ve had many other candidates come down here to try and better understand what’s going on,” says Blyth. “But they have to understand it’s not about politics, it’s about people and they’re dying here at a shocking rate.”

Not able to stand by and do nothing, in the past three years Blyth became a central figure in setting up unsanctioned, supervised injection sites throughout the Downtown Eastside. Prior to that, Blyth was a two-term park board commissioner aligned with Vision Vancouver.

Blyth says no matter what the outcome of the election ended up to be, she’s pleased the opioid crisis received the attention it did.

And while many expected this 2018 municipal election to see a surge of independents, including Blyth, elected to office, that was not the case. In fact, with the exception of mayoral candidates Kennedy Stewart and rival Shauna Sylvester, the independents fared poorly right across the board.

When it came to council, Blyth landed in the 19th spot, far behind the 10 elected councillors, though she received the most votes of any independent council candidate, followed by independents Erin Shum and Adrian Crook.

It was the same with park board with independents Steven Nemetz, Cliff Relph and Victor Cuevas trailing the pack, with the exception of IDEA Vancouver’s Margaret Haugen in last place.

When it came to the school board, Morgane Oger fared better than many other independents beating out numerous candidates affiliated with a party but it was not enough to secure a spot as trustee.

All election results will be updated as the results are finalized at vancourier.com.