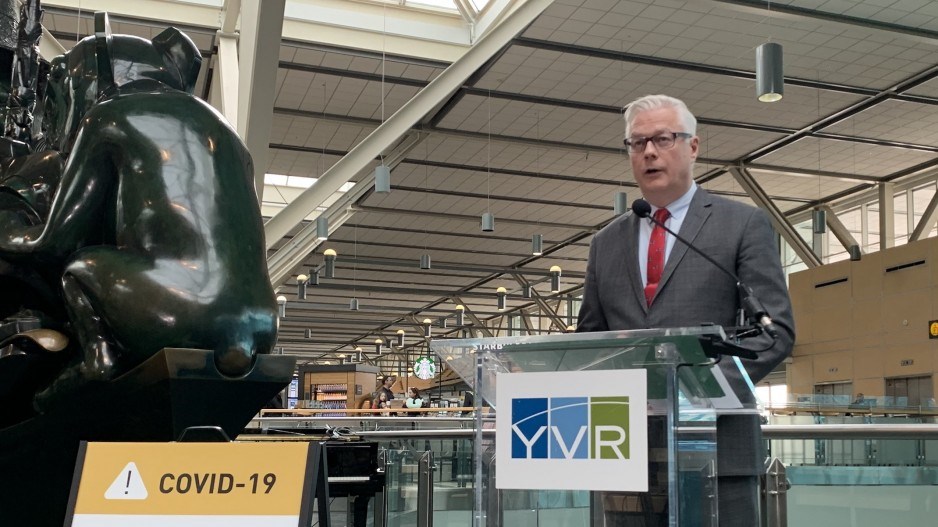 Craig Richmond speaks to media on March 17 next to signs that warn travellers that the Canadian government is advising against any non-essential travel. Photo Glen Korstrom/Business in Vancouver

What happened: Vancouver Airport Authority CEO Craig Richmond said the current crisis is broader and deeper than 9-11 but vowed to keep his airport open Vancouver International Airport (YVR) no matter how devastating the COVID-19 virus gets.

Why this matters: It's a sign of stability that key infrastructure can be relied on to stay open.

"We have a core team at the airport that will never close, come hell or high water or COVID-19," Richmond said. "We will stay open and be ready to take off again when people start travelling,"

He called the current situation unprecedented. "I have been through a lot – 9-11, SARS, all kinds of airline bankruptcies and near bankruptcies,  and consolidations, and nothing has ever been like."

Business in Vancouver asked Richmond about the Vancouver Airport Authority's capacity to withstand the shock to the economy and hit to the amount of people who are willing to travel, particularly given a recent briefing by DBRS Morningstar that suggested that the current crisis could prompt Canadian airport authorities to test their credit ratings and financial liquidity.

"We have a very strong financial situation with a double A credit rating, with money in the bank, with the ability to increase our lines of credit, so no, we're no more worried than any other business person would be worried given what we're facing in the world economy today," he said. "It's going to be a bad month but we'll come out the other side of this. One of the things we have to do as an airport is be ready to grab the upside again because the tourism economy is so important to the province of British Columbia."

YVR is one of four Canadian airports that the Canadian government has mandated that most international flights will be funnelled into.

Richmond said that all airlines flying to Canada will be required to conduct additional screening measures on passengers at the point of origin, and prevent all passengers who are symptomatic of COVID-19 from boarding flights.