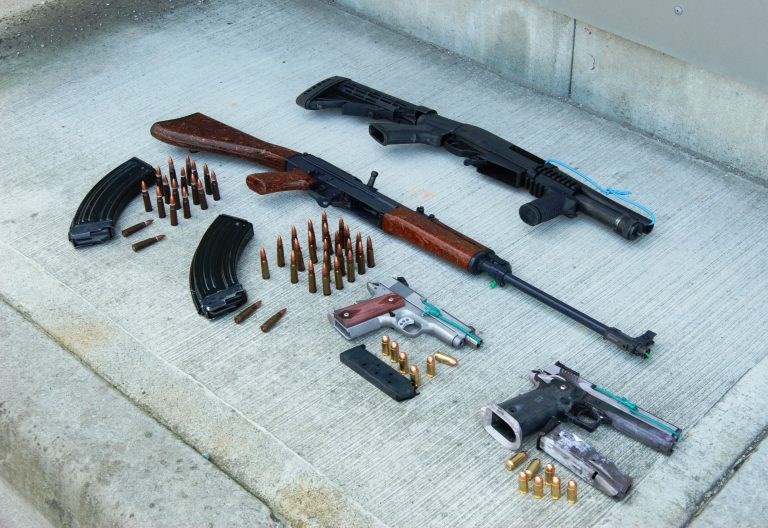 A joint-police investigation that targeted a Vancouver gang led to the seizure of four guns and seven arrests. Photo courtesy VPD

A 21-year-old Vancouver man who conspired with a teenager to set fire to a Kerrisdale real estate office in 2017 and participate in a drive-by shooting has been sentenced to almost five years in prison.

Simrat Singh Lally, who was arrested last year as part of a police crackdown on gang violence, pleaded guilty in December to arson and firearm charges and was sentenced March 8 in B.C. Supreme Court.

“Both the shooting conspiracy and the arson conspiracy carried with them the very real potential for property destruction, serious injury and death,” wrote Justice William Ehrcke in his reasons for judgment posted Friday on the court’s website.

“The fact that these potential harms did not occur is not due to any mitigating factors attributable to Mr. Lally, but rather to good police work.”

Lally, who had no previous criminal record and is a former cashier at Superstore, was 19 going on 20 at the time of the offences. He was arrested with four other men and two 17-year-old boys in a wide-ranging investigation dubbed Project Temper.

The investigation involved the Vancouver Police Department and the Combined Forces Special Enforcement Unit of B.C. and concluded with the seven arrests, the seizure of four guns, ammunition and various charges.

At the conclusion of the investigation, Supt. Mike Porteous of the Vancouver police told reporters the project resulted in the dismantling of a violent group that was based in the city.

The charges related to Lally date back to October 2017.

The offence of conspiring to commit arson occurred after the purported leader of the group, Taqdir Singh Gill, wanted a fire set to a Kerrisdale real estate office. Gill had a conflict with a person associated to the office, the document said.

The office was targeted because Gill believed the person’s son owed a significant amount of money to “Gill’s criminal bosses whom he often referred to in intercepted communication as the ‘cartel,’” the court document says.

Gill, who has since pleaded guilty to arson and firearms charges and was sentenced to six years in prison, hired a youth referred to as J.L. to commit the arson.

Lally agreed to drive J.L. to the real estate office on Oct. 13, 2017 in his Ford Explorer to commit the arson.

Shortly before midnight, police stopped the Explorer in the 2000-block of West 41st Avenue, around the corner from the real estate office. Police found two red jerry cans filled with gasoline on the floor behind the passenger seat. They also found a gym bag with a blowtorch inside.

Police did not arrest J.L and Lally, but towed the Explorer.

The next day, J.L. made a second attempt to commit the arson. Police stopped a vehicle driven by another man, who was with J.L., and seized gasoline and “incendiary devices.”

That same month, Gill, Lally, a youth referred to in the court document as S.K.K. and other persons conspired to shoot a firearm into the family residence of what the court document said were members of a rival street gang living near the 7100-block Fraser Street.

Lally agreed to drive S.K.K. to do the shooting but was stopped by police in the early morning hours of Oct. 26, 2017 shortly before the crime occurred.

Police seized a loaded CZ-858 rifle from the vehicle, which they said was an Explorer. (The court documents aren’t clear whether it was the same Explorer seized in connection with the arson).

Police said the gun had a magazine with 26 cartridges and its safety was in the “fire” position.

The arrest was not without incident. The vehicle fled after an officer switched on his emergency lights near Fraser Street and 57th Avenue.

Moments later, near 57th Avenue and Windsor Street, an officer drove his police SUV into the rear driver’s side quarter panel of the Explorer, spinning it 180 degrees. Police used a police dog to remove Lally and S.K.K. from the vehicle.

A month later, police executed a search warrant at Lally’s house in south Vancouver and found a sports bag in his bedroom containing a shotgun.

The bag contained four shotgun cartridges, four latex gloves and an empty .22-calibre ammunition box. In the attic of the garage, police found a cartridge magazine for a CZ-858 rifle—the same type of rifle police seized in October—loaded with 18 rounds of ammunition.

Police also found three Ziploc bags with 71 rounds of “loose ammunition,” including other rifle and nine-millimetre cartridges. Lally had never been licensed or authorized to possess firearms, or a holder of a registration certificate to possess a firearm.

The total sentence was five years, less 20 days in prison.

“I hope that Mr. Lally is sincere in the determination he expressed to the court and to his family today to lead a crime-free and productive life in the future,” Ehrcke said.