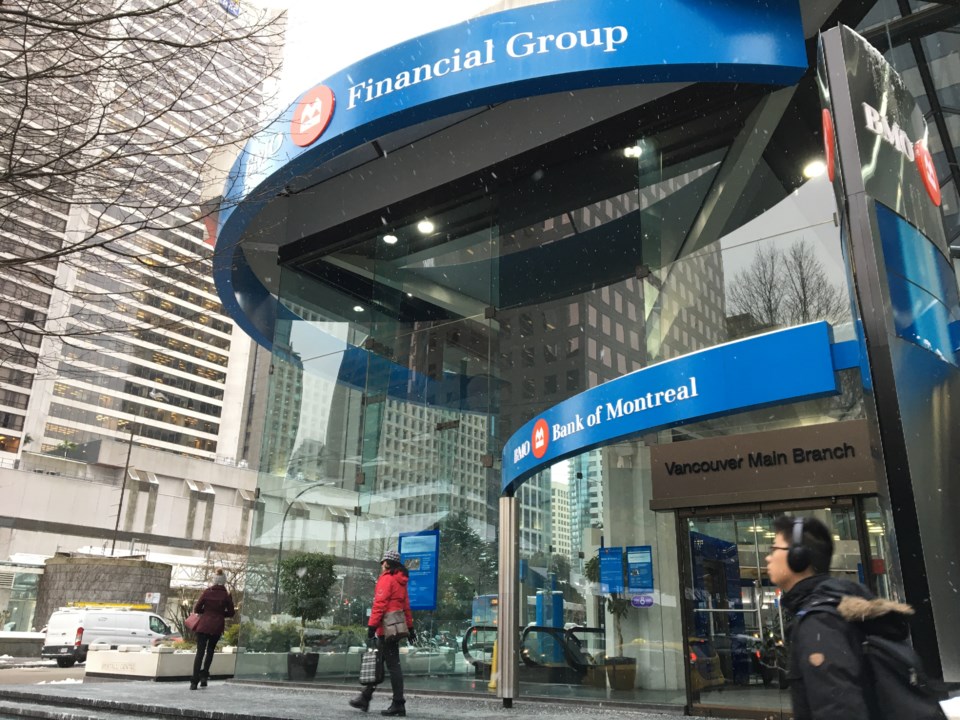 A 56-year-old Indigenous man and his 12-year-old granddaughter were arrested Dec. 20 at the Bank of Montreal’s downtown branch. Photo Dan Toulgoet

Mayor Kennedy Stewart is accusing the branch of a major Canadian bank of misleading Vancouver police in a 911 call that led to an Indigenous man and his 12-year-old granddaughter being handcuffed last month.

“I felt sick when I first heard about this incident and I find it unacceptable that the Bank of Montreal turned what should have been a positive occasion into one that reinforces our colonial past,” said Stewart in a statement issued Jan. 13.

“I am sad for the long-term impacts this may have on the child, her family and the broader community. BMO needs to do right by this family, take full responsibility for their actions and ensure this does not happen again.”

CBC News broke the story Jan. 9 involving Maxwell Johnson and his granddaughter, who were at the Bank of Montreal branch at Burrard and Dunsmuir streets Dec. 20 to open a bank account for the girl.

The CBC story said Johnson, 56, and his granddaughter used government-issued Indian Status cards, his birth certificate and her medical card in an attempt to open an account.

The story said an employee of the bank became suspicious and later asked Johnson and his granddaughter to come upstairs, where they were met by two Vancouver police officers.

“They came over and grabbed me and my granddaughter, took us to a police vehicle and handcuffed both of us, told us we were being detained and read us our rights,” Johnson told CBC reporter Angela Sterritt.

Johnson lives in Bella Bella, home to the Heiltsuk.

The Bank of Montreal issued a statement via Twitter in response to the story, saying the bank was reviewing what occurred, how it was handled and planned to use it as “a learning opportunity.”

“We value our long and special relationship with Indigenous communities,” the tweet said.

“Recently, an incident occurred that does not reflect us at our best. We deeply regret this and unequivocally apologize to all.”

The mayor, who doubles as chairperson of the Vancouver Police Board, said the officers and Police Chief Adam Palmer have apologized for the incident.

Stewart said Palmer “feels as badly as I do about how the misleading information provided by BMO staff led the officers who responded to take actions they did.”

The VPD said in a statement to the Courier that officers were called to the bank to investigate a fraud in progress.

“Both individuals who were identified by the bank as suspects were initially handcuffed while officers investigated the claim,” the VPD said.

“Officers confirmed the identity of the two individuals and confirmed that no criminal activity had occurred. The individuals were released and officers continued to complete the investigation and closed the call.”

Palmer said his officers were acting in good faith on the information supplied to them from the bank. He noted the officers are from diverse communities and were not racially profiling Johnson and his granddaughter.

“It takes a while to get to the bottom of these things, it doesn’t happen instantaneously,” the chief told CBC.

“It’s a very unfortunate situation and we’re very sorry the way that this all played out. Nobody wants to see a young girl in handcuffs — or anybody in handcuffs — when we know now after doing the investigation that there was no crime.”

Stewart said the incident will be reviewed by the police board, which oversees department policy. Two of the members of the board are Indigenous.

“I will have more to report as this process unfolds at the board, but what is clear right now is that no young person doing something as innocent as opening their first bank account should ever be put in this situation,” the mayor said.

“I will do everything I can to make sure this doesn’t happen again.”

The Office of the Police Complaint Commissioner announced Tuesday that it has ordered the Delta Police Department to investigate the incident.

'It is important that there be a thorough and independent investigation of this matter," said Deputy Police Complaint Commissioner Andrea Spindler in a news release.

"The investigation will carefully examine and assess the circumstances of this incident including the legal authority to detain, arrest and use restraing devices such as handcuffs, as well as any relevant questions of policy or training."

The VPD says its officers receive what is described as “cultural competency training.”

“This training is ongoing and always advancing,” the statement said.

“The VPD are always looking at ways to be better at what we do, and how to deal with each situation, especially sensitive issues and cultural differences.”

A Courier story posted in 2016 about the relationship between the VPD and Indigenous peoples indicated the department at the time had 24 Indigenous officers.