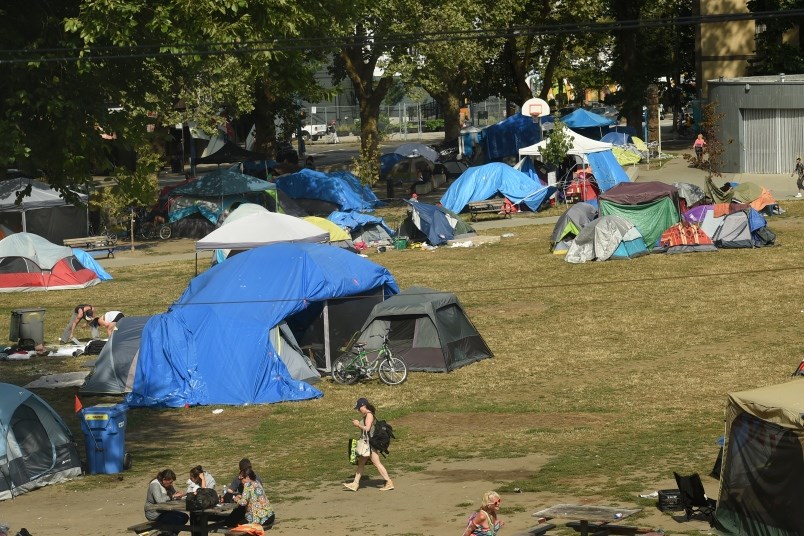 Homeless people remain in Oppenheimer Park while Mayor Kennedy Stewart calls for park board to delegate jurisdiction to the city. Photo Dan Toulgoet

Mayor Kennedy Stewart wants to put a plan in place to find housing for about 40 homeless people who remain in Oppenheimer Park but says he first needs the park board to temporarily hand over full jurisdiction of the green space to the city.

That plan, the mayor said at a news conference at city hall Wednesday, will involve negotiating with the provincial and federal governments for housing and possibly see the city seek a court injunction to clear the two-acre park in the Downtown Eastside.

Under the Vancouver Charter, the park board has exclusive jurisdiction and control of Oppenheimer. But unlike it did in 2014 when a similar-sized encampment took over the park, the board has not sought a court injunction to remove campers and their tents.

“What’s happening now has stalled and we do need to move forward with other options,” said Stewart, noting the number of people and tents in the park fluctuates daily but he estimated more than 40 people remain at Oppenheimer.

While B.C. Housing and the city have found housing for more than 120 people over recent months, and have shelter space available for those still in the park, Stewart said “some folks in the park may need a little nudge to move ahead.”

The mayor said without the city having full jurisdiction of the park “it’s hard for me to negotiate with the senior levels of government and be able to fully develop and implement a plan to return the park to normal operations.”

He didn’t elaborate on whether the plan involved the city or senior governments buying or leasing temporary housing, as it has in the past in addressing Vancouver’s growing homeless population.

Stewart said he informed Green Party park board commissioner Stuart Mackinnon, who is the board’s chairperson, last Friday about his desire to have the city take jurisdiction of Oppenheimer.

Mackinnon issued an emailed statement Wednesday saying the board will take the mayor’s request under consideration.

“As outlined by the Vancouver Charter, the park board maintains exclusive jurisdiction over the park, and the board is committed to ensuring the safety of all park users and the wider community,” Mackinnon said.

The mayor’s move requires resolutions from city council and the park board, with no less than two-thirds of each body voting in favour to proceed with such a change under the Vancouver Charter.

It remained unclear Wednesday whether Stewart will get enough support from councillors and park board commissioners to initiate his plan to return the tent-covered park to its intended use.

Green Party Coun. Pete Fry said he had to meet with fellow council and park board party members before deciding whether such a move was warranted. He said the mayor hadn’t consulted him or Green councillors Michael Wiebe and Adriane Carr about his plan.

“I would have preferred to have a little bit more of a heads-up from the mayor about what he was thinking,” Fry said.

“Obviously, we all like to work as a team but this approach kind of puts me in an awkward position – and the other councillors – because none of us really saw this coming. So that’s a little perplexing.”

NPA Coun. Sarah Kirby-Yung, a former park board commissioner, said in an email to the Courier that she wants to see the park board “step up and make a decision to enable fulfilment of the city’s plan to get everyone into housing and return the park and green space to the community.”

NPA Coun. Lisa Dominato said she has just learned of the mayor's proposal and said council had to be briefed and consulted.

"Regardless of jurisdiction, all levels of government need to work together to enable safe and secure housing for people camped in the park and we need to ensure the park can be used by all local residents," Dominato said in an email.

NPA park board commissioner John Coupar, who attended the mayor’s news conference at city hall Wednesday, said he believed it was unprecedented that a mayor would attempt to take jurisdiction away from the park board.

“What surprised me was I didn’t really hear any kind of a plan at all [from the mayor],” Coupar told the Courier. “He talked about talking to the provincial government and federal government, but he can do that now.”

Coupar acknowledged the park board “has been a little slower” in seeking an injunction, a move he said he would support.

“But I’m only one vote on the board,” he said, adding for legal reasons he couldn’t discuss whether the board had privately discussed whether to seek an injunction.

Last month, the park board issued an order to the more than 140 campers to vacate Oppenheimer. City workers and B.C. Housing said Aug. 26 that 127 people living in the park accepted housing offers.

The mayor described the level of violence in the park as “very, very troubling,” noting police responded to 500 calls, which is twice the amount for the same period last year.

One of those calls was for a gun fight.

Stewart said 20 tent fires had been reported and a female minor was assaulted by a 29-year-old man. Police have been vocal about their concern for the safety of campers, area residents, city workers, firefighters and their own officers.

Once the park is returned to normal operations, the mayor said, the park board would assume jurisdiction “and they can get on with the job that they do very, very well, which is maintaining our beautiful parks and operating regular services within parks.”

When the park board successfully sought an injunction in the fall of 2014, Vancouver police were required to physically remove some of the campers at Oppenheimer Park, which is bounded by Powell, Cordova, Dunlevy and Jackson streets.

Five people were arrested but no charges were laid.

Note: This story has been updated since first posted with a comment from NPA Coun. Lisa Dominato.